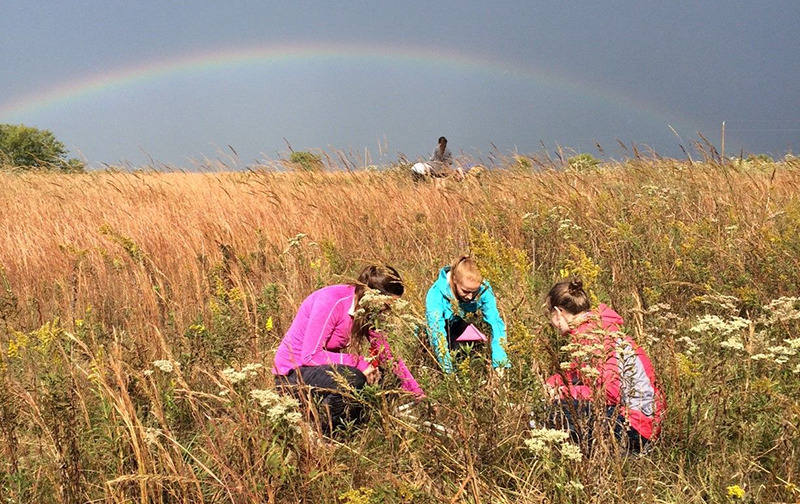 LAWRENCE — Across the U.S., farmers have abandoned millions of acres of land due to economics and hindrances such as dropping water tables that make irrigation of crops impossible. Since 2001, a longstanding study at the University of Kansas has improved researchers’ grasp of how to restore native prairie grassland on these abandoned lands and how restoration is influenced by agricultural inputs such as nitrogen.

“Farming destroyed the original prairie vegetation and altered the soil — so we look at how ecological communities rebound from those disturbances,” said Bryan Foster, professor of ecology & evolutionary biology and senior scientist with the Kansas Biological Survey, who is leading the research. “By doing so, especially over a long term, we learn how we might speed up that process to restore the native prairie ecosystem.”

The long-term investigation recently was re-funded by the National Science Foundation’s Long-Term Research in Environmental Biology (LTREB) program with a five-year, $360,000 grant.

The work takes place north of Lawrence at the University of Kansas Field Station, where Foster, along with colleagues, undergraduates and graduate students, carry out investigations on two experimental areas, each roughly the same size as a football field.

“This LTREB has two experiments, both located on an abandoned agricultural field that was used for farming for many, many years,” Foster said. “One of the experiments set up in 2001 on freshly abandoned agricultural land on plowed-bare soil looks at plant community redevelopment in response to nitrogen fertilization in that context. In the other, we look at manipulating fertilizer treatment in the existing vegetation of an abandoned hay field.”

Much of the research at the Biological Field Station focuses on the influence of nitrogen-based fertilizers on the plant community. While nitrogen is the primary nutrient for plants, excess nitrogen in the post-agricultural soil distorts the native prairie ecosystem, making restoration more difficult.

“Excess nitrogen leads to a loss in plant diversity,” Foster said. “We see this worldwide, beyond the Great Plains. Nitrogen is the most important nutrient to plant growth on land. But when you add excess nutrients, that favors only a few species that are good at accessing and utilizing it — and those plants out-compete other species. So, you simplify that system. It becomes dominated by a few species.”

In addition to past fertilization, abandoned farmland absorbs nitrogen from air and water pollution — impacting not just plants but the entire ecosystem.

“Pollution deposits nitrogen just falling on the landscape, coming from excess nitrogen in the atmosphere, mostly from industrial process and fossil fuel emissions,” Foster said. “Also, excess nitrogen dumped on landscapes from fertilizer gets in waterways. So, there are multiple sources of excess nitrogen making their way into aquatic systems and terrestrial systems and it impacting biodiversity — plants more directly, but with a cascading effect on insects that feed on plants and animals that eat the insects. Bacteria and fungi below ground are affected, too.”

The project Foster began in 2001 with Val Smith, the late professor of ecology & evolutionary biology at KU, who was a leader in aquatic ecology and co-primary investigator on the original grant that funded the project, now has monitored vegetation change post-agricultural plots for 16 years. According to Foster, the long-term nature of the study gives a unique insight into how tallgrass prairie throughout North America might recover that would be impossible with short-term research.

“The value of the data grows as they span decades,” he said. “Over the long term, we learn about how we might speed up that process to restore native prairie again. It’s proved to be difficult. You can restore it in a superficial way — get the dominant grasses re-established. But it’s difficult to establish the level of diversity, the sheer number of species. It’s often less diverse after disturbance, with less abundant broad-leaf wildflowers that we call ‘forbs.’ That’s the real challenge in restoration, to re-establish the original biodiversity.”

Moreover, the work at the KU Field Station has contributed to the training many undergraduate and graduate students who learn to carry out research through the NSF LTREB investigation.

“Because it’s a long-term experiment and federally funded, it has supported the research and involvement of over 60 undergraduates and 12 graduate students,” Foster said. “It’s benefited a lot of people. Every year we have grad students help us in the field, and a lot of them go on to do their own work there. We have students involved that have developed master’s and Ph.D. projects related to the long-term study.”