LAWRENCE — When his wife and artistic and faculty partner, Muriel Cohan, retired to emerita status in 2016, Professor of Dance Patrick Suzeau decided the show must go on alone.

He will present a solo dance titled “Night Visitor” as part of the Sibu International Dance Festival Aug. 29-Sept. 2 in Malaysia. 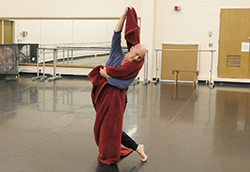 “I’m reworking a solo I performed last semester in the University Dance Company,” Suzeau said. “I was not totally pleased with the choreography, so I reworked it for this Borneo performance.

“I anticipate working next on another solo, as of yet untitled. I always have a bunch of things in mind.”

As for working solo after so many years as part of the Cohan/Suzeau duo, Suzeau admits “it’s hard.”

“On the other hand, you know what you can do,” he said. “To choreograph a solo is the hardest. Second is a duet. Third a trio, and so on. The more dancers you have, the easier it is to choreograph — to a point. You can do counterpoint and canon with groups. You can’t do that with a soloist.

“So it starts with an idea. It might be purely formal or conceptual. Formal meaning an abstract dance dealing with harmony of movements into space. Conceptual meaning you have an idea you want to convey; then you spend hours in the studio until something comes up.”

As opposed to the beginning of his career, Suzeau said, the current technological ease of video recording makes self-evaluation much easier.

One thing that has not changed is Suzeau’s love of Asia. Over the years, he has studied, danced and taught in India, China, Singapore and most often Malaysia. Then again, he has also worked in Europe, Australia and throughout North America.

Suzeau, who trained in ballet at the Juilliard School, among other places, became enamored of Indian classical dance starting with a yearlong study trip in 1971. He has returned several times since.

“It’s a man who falls asleep and has a sensuous dream, so there’s a pillow and a blanket, and the blanket almost becomes a partner,” he said. “It’s interesting for me to work with the blanket. It’s an unusual element, so it had to make sense. It had to have a certain plasticity. When you have a prop onstage, it’s got to be used in a significant way so it has visual appeal and emotional resonance.

“So the piece is about someone – not about a blanket. The soloist goes away and constantly goes back to the blanket.”

Suzeau said he looks forward to returning to Sibu for the International Dance Festival, where, in the past, he has been the only U.S. dancer.