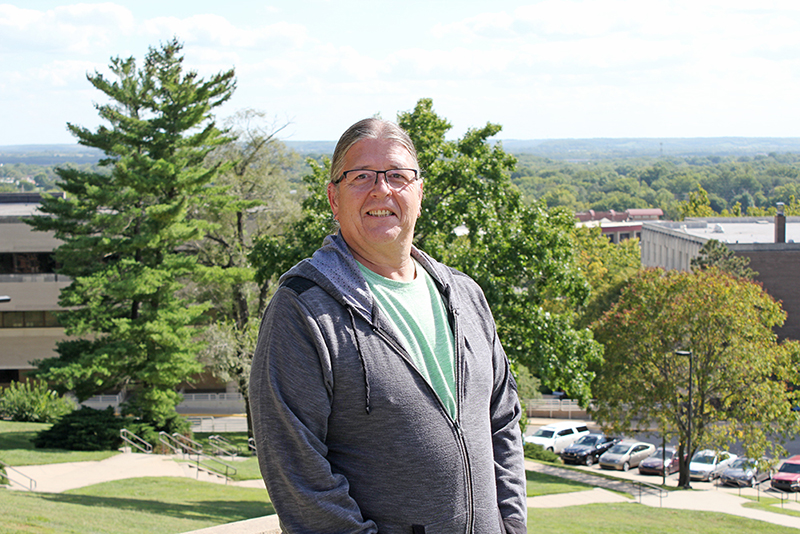 LAWRENCE — The theme for the American Studies Association’s 2016 convention, “Home/Not Home: Centering American Studies Where We Are,” had been chosen months before, and Robert Warrior, its then-president and University of Kansas Hall Distinguished Professor of American Literature & Culture, had begun composing his remarks shortly thereafter.

But by the time the convention in Denver rolled around Nov. 17-20, Donald Trump had just been elected the 45th president of the United States, and the program themes seemed to take on new resonances.

While a handful of participants dropped out, saying they couldn’t feign normalcy in their anguish and dismay over Trump’s election, most, Warrior said, found comfort in the solidarity of like-minded academic colleagues.

Warrior gave his address as planned, touching on the communal home his gay brother found in San Francisco before dying of complications from AIDS in the 1990s, the then-extant protest camp against an oil pipeline near the Standing Rock Sioux Reservation in North Dakota and the controversy over the non-hiring of Steven Salaita by the University of Illinois at Urbana-Champaign, which was a significant factor in Warrior’s decision to seek out a new academic institution.

He landed in Kansas, his home state (he’s a native of Wichita) and home territory of the Osage Nation, of which he is a member.

An edited version of Warrior’s address was published in the June edition of the ASA’s American Quarterly.

Parts are strikingly personal, as when Warrior writes about his grandfather, also named Robert Warrior, having been killed as a U.S. Army soldier in France during World War II. The elder Robert Warrior’s remains were first buried in a military cemetery in France, then exhumed and returned to his native Oklahoma. Professor Warrior links that ordeal to his own efforts to bring a portion of his late brother’s cremains home to a family cemetery after his death.

Parts of the article are strictly professional, as Warrior contrasts the state of the association with that outlined by Mary Helen Washington in her presidential address two decades before. Warrior cites participation figures showing that American studies, as a discipline, has come a long way toward becoming home for scholars in a growing number of fields, including Native American and indigenous studies, African-American studies, queer studies and Chicano/a studies.

But then Warrior describes how he departed the American Indian Studies Program at the University of Illinois at Urbana-Champaign in the wake of what he called a scandal and an “international controversy” over the non-hiring of Salaita. In the summer of 2014, Salaita quit his job as a tenured associate professor of English at Virginia Tech to accept a position in the AIS department Warrior chaired. Yet the job offer was withdrawn by the Illinois chancellor, who seemed to succumb to pressure from those incensed over some of Salaita’s tweets critical of Israel and Zionism during that year’s armed conflict between the Jewish state and Hamas in Gaza.

Warrior describes a subsequent hollowing out of the AIS program at University of Illinois at Urbana-Champaign — he was the last remaining core faculty member when he left, and the program remains at zero core faculty now over a year later — and his own exodus for Kansas.

“One truth that emerges from the experience of what happened to Steven Salaita at Illinois is the ease with which our institutional homes can become not home,” Warrior writes.

Warrior wishes for his former colleagues safe academic spaces from which to do their work but also advocates for the constant discomfort of minority status, from which a critical perspective can be maintained, as postulated by one of Warrior’s academic mentors, the late Edward Said.

In the case of Standing Rock and elsewhere, Warrior argues that the natural environment deserves personhood status, with rights that must be considered in any controversy like the one surrounding the Dakota Access Pipeline.

“In Mauna Kea in Hawaii, where they are trying to stop the building of a gigantic telescope, Native Hawaiian people regard that mountain as a person,” Warrior said.

Environmental controversies, Warrior said, engender “a kind of radicalism that brings out radical political action, which is familiar to people, but what’s prompting it? People don’t necessarily see those underlying motivations in the indigenous world. People see a common thread in Ferguson, Palestine, Charlottesville, Standing Rock, Mauna Kea. There is a kinship between the defenders in these places.

“The challenge for me, as a scholar, is to articulate the basis of what it is that’s prompting this particular kind of relationship the person is having to a place, especially among indigenous people who step forward to defend not only themselves and other humans, but rivers, mountains, valleys, creeks and streams. The consciousness is different, but not so much that connections aren’t possible to make — the water that people at Standing Rock were defending is related, after all, to the water in Flint, Michigan, that threatened the health and well-being of both people and places. It comes back to what a person’s idea of home is.”