LAWRENCE — Flint's lead-contaminated water crisis caused fewer babies being born there — through reduced fertility rates and higher fetal death rates — compared with other Michigan cities during that time, according to a working paper that includes a University of Kansas researcher. 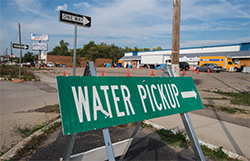 "Having children in America is expensive and resource-intensive, and we want people to have the number of children they want when they want to have them. We, as Americans, are very much about individual people getting to make the choices that are the best for their families, and this is one of the most fundamental ones," said David Slusky, assistant professor of economics.

The research by Slusky and co-author Daniel Grossman, assistant professor of economics at West Virginia University, appears in a working paper distributed as part of the KU Economics Department’s Working Papers Series in Theoretical and Applied Economics.

Since 2014, Flint — which was once an automobile manufacturing powerhouse outside of Detroit — has faced a major public health emergency due to lead poisoning in the local water supply when the city temporarily used the Flint River as its primary source. The crisis has affected thousands of residents, and some officials in Michigan face criminal charges related to events there.

In response to the contamination and amid efforts to establish a registry of residents exposed, the researchers as part of the working paper examined Michigan birth and death certificates issued in Flint and comparable Michigan cities both several years before Flint's water change and after its use of contaminated water in April 2014.

In examining the variation in timing of births they found fertility rates decreased by 12 percent among Flint women, and fetal death rates increased by 58 percent. The overall health of Flint children at birth decreased as well compared with children from other Michigan cities.

"This represents a couple hundred fewer children born that otherwise would have been," Slusky said.

A good portion of the study focuses on eliminating other potential causes for the reduction in fertility and birth rates in Flint, especially because the effects of lead in water on fertility and birth outcomes are not well-established, though the effects of lead poisoning have been found to be harmful and unhealthy in many different ways, Slusky said.

As a medical mechanism for how lead can interfere with fertility and birth rates, one of the key pieces of past research on the topic is evidence American pharmacists in the early 20th century prescribed lead pills to women who wanted to have abortions.

Slusky said the researchers also examined Google Trends data to see when Flint residents compared with other Michigan residents began online searches related to "lead" and "lead poisoning," which would indicate concern about the effects of lead in the water. If people were worried about it, it could influence their behavior related to deciding to have children, he said.

Instead, the researchers saw no increase in Flint residents conducting online searches about lead poisoning until research on lead in Flint finally began coming out in September 2015.

"During most of our time period when the city officials were saying there was no problem, we didn't see any evidence of knowledge about lead in the water," Slusky said.

According to the American Time Use Survey, the researchers also found that Flint residents did not report any less sexual activity during this period. However, the birth and fertility rates did decrease in Flint compared with the other Michigan cities.

"We find no evidence of avoidance behavior," Slusky said. "Either Flint residents were unable to conceive children, or women were having more miscarriages during this time."

Other supporting evidence they found included a higher ratio of girls born in Flint during this time, because there is evidence male fetuses are more fragile, he said.

Aside from fertility issues, the city's use of contaminated water likely affected children who were born as well. The researchers found a 5 percent decline in average birth weight of babies born in Flint compared with other Michigan children after accounting for potential selection effects where lead caused the mothers with the smallest fetuses to miscarry or have stillbirths.

The implications of the Flint environmental crisis provide wide-ranging lessons for cities and states, Slusky said. Lead poisoning is still a concern in most communities, especially in the use of older lead pipes for infrastructure or older homes that might have lead paint.

Many cities use an anticorrosive agent, for example, on pipes to keep the water from being contaminated with high levels of lead to avoid potential complications on fertility and birth rates and cognitive development.

"It's everywhere from pipes to paint in houses. Gasoline is nondurable, so it was much easier to stop putting it in gasoline," Slusky said. "In pipes and paint, it's still there."

Flint also provides a lesson in the role of public health and environmental oversight. Much of the work uncovering the dangerous levels of contamination in Flint came from private engineering and health professionals during a time when city leaders said the water was fine, Sluksy said. This could be an important lesson concerning government funding of agencies such as the Environmental Protection Agency and other federal and state bodies responsible for environmental inspections and oversight.

"In the future we would like to have a government that is more responsive and more active in ensuring that the water," Slusky said, "that comes out of people's taps is safe."