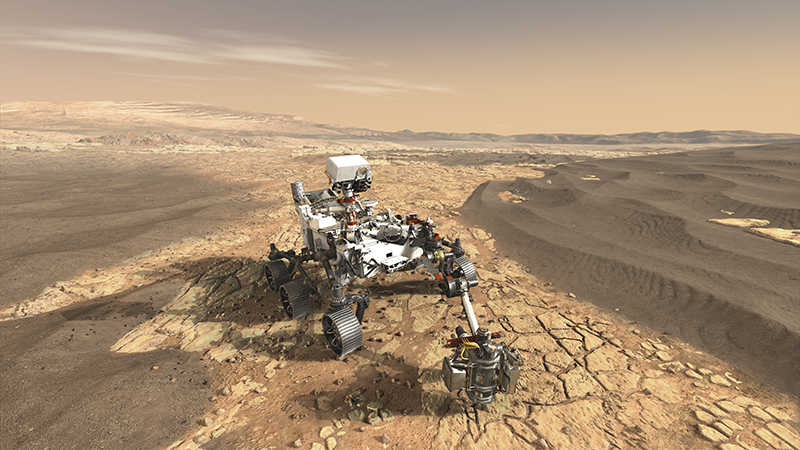 LAWRENCE — The search for biology on neighbor planet Mars won’t play out like a Hollywood movie starring little green men. Rather, many scientists agree if there was life on the Red Planet, it probably will present itself as fossilized bacteria. To find it, astrobiologists likely will need to decode the chemical analysis of rock samples performed by a rover (like the one NASA plans to send to Mars in 2020). Only then might humankind know conclusively that life exists beyond Earth. 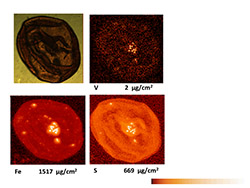 A new paper in the journal Astrobiology suggests NASA and others hunting for proof of Martian biology in the form of “microfossils” could use the element vanadium in combination with Raman spectroscopy on organic material as biosignatures to confirm traces of extraterrestrial life.

“You’ve got your work cut out if you’re looking at ancient sedimentary rock for microfossils here on Earth —  and even more so on Mars,” said Craig Marshall, the paper’s lead author and an associate professor of geology at the University of Kansas. “On Earth, the rocks have been here for 3.5 billion years, and tectonic collisions and realignments have put a lot of stress and pressure on rocks. Also, these rocks can get buried, and temperature increases with depth.” 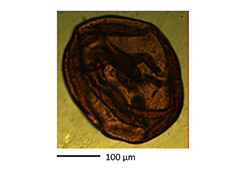 Marshall likens a potential ancient Martian microorganism to a cut of steak from the supermarket in a pressure cooker.

“You can see a steak looks biological — there’s blood dripping from it,” he said. “Then, you put it in a pressure cooker for very long time, and you end up with charcoal. It could be abiotic charcoal, or it could be made from heat and pressure on organic materials. A lot of biological compounds get destroyed and ripped apart from heat and pressure, and you’re left with carbon residue. We can see this carbon with Raman spectroscopy.”

Indeed, for some time paleontologists and astrobiologists hunting for bits of life on Mars have made use of Raman spectroscopy, a technique that can reveal the cellular composition of a sample.

“People say, ‘If it looks like life and has a Raman signal of carbon, then we have life,’” Marshall said. “But, of course, we know there can be carbonaceous materials made in other processes — like in hydrothermal vents — consistent with looking like microfossils that also have some carbon signal. People also make wonderful carbon structures artificially that look like microfossils — exactly the same. So, we’re at a juncture now where it’s really hard to tell if there’s life only based on morphology and Raman spectroscopy.”

In the new paper, Marshall and his co-authors offer a path toward ironclad verification that microfossils once were alive. According to the researchers, the proposed technique could be possible to perform with instrumentation already planned for the NASA 2020 rover mission to explore areas of Mars where the ancient environment could have fostered microbial life.

“We applied a new technique called X-ray fluorescence microscopy — it looks at elemental composition,” said Marshall. “Vanadium is an element in the periodic table, a transition metal. It’s been shown it can substitute into biological compounds. If you can’t unambiguously assign if something is biology or not with morphology and Raman spectroscopy in tandem — maybe we could look for a known biological element, like vanadium. Then, if the material that looked like a microfossil, and looked carbonaceous with Raman spectroscopy — and had vanadium — that’s a new way forward for finding out if something really was biology.”

According to the researchers, vanadium can be found in crude oil, asphalt and black shale, formed from acknowledged biological sources.

“Vanadium gets complexed in the chlorophyll molecule,” Marshall said. “Chlorophylls typically have magnesium at the center — under burial, vanadium replaces the magnesium. The chlorophyll molecule gets entangled within the carbonaceous material, thus preserving the vanadium. It’s like if you have a rope stored in your garage and before you put it away you wrap it so you can unravel it the next time you need it. But over time on the garage floor it becomes tangled, things get caught in it. Even when you shake that rope hard, things don’t come out. It’s a tangled mess. Similarly, if you look at carbonaceous material there’s a tangled mess of sheets of carbon and you’ve got the vanadium mixed in.”

Marshall and his colleagues proved the concept of testing for vanadium on known microfossils with acknowledged biological origins on Earth — organic microfossils called acritarchs that might not be far from the kinds of traces of life possibly existing on the Red Planet.

“We tested acritarchs to do a proof-of-concept on a microfossil where there’s no shadow of a doubt that we’re looking at preserved ancient biology,” Marshall said. “The age of this microfossil we think is Devonian. These guys are aquatic microorganisms — they’re thought to be microalgae, a eukaryotic cell, more advanced than bacterial. We found the vanadium content you’d expect in cyanobacterial material.”

The work was supported by an ARC International Research Grant (IREX) looking for biosignatures for extracellular life, the Australian Synchrotron, and the Department of Energy at the Advanced Photon Source, Argonne National Laboratory.

When Marshall was an ARC Fellow at the University of Sydney, prior to coming to KU, he worked with co-author Lay’s group.

“We plan to undertake further Raman spectroscopic work on the carbonaceous materials using nanospectroscopic imaging,” Lay said. “This research is also of interest to researchers in the European space program on the Mars Explorer, since another investigator on the ARC grant, although not working on this aspect, was Howell Edwards, who was involved in instrumentation for the Mars Explorer.”

“Hopefully someone at NASA reads the paper,” said Marshall. “Interestingly enough, the scientist who is lead primary investigator for the X-ray spectrometer for the space probe, they call it the PIXL, was his first graduate student from Macquarie University, before his KU times. I think I’ll email her the paper and say, ‘This might be of interest.’”

Top Photo: A rendering of the Mars 20/20 Rover, courtesy of NASA.

Top right photo: False-color micro-XRF distribution maps for V, Fe, and S of a single leiosphaerid. Maximal area densities are given in µg/cm2 for each element at the top of each map. The scatter is shown in the Sa, which can be used as an indicator of thickness and density of the sample.