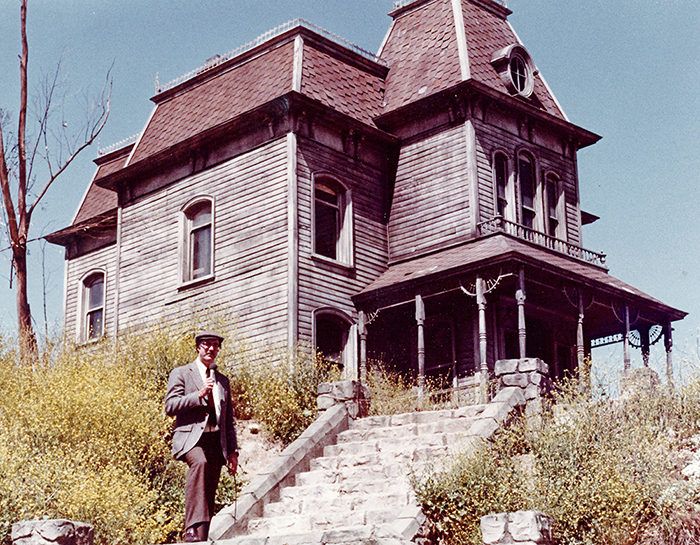 LAWRENCE — Was it a case of one morbid, perverse soul speaking to another?

That’s one explanation for the effect that the 1920 play “Mary Rose” by “Peter Pan” author J.M. Barrie had on a young Alfred Hitchcock.

John Tibbetts, associate professor of film & media studies, raises the question in a new article in the latest issue of the journal Post Script: Essays in Film and the Humanities.

“We assume that everything has already been written and said about Alfred Hitchcock,” Tibbetts said. “He’s been critiqued and analyzed inside out, back and forth, from top to bottom and back again. But I feel that his encounter with a little-known play called ‘Mary Rose,’ a ghost story that he saw as a young man in London, so profoundly affected him that no study of him is complete without examining it and its effects on his films. I have attempted to do that here.”

Tibbetts argues that Hitchcock employed characters, plot points and musical elements from “Mary Rose” throughout his directorial career. It’s the most in-depth exploration yet of the connections among Hitchcock, the play and the play’s author, Barrie. In particular, the films in question here are several of Hitchcock’s most popular, including “Vertigo.”

“It wasn’t just the play that had such a resonance with Hitchcock,” Tibbetts said, “it was with the playwright Barrie himself, with whom Hitchcock shared biographical and psychological affinities, including an attraction to the ghostly, a vision of women as dangerous, seductive, yet sexually unattainable and a morbid view that love and death were intermingled.”

Indeed, the two men were able to express in their respective works sexual and psychological frustrations and dysfunctions.

Actress Tippi Hedren’s famous claim that Hitchcock sexually assaulted her in her dressing room during the filming of “Marnie,” a film whose heroine echoes the titular character in “Mary Rose,” is only the tip of the iceberg, so to speak, when it comes to psychoanalyzing the misogyny of the Master of Suspense.

And while Hitchcock and Barrie apparently never met, their paths crossed, metaphorically speaking, in 1920.

“Hitchcock was a young man of 21 when he went to see a play in London, and it so impressed him that he determined he was going to make a film adaptation of the play, ‘Mary Rose,’” Tibbetts said. “He never made the film, but he invested elements of the play’s characters, plot, even the music score into many of his films.

“My article is called ‘Hitchcock and the “Call” of Mary Rose,’ and it refers to the fact that in the play, Mary Rose is a character who mysteriously disappears and reappears. It’s a fantasy, a ghost story, and each disappearance is heralded by a musical call, as it’s referred to in the play’s stage direction, and the sound has been likened to Debussy.

“Hitchcock all his life tried to find that music because it so impressed him. Whether he did or not is an aspect of some controversy. But with three of his composers for his movies, he talked to them and said, ‘I want this kind of music in my film,’ and he would talk to them about what he had heard. He was obsessed with this play.

Relatively little has been written about Hitchcock’s enduring interest in “Mary Rose,” which piqued Tibbetts’ interest.

“I got into what would Barrie and Hitchcock have in common besides this play, and I found a bunch of stuff,” Tibbetts said. “I don’t think Hitchcock ever met Barrie, but he knew intimately people who knew Barrie and who were important in Barrie’s career and who were important in the play ‘Mary Rose,’ one of whom was Daphne du Maurier, who was in Barrie’s circle of children. Hitchcock makes three or four movies based on Du Maurier stories — more than any other writer.”

Moreover, both men seemed to have been motivated by a sort of stunted sexuality. After producing a daughter, Tibbetts said, Hitchcock may have been celibate for the rest of his life, with his obesity perhaps a complicating factor. Biographers say Barrie was almost certainly impotent, and his marriage was never consummated.

Hitchcock became famous for the blonde “ice queen” heroines frequently featured – and tortured — in his films. Barrie’s focus on boys who were unable to grow up, enchanted islands and ghosts like Mary Rose is often seen as revelatory of his sexuality – or lack thereof.

“So Hitchcock is like Barrie in personality and creative juices,” Tibbetts said. “The article traces the parallels between them – the childlike temperament, the stories they were interested in.

“Small wonder, then, that Hitchcock responded to the play ‘Mary Rose.’ He was already attuned to the world Barrie wrote about.”