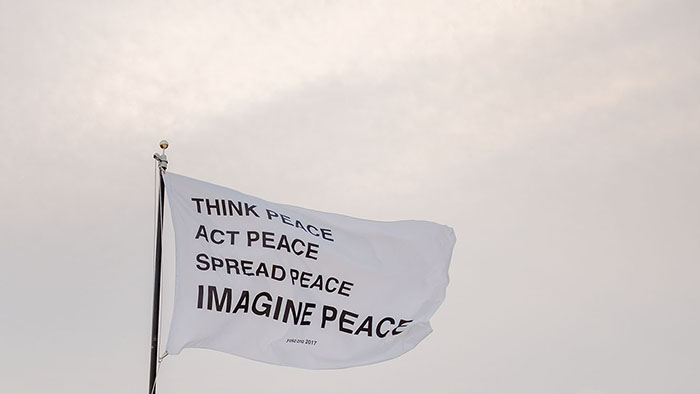 LAWRENCE — A new flag will fly in front of The Commons at Spooner Hall as part of a nationwide public art project, “Pledges of Allegiance,” commissioned by Creative Time, a New York–based public arts nonprofit. “Pledges of Allegiance” is a serialized commission of 16 flags, each created by an acclaimed artist to reflect the current political climate. The project began on Flag Day in June 2017 and will run through July 30, 2018. The Commons and the Spencer Museum of Art have partnered to host the project at the University of Kansas. The sixth public art work, a flag titled “IMAGINE PEACE” by multimedia artist Yoko Ono, will go on display today, Nov. 8, at 14th Street and Jayhawk Boulevard.

Across the United States, the work is being hoisted in partnership with 11 institutions at 14 locations nationwide. Each flag addresses an issue that the artist is passionate about and speaks to how the country might move forward collectively. Creative Time explains that the project “aims to inspire a sense of community among cultural institutions.” Current partners in the project include the Rhode Island School of Design Museum, Cornell’s Herbert F. Johnson Museum of Art and the Museum of Contemporary Art Detroit, among others. Of all participating institutions, KU is currently the farthest west that the project has been installed.

“We saw bringing these flags to Lawrence as a unique opportunity to model support for democratic exchange, allowing the community to come together over a range of topics,” Orr said.

The Commons, a partnership of the Spencer Museum of Art, the KU Biodiversity Institute and the Hall Center for the Humanities, is a co-organizer of the project and will also host related programming.

“The works in ‘Pledges of Allegiance’ raise significant topics that affect human life, within a framework of bringing people together in discussion,” said Emily Ryan, director of The Commons. “That is exactly the type of thing The Commons strives to do in creating a platform for all perspectives — to consider important topics in new and different ways.”

The Spencer Museum and The Commons will offer a series of programs to explore the themes raised by the project, and the community is encouraged to attend the raising of each new flag, which will be announced in advance.