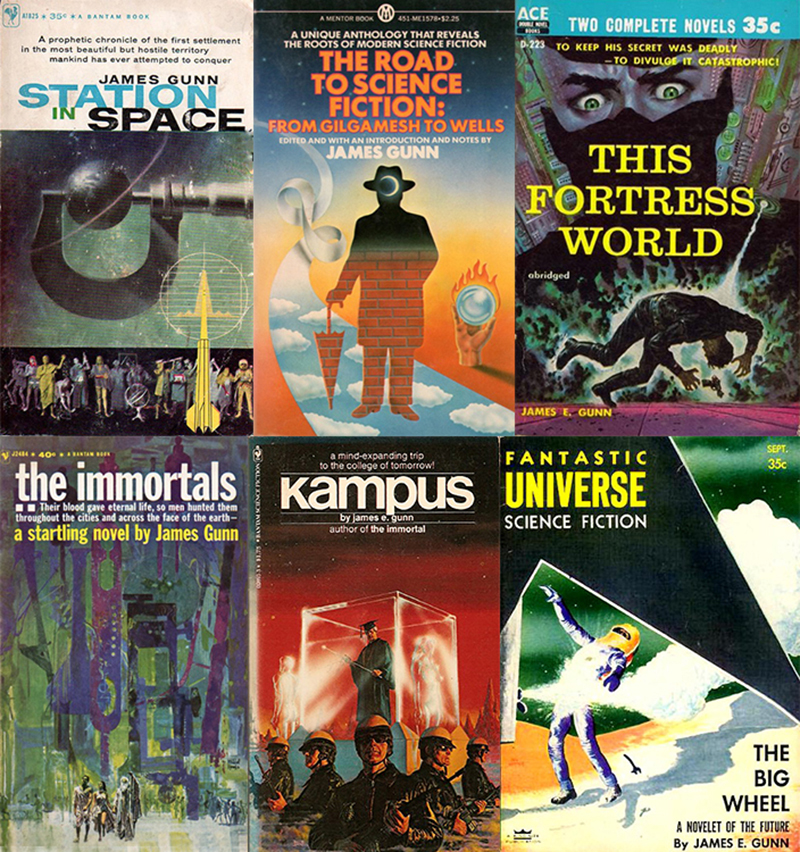 LAWRENCE — His characters have traveled the galaxies. He has traversed the globe, creating, studying and promoting science fiction. Now, at age 94, the dean of sci-fi authors, University of Kansas English Professor Emeritus James Gunn, has written a memoir detailing his long life in letters. 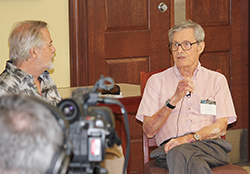 “Star-Begotten: A Life Lived in Science Fiction” (McFarland, 2017) contains Gunn’s reflections on a career that spans from science fiction’s Golden Age to the present. The genre’s biggest names – Heinlein, Asimov, Clarke – are all there because they were Gunn’s peers and colleagues.

“I got the title from a late novel written by H.G. Wells,” Gunn said. “It’s a non-science fiction-like novel -- a very quiet, earthbound discussion among ordinary people – one of whom has the conviction that people are being taken over by aliens or influenced in certain ways. It ends on a very surprising note that this narrator comes to believe that he himself is star-begotten, and that it’s all probably a good thing in changing human nature in a better way.”

Gunn recalls hearing Wells speak in 1937, when the father of sci-fi came through Gunn’s hometown, Kansas City, Missouri, on a lecture tour.

“My uncle John took my brother and me to Municipal Auditorium to hear Wells talk,” Gunn said. “I guess it made a great impression on me in spite of the fact he was a short, dumpy man at that time in his life with a high, squeaky voice. I don’t recall what he said, but the very fact that I was there hearing him say it may make me sort of star-begotten. I remember pushing forward through the crowd as Wells was coming through the audience, and I reached out to shake his hand, but he rushed by me without noticing. I hope maybe he’s looking down saying, ‘Maybe I did some good there.’ ”

Gunn has certainly had a noteworthy career in sci-fi, starting in the pulp-fiction era, publishing short stories in such magazines as Astounding Science Fiction, Thrilling Wonder Stories and Galaxy Science Fiction. He went on to write 28 novels, starting in 1955 with “Star Bridge” (with Jack Williamson, for Gnome Press) and continuing through 2017 with the finale of his trilogy: “Transcendental,” “Transgalactic” and “Transformation” (Tor).

As if that weren’t enough, Gunn maintained a career as an academic, teaching science fiction at KU starting in 1969. In 1982, the Gunn Center for the Study of Science Fiction was established at the university, hosting the annual Campbell Conference, giving out awards and otherwise serving as the genre’s home at KU. This year’s Campbell Conference was dedicated to Gunn’s work, and former students and editors participated.

Then there has been Gunn’s nonfiction work, perhaps most notably his 1975 “Alternate Worlds: The Illustrated History of Science Fiction” (Prentice Hall). He won a Hugo Award for his 1982 work “Isaac Asimov: The Foundations of Science Fiction” (Oxford University Press). And this century he edited a six-volume series titled “The Road to Science Fiction” (Signet), collecting milestone works in the genre.

Nor has his output ceased. In addition to Gunn's memoir, McFarland will also publish his 1951 thesis, “Modern Science Fiction: A Critical Analysis” (after 67 years), and a revised and updated edition of “Alternate Worlds” that Gunn is working on presently.

Gunn has traveled the world, spreading the gospel of science fiction, too. He visited the former Soviet Union, Iceland, Romania, Singapore, Taiwan and elsewhere as part of Cold War-era cultural-exchange efforts sponsored by the United States Information Agency.

It’s all been part of the ethos Gunn refers to as “Saving the World Through Science Fiction,” which is the title of Michael Page’s 2017 biography of him, also from McFarland. It means imagining new possibilities of being, preparing mankind to face the future.

Despite the volume of work he has produced, Gunn said he has never found writing to be easy.

“I have often made the point that writing is really hard work,” he said. “Lots of times I’ve sat in front of my typewriter or computer and felt really I’d rather be out mowing the lawn, doing manual labor, than trying to wrench ideas out of my head.

“But there is also the feeling that sitting there and turning concepts into language that is suitable is what I was cut out to do. I’ve told people that I feel I earn my place here on Earth each day when I am able to create something that wasn’t there before, and, in turn, some of these things enter stories that influence people.

“Just yesterday,” he said, “I was reading a Facebook comment by a reader who was listing something like his 10 best unrecognized reading experiences, and among them, I was pleased to see, was my 1955 novel ‘This Fortress World.’ It’s that sort of thing, the realization that you may not have a best-seller, but somewhere out there are people who really respond to the kind of language that you put on the page to tell stories with, and I suppose here in my latter years I am still trying to earn my day on Earth by creating something.”

James Gunn will autograph copies of "Star-Begotten" at a launch event  sponsored by the Gunn Center for the Study of Science Fiction from 4 to 5:30 p.m. Friday,  Dec. 1, at the Jayhawk Ink bookstore in the Kansas Union.