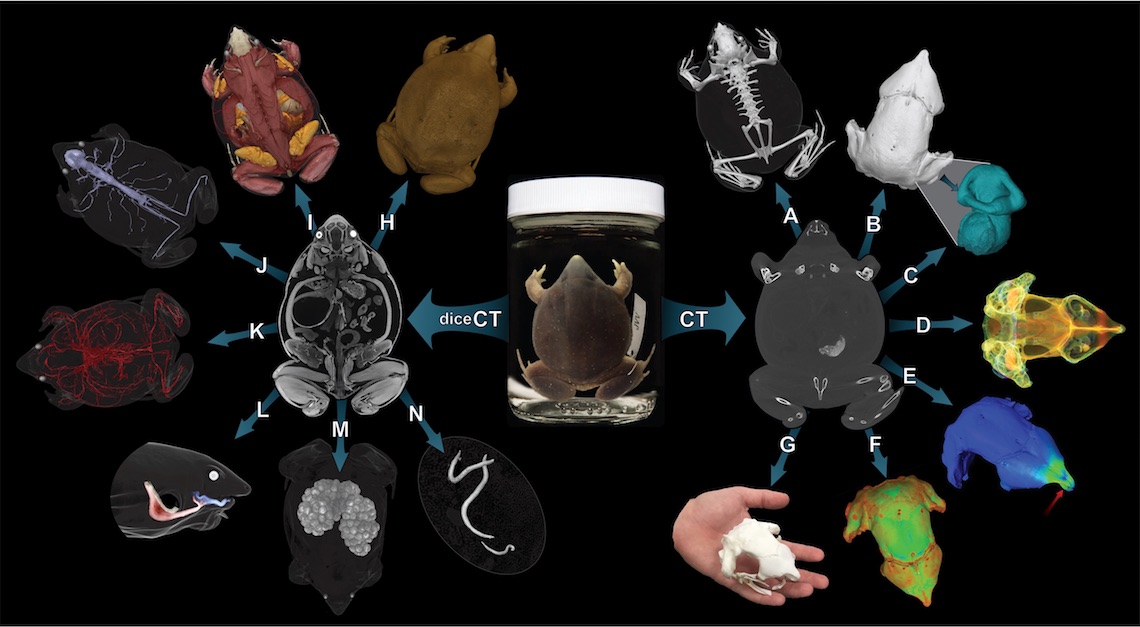 LAWRENCE — A new endeavor among 16 research institutions will create high-resolution, digital three-dimensional images of internal anatomy across a host of vertebrate biodiversity, making the data freely available to researchers and the public. Using the images, educators, scientists and anyone with a 3-D printer will be able to generate highly accurate models for teaching, research or any reason.

The undertaking, part of the oVert project, a Thematic Collections Network funded by the National Science Foundation, aims to scan between 20,000 and 30,000 specimens from across the tree of life for vertebrates (animals that have a backbone).

Species collected and preserved throughout the decades from the University of Kansas Biodiversity Institute and Natural History Museum will be among those scanned and provided publicly.

“CT scanning has been around for quite some time, and different researchers have been investing in CT for smaller individual projects — but the resulting stacked CT scans have never been freely available on this scale before,” said Luke Welton, collection manager in the Herpetology Division of the Biodiversity Institute, who is primary investigator for the KU portion of the grant.

Welton, whose KU collaborators include Richard Glor, A. Townsend Peterson and Robert Moyle, said the scanned CT images would be available at a website called MorphoSource, where they can be viewed, manipulated, studied and provide the raw data for specific research questions.

“You can drag the corners and rotate the 3-D image 360 degrees, or load them into 3-D printer software and 3-D print that entire specimen for public K-12 education or undergraduate research initiatives,” Welton said. “You could model, say, the evolution of horses based on their teeth. Or model something rare, like a monitor lizard such as the little-known Varanus bitatawa or a Sphenodon punctatus, called the Tuatara. People can develop education programs around this physical material — anyone can look in a book but to have that physical thing in front of you opens the door to engage in a way you wouldn’t otherwise be able to.”

Models printed from the data could aid teachers at all levels who ordinarily wouldn’t have access to specimens or other instructional materials.

“This could be the case even at a university,” Welton said. “Having the digital data or a 3-D replica there — it can really be a game changer for students who do better in a hands-on learning environment. Plus, even here at KU, we’d much rather use a 3-D replica than actual specimens in certain settings to avoid wear and tear or have elements falling off.”

As part of the education and outreach effort, the investigators will offer yearly teacher-driven workshops to generate lesson plans based on digital and printed 3-D volumes that will then be available on MorphoSource.

In addition, the work will include contrast-enhanced soft tissue scans for a majority of animal families; support of NSF BRAIN initiative by providing new inroads into research on brain and cranial nerve diversity across vertebrates; facilitate the diagnosis, description and inference of patterns and relationships among extant vertebrates; provide raw material for testing hypotheses of morphological evolution such as disparity, modularity and phenotype-environment interactions; and aid in the development of structure-function models for testing hypotheses about morphological adaptations related to things like feeding and locomotion.

Under the oVert grant, KU will receive $88,000 to enable students to perform the careful work of caring for scanned specimens over the coming years.

“The money coming to KU is to fund graduate and undergraduate curatorial assistants who will facilitate packing up specimens at KU and sending them to scanning institutions, and once material comes back, curating it and putting back into the right place in the collections,” Welton said. “We’ll have one undergraduate for two semesters per year for four years, and two graduate students each summer, every summer for the next four years.”

Welton said work under the grant at KU likely would focus on strengths within its collection of vertebrate specimens.

“During the first year, the researchers across the grant are seeking feedback from the scientific and educational community for what they want — species that will best serve them for outreach and education,” Welton said. “Here at KU, we’re waiting to get our marching orders. Our herpetology collection, as far as academically based collections, is the second largest behind Michigan, and fourth largest in the U.S., and has huge geographic breadth — one of the largest collections from Central and South America in the world and this year will become the largest repository of Philippines material.”

The KU researcher said other collections at the Biodiversity Institute with species expected to undergo scanning include ornithology and ichthyology.

David Blackburn at the University of Florida, primary investigator for the overall grant encompassing all institutions, performed his postdoctoral work at KU.