LAWRENCE — With global warming an ever-present worry, renewable energy – particularly solar power — is a burgeoning field. Now, research in the School of Architecture & Design (Arc/D) has demonstrated methods of optimizing the capture of sunlight in experiments at the Center for Design Research. 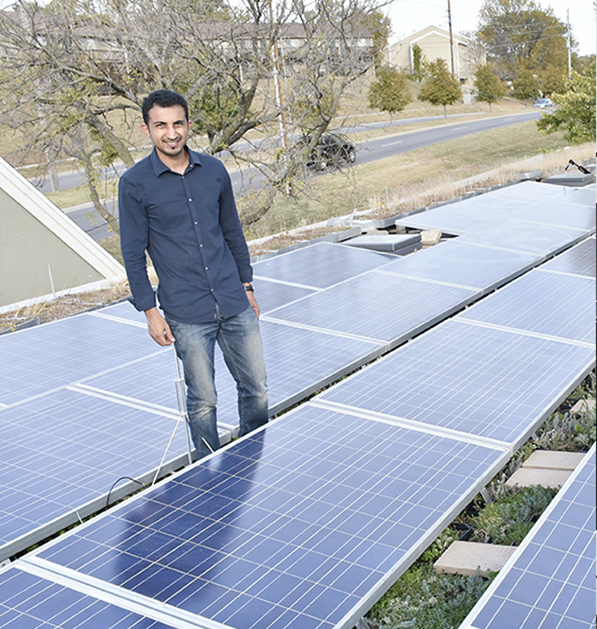 Doctoral student Mohammed Alshayeb started by asking himself what might be done to boost the performance of solar panels.

“The efficiency of a photovoltaic panel is measured under standard testing conditions – at 77 degrees Fahrenheit,” he said. “Every degree that the temperature increases decreases performance.”

Alshayeb wondered if there was a way to “extract the heat out of the panels” when the temperature rises above 77. Because most solar panels are installed on building roofs, Alshayeb decided to compare the effects of three types of roof materials – highly reflective (i.e., white), conventional (black) and vegetated (green) – on the panels’ performance.

The CDR roof is mostly covered with sedum, planted in trays. So Alshayeb established his test bed there, installing a solar panel monitoring system over the green roof, as well as nearby white and black portions. He also installed temperature, humidity and light sensors and a weather station to record conditions like wind speed. The sensors made recordings every five minutes for a year, and Alshayeb then analyzed the data.

What he found was that, contrary to industry practice, which favors white roofs over black, white roofs actually slightly decreased the efficiency of the solar panels due to the heat they reflected up toward the panels. However, compared to the vegetated roof, the high-reflective and conventional roof materials were not significantly different from one another. Panels installed over the green roof performed best, generating an average of 1.4 percent more energy as compared with those over the white and black roofs.

“There is a lot of research in this area, but nothing as comprehensive as he has done,” said Alshayeb’s faculty adviser, Associate Professor of Architecture Jae Chang. “The next step is to see the effect of increasing the height of the panel over the roof.”

Another of Chang’s students wanted to see whether the performance of light shelves could be improved. A traditional light shelf is a fixed, horizontally mounted plane that can be placed either outside, inside or on both sides of a window in order to reflect and redirect sunlight inside a building. Light shelves can thus reduce the use of artificial lighting and electricity.

Traditional, fixed light shelf systems have limited effectiveness, as they are only capable of functioning while the angle of the earth to the sun is just right. Previous experiments have shown that movable light shelves and ones with curved surfaces can diffuse sunlight with greater efficiency than traditional fixed, flat systems. This is where the idea of a Dynamic Thermal-Adaptive Curved Lightshelf (DTACL) came about. What if there were a system that could combine all these methods to enhance the delivery of natural light into buildings throughout the day without the use of mechanical and electrical controls, and unlike existing movable systems?

The project includes computer simulations and a field experiment to collect a year’s worth of data on the performance of the DTACL system through different weather conditions on the KU campus. Four experimental rooms the size of refrigerators fitted with sensors and light shelves were created and placed on the lawn of the CDR. Three of the rooms have fixed light shelves in various configurations, while one, the DTACL, uses an adaptive, composite material called Thermadapt, invented by Ronald P. Barrett and commercialized by a company he runs with his son, KU Professor of Engineering Ron Barrett-Gonzalez. Thermadapt changes shape in response to heat and sunlight, curving upward. When it cools, it flattens back out.

It is theorized that the DTACL system would transfer light inside a building more efficiently than the fixed systems, and initial results have proven that to be the case.

Data is being collected, compared and analyzed. Based on a two-month pilot study and computer simulations, the indoor light intensity of the DTCAL system is twice as great as the intensity of a fixed, traditional light shelf.

Photo: Mohammed Alshayeb in front of the Center for Design Research