LAWRENCE – The Dole Institute of Politics at the University of Kansas has announced its full lineup of programs for the spring 2018 semester. 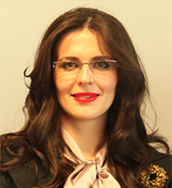 Headlining the program schedule is the 2018 Dole Lecture with Vlora Çitaku, ambassador of the Republic of Kosovo to the United States and the first sitting ambassador to visit the Dole Institute.

Programs will begin in late February with the popular four-part Presidential Lecture Series. In this year’s series, presidential historian Richard Norton Smith will break down presidential rankings and examine how time and history can shape our assessment of a president’s success.

“We are honored to host Ambassador Çitaku at the institute this semester,” said Dole Institute Director Bill Lacy. “Sen. Dole developed a special relationship with the people of Kosovo when he chaired the International Commission on Missing Persons, set up to trace victims of the Bosnia war. The ambassador is one of several excellent events we have lined up this spring, ranging from historical topics to contemporary politics.”

The institute’s Leadership and Globalization in Sports lecture returns in March with a visit from Bob Kendrick, president of the Negro Leagues Baseball Museum in Kansas City. March will also feature Harvard Kennedy School professor Leah Rigueur, who will lay out four decades of history between the Republican Party and African-Americans. Rigueur’s talk is hosted in partnership with the KU Department of African & African American Studies.

In April, KU professor Burdett Loomis will be joined in conversation with author John Lawrence. The pair will discuss the “Watergate Babies” of 1974: a wave of freshman Democratic representatives elected in the wake of the Watergate scandal. Çitaku’s visit will round out the semester’s evening programming in mid-April.

A discussion group series by Dole fellow Jim Jonas will highlight afternoon programming in the spring. The campaign manager for Greg Orman’s 2014 U.S. Senate run in Kansas, Jonas will welcome a series of high-profile guests for an examination of independent candidacies and election reform in 2018 and beyond.

Afternoon programs will also include the beginning of another year of Fort Leavenworth programming. This year’s lectures are titled “Home Fronts and War Fronts,” examining both combatant and noncombatant experiences of war.

All events are free, open to the public and located at the Dole Institute unless otherwise noted.

1 to 45: The Best and the Worst of American Presidents

Presidential historian and former Dole Institute director Richard Norton Smith returns for a deep dive into presidential rankings and what they can teach us. Smith will guide the audience through an examination of the executive office from the exalted to the ignoble, with his participation in the annual C-SPAN Presidential Historians Survey serving as a backdrop. How do time and history shape our viewpoints of a president’s success or failure? A ranking is only the beginning of the story.

Part One: “Ranking the Presidents”

Time, history and context can transform our perception of a president’s leadership — both for better and for worse. After all, presidential ratings are hardly etched in stone. Smith introduces the series by examining the multiple factors that cause ratings to fluctuate like the Kansas weather in April.

Take a look at the faces carved on Mount Rushmore, often considered giants of the American presidency. What can we learn from these, and other, successful chief executives? Smith draws upon various examples, dissecting each for their enduring lessons and relevant qualities.

There is much to be learned about the presidency from both success and failure. Smith selects from a handful of less-than-stellar presidents, from James Buchanan and Franklin Pierce to Warren G. Harding and beyond, exploring what we might learn from their time in office.

Using the lessons learned from the first three installments of the series, Smith will guide the audience through the highs and lows of the last 10 presidencies. Spanning over 66 years of tumultuous history, these leaders presided over critical events that continue to affect our nation today.

The president of the Negro Leagues Baseball Museum, Bob Kendrick arrives to discuss the museum, a Kansas City institution. The NLBM is dedicated to preserving the rich history of African-American baseball in the U.S. Kendrick will share insight into the museum, the storied history of Negro League baseball and his close friendship with Kansas City and Major League Baseball legend Buck O’Neil.

“The Loneliness of the Black Republican”

Harvard Kennedy School professor Leah Rigueur lays out a new understanding of the interaction between African-Americans and the Republican Party, exploring the seemingly incongruous intersection of civil rights and American conservatism. Her book, “The Loneliness of the Black Republican,” delves into four decades of history from the New Deal to Reagan’s ascent in 1980. This program is hosted in partnership with the KU Department of African & African-American Studies and includes a book sale and signing.

“The Class of ’74: Congress after Watergate”

In November 1974, following the historic Watergate scandal, Americans voiced their displeasure with the GOP by electing a wave of 76 Democratic freshmen to the U.S. House of Representatives. Commonly referred to as “Watergate Babies,” some characterized them as idealistic and naïve, while others point to their work championing unprecedented reforms in Washington. Author John Lawrence joins KU Professor Burdett Loomis for a conversation on the complex politics that emerged in the wake of Watergate. This program includes a book sale and signing.

The Dole Institute will host Vlora Çitaku, ambassador of the Republic of Kosovo to the U.S., for the 2018 Dole Lecture. The first sitting ambassador to visit the Dole Institute, Çitaku will discuss her career in international diplomacy and her work on behalf of the young Republic of Kosovo. Once a child refugee during the Kosovo War in 1999, Çitaku has served in the Kosovo General Assembly and as the nation’s deputy foreign minister, acting foreign minister and consul general of the Republic of Kosovo’s mission in New York City.

The United Kingdom’s response to the French threat came at a time of great social and political change at home. From frantic invasion scares in 1803-1805 to political indecision, economic upheaval and civil unrest, British reaction to the threat of the Napoleonic Empire ultimately led to Britain’s impressive dominance in the 19th century. Led by Mark Gerges, this discussion examines how military events influenced the shape of modern Europe.

“America and the Armenian Genocide”

Starting in 1915, the Ottoman Empire killed up to 1.5 million Armenians and evicted hundreds of thousands of others from their homes in an act of genocide that would later inspire Adolf Hitler’s Holocaust in Europe. The Dole Archives Archival Fellow for Armenian Advocacy, author and journalist Michael Bobelian leads an examination of the U.S. 20th-century response to the “forgotten genocide” and highlights Sen. Bob Dole’s leadership as an advocate for Armenia and Armenian-Americans.

“Rise of the Independents: Candidates and Reform in 2018 and Beyond”

In a partisan political environment, independent or unaffiliated voters now represent the largest voting bloc in many U.S. states. Can independent and third party candidacies seize upon this shift in party identification? How could they shape the future of U.S. politics? Dole Fellow Jim Jonas leads a discussion group series examining election reform and independent candidates in Kansas and the nation. Jonas is a political communications consultant with nearly two decades of experience in independent political reform and campaigns. In 2014, Jonas served as the campaign manager for Greg Orman’s independent campaign for U.S. Senate in Kansas.

Emphasizing multiple perspectives from disparate groups, Mark Hull will focus on the lives of everyday Germans during World War II. What they ate, what they saw in their local public spaces, what they read and their understanding and response to the war’s events changed dramatically as the war took an ever-greater personal toll. This talk will describe the increasingly desperate steps taken by the National Socialist state to maintain civil order and morale in the face of looming catastrophe.

Explore the many ways in which the Great War changed the world, from prisoner of war camps in Switzerland, to resistance movements in Belgium, memorial stadiums in the U.S. and a quarantine law in Kansas. A panel of KU faculty, staff and students will share research they conducted for doctoral dissertations and senior honors theses, as well as discuss a First-Year Seminar taught each year of the centenary. This program is hosted in partnership with the KU WWI Commemoration Committee.

Join the institute for a free morning of family fun at the annual Easter Egg Roll with Dole. This event includes a White House-style egg roll race, egg hunt, snacks, crafts, live bunnies and more. The event is on rain or shine, and all children receive a special goody bag when departing the event. Children of all ages are welcome, though egg roll and hunt activities are split up between ages 3-12.

“America's Response to the Holocaust"

The U.S. has a proud tradition of serving as a haven for Europe’s cast offs — yet immediately before and throughout World War II, America shut its doors to refugees fleeing the oppression of the Nazis. No group suffered more from this than Europe’s Jews. David Cotter analyzes the ideological battle between isolationists and internationalists in the U.S. by assessing how President Franklin D. Roosevelt managed competing factions within his administration. The talk will provide an intriguing look at the ambivalence of America’s response to the Holocaust.

“The Great War in East Asia”

Most of the world focused its attention on events in Europe during the First World War, but many changes were brought to the Far East as well. Both China and Korea suffered from Japan’s favorable treatment in the Treaty of Versailles, adding to the ongoing political upheavals in both countries. The U.S., meanwhile, maintained a military role in both China and the Philippines while joining other allied states in operations in Russia. Joseph G.D. Babb explores the events in the Far East during this period that served as harbingers of the dramatic political changes and major conflicts in the coming decades.