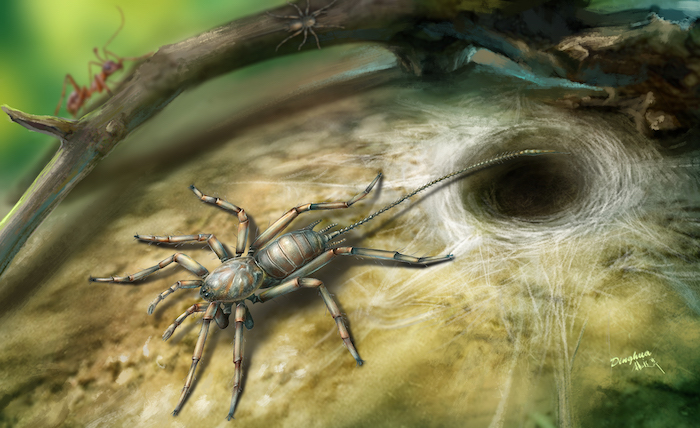 LAWRENCE — An extraordinary new species of arachnid, resembling a spider with a tail, has been discovered in amber from Myanmar (formerly Burma), of mid-Cretaceous age, around 100 million years ago. 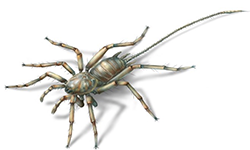 The finding is described in a paper appearing in Nature Ecology & Evolution by an international team including Paul Selden of the Paleontological Institute and Department of Geology at the University of Kansas and colleagues from China, Germany, Virginia and the United Kingdom.

“There’s been a lot of amber being produced from northern Myanmar and its interest stepped up about ten years ago when it was discovered this amber was mid-Cretaceous; therefore, all the insects found in it were much older than first thought,” said Selden. “It’s been coming into China where dealers have been selling to research institutions. These specimens became available last year to Nanjing Institute of Geology and Paleontology.” 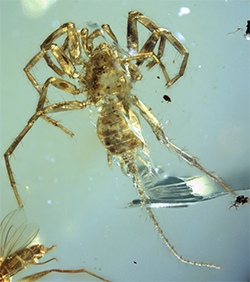 “Any sort of flagelliform appendage tends to be like an antenna,” the KU researcher said. “It’s for sensing the environment. Animals that have a long whippy tail tend to have it for sensory purposes.”

This exciting new find confirms a prediction made a few years ago by Selden and colleagues when they described a similar tailed arachnid, which resembled a spider but lacked spinnerets. These animals, from the much older Devonian (about 380 million years ago) and Permian (about 290 million years ago) periods, formed the basis of a new arachnid order, the Uraraneida, which lies along the line to modern spiders.

“The ones we recognized previously were different in that they had a tail but don’t have the spinnerets,” said Selden. “That’s why the new one is really interesting, apart from the fact that it’s much younger — it seems to be an intermediate form. In our analysis, it comes out sort of in between the older one that hadn’t developed the spinneret and modern spider that has lost the tail.”

The new animal, called Chimerarachne after the Greek mythological Chimera, a hybrid creature composed of the parts of more than one animal, lies one step closer to modern spiders on account of its possession of spinning organs.

Selden said little of the tiny spider’s day-to-day behavior could be determined.

“We can only speculate that, because it was trapped in amber, we assume it was living on or around tree trunks,” he said. “Amber is fossilized resin, so for a spider to have become trapped, it may well have lived under bark or in the moss at the foot of a tree.”

While the tailed spider was capable of producing silk due to its spinnerets, Selden said it was unlikely to have constructed webs to trap bugs like many modern spiders.

“We don’t know if it wove webs,” said the KU researcher. “Spinnerets are used to produce silk but for a whole host of reasons — to wrap eggs, to make burrows, to make sleeping hammocks or just to leave behind trails. If they live in burrows and leave, they leave a trail so they can find their way back. These all evolved before spiders made it up into the air and made insect traps. Spiders went up into the air when the insects went up into the air. I presume that it didn’t make webs that stretched across bushes. However, like all spiders it would have been a carnivore and would have eaten insects, I imagine.”

Selden said the spider’s remote habitat made it possible that tailed descendants may still be alive in Myanmar’s backcountry to this day.

“We know a lot about the Burmese biota during the Cretaceous,” he said. “It was a pretty good tropical rainforest, and there are a great many other arachnids we know were there, particularly spiders, that are very similar to the ones you find today in the southeast Asian rainforest. It makes us wonder if these may still be alive today. We haven’t found them, but some of these forests aren’t that well-studied, and it’s only a tiny creature.”

Top image: The new animal resembles a spider in having fangs, male pedipalps, four walking legs and silk-producing spinnerets at its rear. However, it also bears a long flagellum or tail. No living spider has a tail. Credit: Dinghua Yang

Top right: Illustration of a remarkable arachnid from the mid-Cretaceous (approximately 100 million years ago) Burmese amber of Myanmar, which documents a key transition stage in spider evolution. Credit: Dinghua Yang