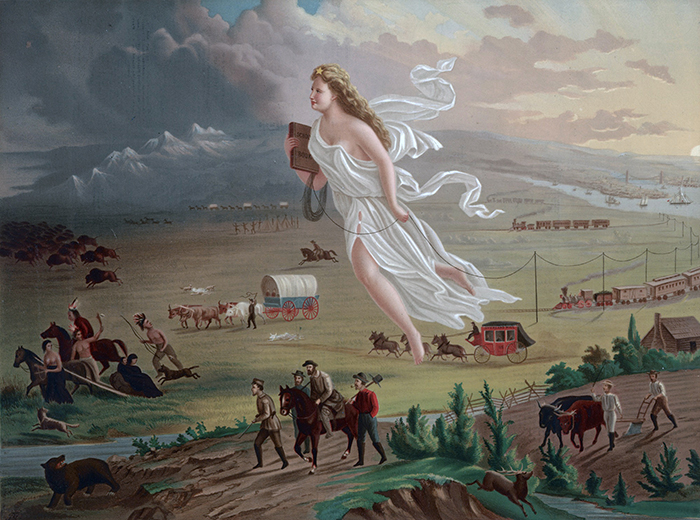 LAWRENCE — What is true grit? A determination to work hard, resilience in the face of a challenge or a famous movie starring John Wayne? It could be any of those things, but in today’s schools, it is increasingly something measured in children as a recipe for how kids should be successful in school and life. Yet grit raises new problems as it solves others in how it categorizes children, reframes the student-teacher relationship and inadvertently explains away socioeconomic inequalities, a University of Kansas professor argues in a newly published article.

Christopher Kirchgasler, assistant professor of curriculum studies, has authored “True Grit? Making a Scientific Object and Pedagogical Tool,” recently published in the American Educational Research Journal. He explores how grit has been seen as a positive trait for more than a century. In the U.S., for instance, grit is described as one of the key aspects in how settlers built a successful nation on an unforgiving frontier.

A major problem of the grit narrative? It erases the history of removal and extermination of Native Americans from their land, explaining resistance to assimilation as an inability to adopt “civilized” qualities. Today, psychologists believe everyone can learn to be gritty.

“Yet, it’s children of color and those from low socioeconomic backgrounds who are usually stereotypically seen as furthest from that ideal,” Kirchgasler said.

A former charter school teacher in East Boston, Kirchgasler has observed how grit has become a shorthand for how teachers evaluate their students’ growth as moral individuals. In the article, he analyzes how tools such as the Character Growth Card encourage students and teachers to continually rate students’ levels of grittiness through observations of specific behaviors. Those deemed to be insufficiently gritty are marked as needing intervention. Grit pedagogies are common today in many urban charter schools, but the uptake of grit can be seen increasingly in public schools across the country.

Grit’s popularity can be linked to psychologists’ work defining it as a combination of one’s passion and perseverance and associating it with long-term success. Grit is given as a “kernel of character” of successful people. Psychologist Angela Duckworth, for example, has spent the past decade extolling the virtues of grit. Her TED talk on grit has been viewed more than 10 million times, and she recently penned the best-selling and widely cited book “Grit: The Power of Passion and Perseverance.” It was around this time that Kirchgasler began noticing how tools to teach and grow grit began appearing in school curricula.

Kirchgasler argues that grit is not only a newly discovered psychological trait of the individual, but it is the retelling of an enduring cultural narrative.

“I’m interested in understanding what this cultural thesis is that gets called grit and just gets assumed when we think about what a child is and should be,” Kirchgasler said. “That narrative of grit and hard work is not bad, but it’s dangerous in what it assumes and doesn’t talk about as it explains success or failure.”

Through the article, Kirchgasler traces how grit has become established in educational and psychological research and how it came to enjoy its wider acceptance today.

“The idea of grit is so deeply woven into our school system that in some ways it’s been there for years and just didn’t have a name,” Kirchgasler said. “What’s different now is that we do have a name for it, and we are developing tools to measure it. At the same time, it evokes a very traditional idea of the child as someone who learns willful self-mastery, which has essentially been the bedrock of U.S. psychology since William James and John Dewey.”

Then and now, Kirchgasler explains, you learn that if you’re not gritty, there’s something wrong with you.

“So, I’m not just trying to put a target on grit as much as I want us to scrutinize the scientific discourse we use to talk about and act on our students in the name of their ‘natural development,’” he said.

Kirchgasler also notes an irony in using grit as an antidote to standardized testing. In an era when students, teachers and schools are judged increasingly by the test scores they produce, focusing on students’ grit appears to offer an alternative by focusing on an individual’s inner potential, or “soft skills.” Yet he found that grit pedagogies have become another way to make comparisons based on numbers.

“Once you quantify grit, you can compare it and create datasets from classes to schools, and beyond that become like a GPS for how you are supposed to view your success and progress as a teacher and as a child,” Kirchgasler said. “There are transnational organizations doing this right now around the world, particularly in Europe and in Africa, that are assuming grit is a universal quality of people irrespective of differences in cultural values and priorities. Quantifying grit is linked to raising test scores, of course, but it’s also about achieving this unquestioned, singular moral ideal of what a child, student or person should be.”

Ultimately, Kirchgasler argues the idea of grit, how it is taught and how it is measured needs to be treated critically, especially as it grows in popularity.

“I think it is essential for students, parents and teachers to be able to ask whether or not this is the right way to think about who we are or should be,” he said. “Our whole society in the U.S. is organized around the narrative of the lone individual who succeeds by sticking with challenges, but of course that’s not the only way to be a person. I am concerned that grit’s explanation for success also becomes an explanation for failures. That can be a very dangerous way to think about social inequalities and how best to address them.”

Image:  "American Progress," an 1873 painting by John Gast, illustrates the idea of American progress in conquering the frontier and is widely viewed as an example of how the concept of grit was instrumental in the settling and establishing of America as a nation.