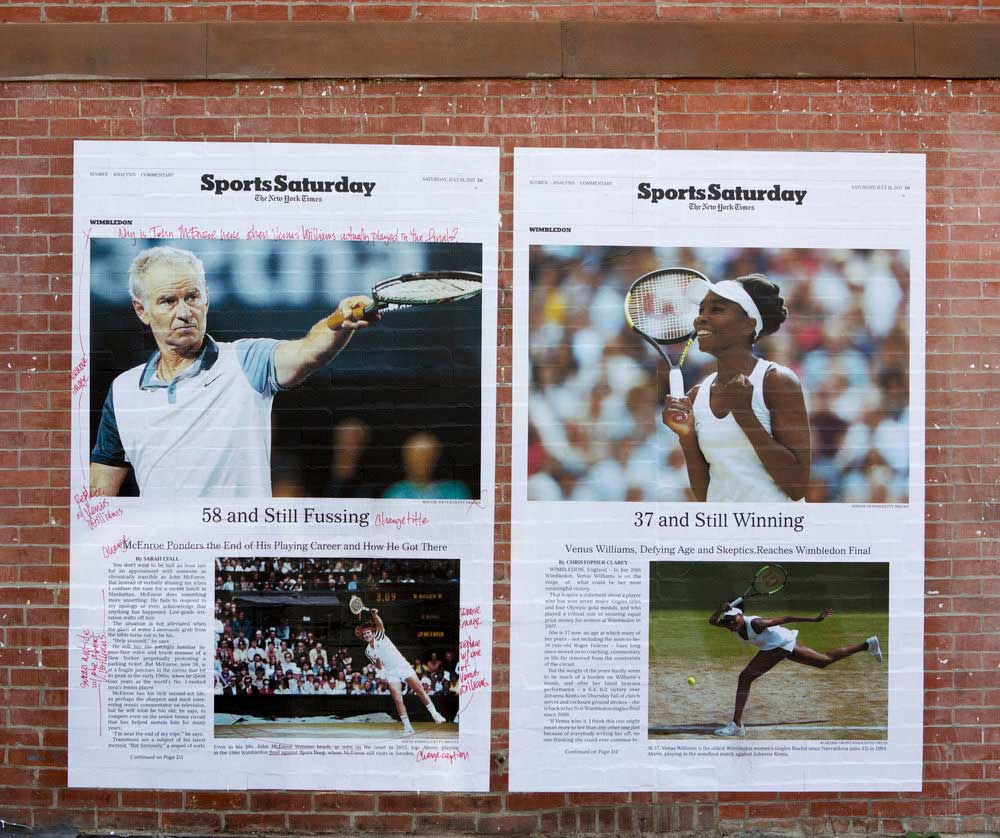 LAWRENCE — Brooklyn-based artist Alexandra Bell will visit the University of Kansas from March 5-7 in conjunction with the current KU Common Book and Common Work of Art. Her visit includes a free public lecture at 5:30 p.m. March 6 in the Spencer Museum of Art Auditorium.

Bell earned her master’s degree in journalism at Columbia University before turning her attention to racial bias found in articles in her regular newspaper, The New York Times. Her “Counternarratives” series involves temporary, large-scale installations of revamped Times articles on the sides of buildings. Her murals have addressed topics including the death of Michael Brown, gender bias in sports reporting and the recent violence in Charlottesville, Virginia. In these works, Bell presents the act of editing and reframing a media narrative as public art.

Howard Graham, associate director of academic programs for the Office of First-Year Experience, said that Claudia Rankine — author of the current KU Common Book, “Citizen: An American Lyric” —mentioned thematic connections between her writing and Bell’s artwork during her visit to campus in September. Bell’s work shares similarities with Rankine’s efforts to interrogate racial bias in the media and honor the victims of racial injustice.

“Bell’s installations connect themes in ‘Citizen’ to topics quite literally ripped from the headlines in the past year,” Graham said.

During her visit, Bell will install examples of her “Counternarratives” on campus and engage with KU students in classes and small groups.

A sample “counternarrative” assignment developed by KU Libraries, the William Allen White School of Journalism & Mass Communications and the Spencer Museum is available on the KU Common Book website for instructors to adapt Bell’s approach to media critique to their own curricular aims.

“Alexandra Bell’s work and artistic practice connect to so many topics currently studied at KU,” said Spencer Museum Curator Kate Meyer. “The broad coalition of partners co-sponsoring Bell’s visit are a testament to the relevance that discussions of race, gender and the media have in our classrooms and beyond.”

Image: Alexandra Bell, “Venus Williams,” 2017. Credit: We Are Not Pilgrims via www.alexandrabell.com.

Search options »
Subscribe to KU Today
KU in the news
Bloomberg — Mon, 01/17/2022
MLK Day to draw divisions as politicians misuse his words
The Los Angeles Times — Mon, 01/17/2022
What did King, a Black clergyman, know about foreign policy? He knew plenty (opinion)
Compared to many other planets, TOI-674 B is relatively easy to study, says @KUPhysicsAstro researcher Yoni Brande… https://t.co/1ab5MMDLMU
«»
Follow us on Twitter »
Why KU
Apply »
One of 34 U.S. public institutions in the prestigious Association of American Universities
44 nationally ranked graduate programs.
—U.S. News & World Report
Top 50 nationwide for size of library collection.
—ALA
5th nationwide for service to veterans —"Best for Vets: Colleges," Military Times