LAWRENCE — Chad Leat, of New York City, retired vice chairman of global banking at Citigroup and University of Kansas graduate, announced a $1 million scholarship gift commitment in support of LGBTQ students at KU during a visit this week to his alma mater. 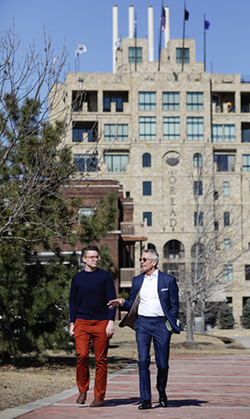 “Being able to provide opportunities to diverse students, and LGBT students in particular, means so much to me,” Leat said. “This gift will establish this scholarship as a much larger and more meaningful investment in the LGBT community here at KU for a long time.”

Leat, 60, a native of Tonganoxie, established the Chad A. Leat Student Scholarship through KU Endowment in 2006. The scholarship aims to assist Kansas students who are committed to helping KU foster a multicultural, inclusive environment. The fund has made a KU education more affordable for more than a dozen students since it was first awarded in 2007. Leat’s new contribution to this scholarship, which he announced at a campus visit Feb. 26, is one of the largest gifts in support of LGBTQ students in the university’s history.

Sam Ritchie, a senior from Minneapolis, Kansas, and the current recipient of the Chad A. Leat Student Scholarship, expressed gratitude not just for the assistance the scholarship provides but the meaning behind it.

“I have received financial aid from other sources in my time here at KU, but this is the first scholarship I’ve received that is actively dedicated to LGBTQ+ identities,” Ritchie said. “There are so many people like me who want an education but have trouble affording it. It’s an honor that KU has someone like Mr. Leat who is actively dedicated to providing scholarships for LGBTQ students.”

In 1978, Leat turned a childhood aspiration into reality, becoming the first member of his family to graduate both from KU and from college, earning a bachelor’s degree in business. Leat’s continued appreciation for his KU education and commitment to his Kansas upbringing has inspired him to give back to the next generation of Jayhawk alums.

As one of the first openly gay major financial leaders on Wall Street, Leat is especially committed to providing financial assistance to those students who are dedicated to making KU a more diverse and inclusive campus.

“I credit my experience at KU with my ability to make my way in the business world and to find a successful and rewarding career in finance,” he said. “When I decided to establish a scholarship to reward not only students with need, but also students that showed leadership and affiliation with the LGBT community on campus, I did it because I had a wonderful career here as a student at KU.”

Leat, former vice chairman of Global Banking at Citigroup, has nearly 30 years of markets and banking experience on Wall Street. He is an acknowledged leader and innovator in corporate credit and mergers and acquisitions finance. He has built and led numerous successful and profitable businesses at Citigroup, JPMorgan Chase and their predecessor companies. He retired from Citigroup in 2013.

Leat currently serves on the boards of Norwegian Cruise Lines, MidCap Financial, J.Crew Operating Corp., TPG Pace Holdings Corp. and TPG Pace Energy Holdings Corp. He is dedicated to many civic and philanthropic organizations: He is a member of the Economic Club of New York and has served on the board of several charitable organizations. Currently he is a trustee of the Parrish Museum of Art. Find out more about Leat’s experience at chadleat.com.

At right: Sam Ritchie, a senior from Minneapolis, Kansas, and current recipient of the Chad A. Leat Student Scholarship, walks on campus with the KU alumnus. Credit: Mike Yoder.