LAWRENCE — Chinese activist and curator of the exhibition “Above Ground: 40 Moments of Transformation” Lu Pin will speak at the Spencer Museum of Art at 5:30 p.m. Thursday, March 29. Lu’s talk will examine the public demonstrations of Young Feminist Activists (YFA) in China that are documented through photographs and narratives in the traveling exhibition currently on view at the Spencer Museum. 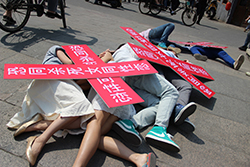 Lu is a former journalist for the state-run “China Women’s News” and founder of the online platform “Feminist Voices.” Her activist work in China spans diverse feminist issues and has gained international support, particularly in the United States. Lu developed “Above Ground” to spread awareness of the actions of Chinese feminists and to build international networks of feminist supporters. The photographs in the exhibition document public performances staged by YFA in China since 2012 that have called attention to gender discrimination and violence against women.

Kris Ercums, curator of global contemporary and Asian art, worked with Lu to bring “Above Ground” to the Spencer Museum.

“I think that this exhibition demonstrates transnational solidarity among women and is especially relevant and powerful during this period of heightened awareness of women’s issues,” Ercums said. “What is particularly powerful about this exhibition is how Young Feminist Activists in China have inspired significant social changes, such as prompting legislation about domestic violence and sexual harassment through their demonstrations and social disruptions.” 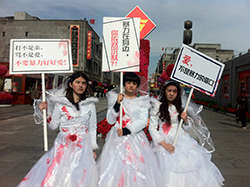 One section of photographs documents public protests sparked by “The Feminist Five,” a group of women activists who were arrested by the Chinese government in March 2015. Lu had worked with the women in China but was in the United States at the time of their arrest. Other sections address domestic violence, LGBTQ rights and safety in women’s public restrooms.

“With great wisdom and courage, the next generation of Chinese feminists is writing new stories of resistance. I am so proud that these young feminists are able to share their art and activism in America at an urgent moment that strengthens bonds across nations,” Lu said.

“Above Ground: 40 Moments of transformation” will remain on view at the Spencer Museum through April 1.

Photographs documenting the “Homophobia Kills Lesbians” protest and the "bride" protest against domestic violence are on view as part of the exhibition “Above Ground: 40 Moments of Transformation.” Images courtesy of Lu Pin.