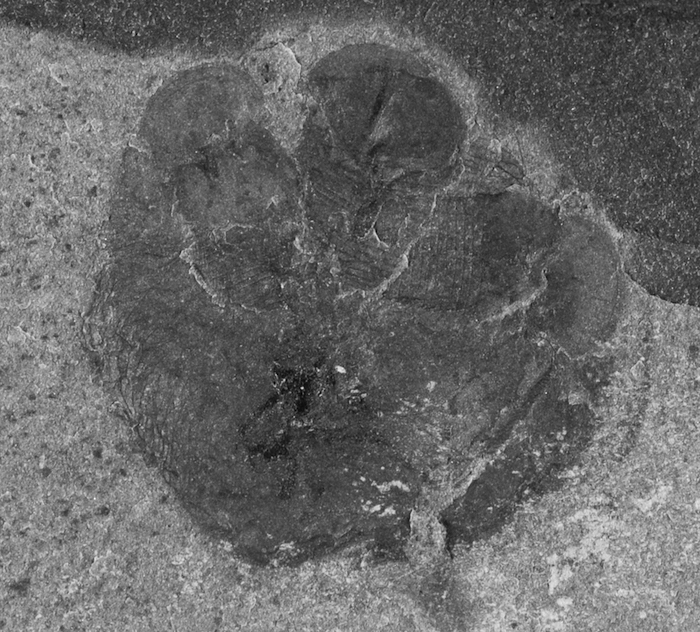 LAWRENCE — In the Mackenzie Mountains of Canada, University of Kansas researcher Julien Kimmig has uncovered details of the Cambrian food web on an ocean floor that once played home to a scattering of bivalved arthropods, hyoliths and trilobites.

The 500-million-year-old poop of a primordial, predatory sea worm tells their story. 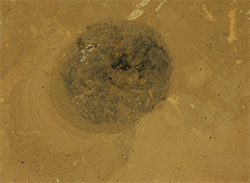 A new paper appearing today in the journal Palaios results from fieldwork Kimmig and co-author Brian Pratt of the University of Saskatchewan performed in a mountain layer of “greenish, thinly laminated, locally burrowed, slightly calcareous mudstone” where they discovered burrows created by a long-lost sea worm.

“These are burrows of a wormlike animal where we have fossilized feces preserved,” said Kimmig, collections manager at the KU Biodiversity Institute and Natural History Museum. “This is rare because feces decompose very easily — it’s not a very stable product from animals. These were preserved because the worms lived in burrows about 4 inches deep. They were hunting out of these burrows. We have something that acted very similar to a modern Bobbitt worm.”

The KU researcher said that the worm that made the burrows in the Mackenzie Mountain sediment may in fact have been an ancestor of modern Bobbitt worms, and it shows the evolutionary strategy of hunting from a burrow at the bottom of the sea has been successful for at least 500 million years. 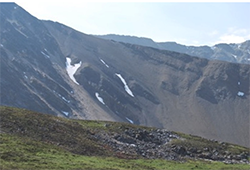 “Bobbitt worms are big worms that live in the ocean today,” Kimmig said. “They prey on fish, live in burrows, have really big predatory appendages, and they hide in the burrow until a fish or other prey comes by — then they grab it, drag it into their burrow and eat it. There are several videos on YouTube about these guys, and it’s fairly terrifying. Unfortunately, we don’t have the worm itself preserved. But this was likely one of the biggest predators in its environment — the animal was likely in the range of 6-12 inches with a diameter of three-quarters of an inch.”

Within the burrows, according to the KU researcher, a tableau of life and death played out that tells the story of the Cambrian food web. Once the predatory worm ate, it seemed to have deposited its feces in the burrow, then abandoned it. Other species entered the burrow to consume what was left behind undigested in the fecal matter, which later became fixed into a coprolite, or fossilized dung.

“A food web is basically the interaction between what is eating what in the ecosystem,” said Kimmig. “When you think of fossils, fossilized poop isn’t what you’re thinking of — but actually it’s one of the most important indicators of paleoenvironmental interactions because it gives us information on what was a predator in the area and what it ate. Because we have shells preserved and pieces of trilobites, we know the animal was a predator and it hunted a variety of animals. Considering this is over 500 million years old, we have an idea of how the ecosystem worked at this time. We see animals developed a variety of feeding strategies. Not only did we have predators, but we have animals who are feeding on its feces and taking advantage of that.”

The research took place in the remote Rockslide Formation of the Mackenzie Mountains near where the Northwest Territories meet the Yukon. Several trips to conduct fieldwork located the sedimentary deposit with preserved fossils — called the Ravens Throat River Lagerstätte — and excavated the fossils. Pratt discovered the layer of sediment in 1983 during his doctoral research.

“We were about two hours from the nearest town by helicopter,” Kimmig said. “We flew out there, had our tent camp built there and had to bring up all our supplies for the four fieldwork trips. In summer, in those mountains you have 24-hour daylight, and we went out there and collected a lot of material. Because we were so remote, we had grizzly bears and caribou out there — we were sleeping with a shotgun loaded with buckshot and slugs. Luckily, we didn’t have to use it — we had a couple of bears, but they were just sitting pretty far away.”

Kimmig said the paper on the Cambrian coprolites shows that key aspects of paleobiology and paleoecology remain poorly understood.

“This tells us animals develop a variety of feeding strategies early on, and they developed them fairly quickly — and we have a lot to learn about the early ecosystems and how they forced animals to adapt. When you have different predators along the open sea bottom, if you’re not careful, you’ll get eaten fairly easily.”

Top image: Several hyolith next to each other feeding on a coprolite.

Bottom right: The outcrop in Canada's Mackenzie Mountains where the researchers found evidence of a 500-million-year-old food web.