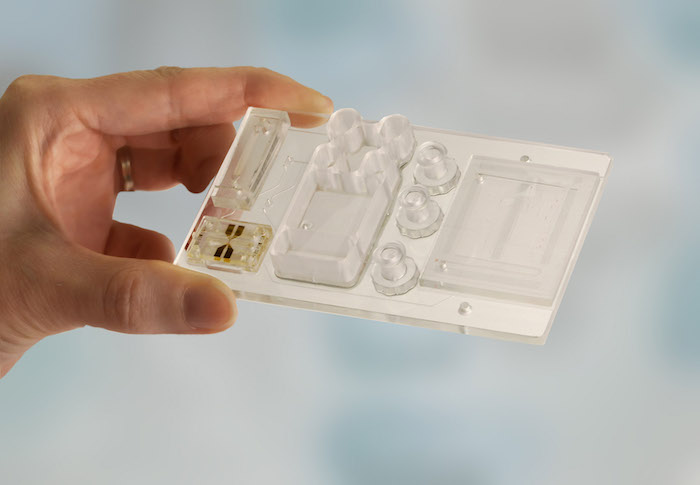 LAWRENCE — The diagnosis and treatment of multiple myeloma, a cancer affecting plasma cells, traditionally forces patients to suffer through a painful bone biopsy. During that procedure, doctors insert a bone-biopsy needle through an incision to get a bone marrow sample — or make a larger incision and remove a section of bone via surgery. 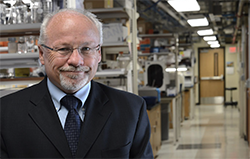 But the days of using bone biopsies to guide treatment for multiple myeloma and other cancers, such as many types of leukemia, may be numbered.

A new University of Kansas research effort featured in the current edition of Integrative Biology has resulted in a low-cost, reliable blood test that uses a small plastic chip about the size of a credit card that can deliver the same diagnostic information as a bone biopsy — but using a simple blood draw instead.

“For the last 10 years, we’ve been developing a blood-based test for a variety of cancer diseases — one of them is multiple myeloma,” said Steven Soper, Foundation Distinguished Professor of Chemistry and Mechanical Engineering at KU and a member of The University of Kansas Cancer Center, who led the research. “We’ll be able to eliminate the need for bone-marrow biopsies and allow the clinician to determine the best way to treat the disease using a blood draw. From this test, the clinician will be able to determine the stage of the disease, what type of drug will best treat the disease and monitor for signs of recurrence if the disease goes into remission.”

Soper, who also serves as director of the Center of BioModular Multi-scale System for Precision Medicine at KU and KU Medical Center, said that previous plastic chips to test for multiple myeloma had shortcomings, such as picking up regular blood cells instead of multiple myeloma cells in the blood. By contrast, the new chip developed at KU vastly improves testing performance and accuracy over previous chips for multiple myeloma.

High levels of circulating multiple myeloma cells are linked with more aggressive disease and worse outcomes, so a sensitive test is vital for assessing the state of the disease in a patient and devising the most effective therapy.

“We get very few blood cells,” Soper said. “Only multiple myeloma cells. So, the ability for us to efficiently detect those cells is very high and thus, diagnose the disease at a more treatable stage.”

Moreover, other attempts to create chips that test for multiple myeloma have proven to be complicated and expensive to manufacture.

“The chip we’re using, because it is made from a plastic, can be injection molded, the same method that is used to produce CDs, DVDs and Blu-ray Discs,” Soper said. “What’s really nice is we can produce these chips for a couple of dollars per chip, which makes it really appropriate for testing in a clinical setting.”

Soper’s co-authors on the paper are Joyce Kamande, Maria Lindell and Peter Voorhees of the University of North Carolina at Chapel Hill and Małgorzata Witek of KU.

The new test for multiple myeloma developed by the team will be brought to market by BioFluidica, a San Diego-based company with a research lab in Lawrence and a clinical testing lab planned for the KU Medical Center very soon.

“BioFluidica has been around for about two years now and is making excellent progress in bringing this chip-based technology to market,” Soper said. “Patients will soon be benefiting from this technology. We’re already doing clinical testing on different diseases using this technology at Children’s Mercy Hospital in Kansas City on pediatric patients with acute leukemia. It’s the same premise — we are looking for tumor cells in blood to see signs of disease recurrence, negating the need for a bone biopsy.”

Indeed, the KU researcher said the new technology developed by his team could have applications across many cancers, making diagnostics easier for patients and clinicians, and helping usher in more tailored therapies that could improve patient outcomes.

“We’ve demonstrated the utility of this technology in a variety of cancer diseases,” Soper said. “Here, we’re homing in on multiple myeloma, but we’ve developed tests for two forms of leukemia and for pancreatic cancer, prostate cancer, ovarian cancer, colorectal cancer and breast cancer. With our technology, we’ll be able to see if patients are developing cancers before they have overt symptoms and help improve survival.”

Soper noted the technology could be ideal for patients living far from major medical facilities, such as those living in rural regions.

“Some of this technology can be really important to areas that don’t have high-end cancer screening tools and thus must travel to a major cancer center to be treated,” he said. “For instance, this test can be conducted in a doctor’s office in a place like Hays, Kansas.”

For Soper, the work on the microfluidic technology goes beyond academic or entrepreneurial interests — like so many Americans, his life has been touched by cancer.

“This is very important to me,” he said. “Just like a lot of people, I’ve experienced a family member dying of cancer. My dad passed away from colon cancer, and he never had a colonoscopy. A lot of the technology we’re developing can minimize the need for these invasive screening technologies like colonoscopies and bone biopsies. This is important for screening but also to assist doctors to provide the correct medication to patients and monitor for recurrence.”

The researcher envisions a day where screening for a broad array of cancers would be routine and widespread, long before symptoms present themselves in patients.

“At some point, you’ll just go in for your yearly physical where they’ll do a blood draw anyway,” he said. “But then they’ll screen it for cancer.”

The National Institutes of Health, the Carlson Family Foundation, the UNC Lineberger Comprehensive Cancer Center and the KU Cancer Center supported this work.

Top image: A new University of Kansas research effort featured in the current edition of Integrative Biology has resulted in a low-cost, reliable blood test that uses a small plastic chip about the size of a credit card that can deliver the same diagnostic information as a bone biopsy — but using a simple blood draw instead. Credit: University of Kansas.

KU in the news
The Washington Post — Mon, 02/03/2020
Vladimir Putin follows a long Russian tradition of enlightened autocrats
National Public Radio — Sun, 02/02/2020
Making Super Bowl guacamole? Be careful to avoid the pits of an avocado hand injury
A @KUHistoryDept professor documented his quest to consume as much funazushi as possible. 🍣🥢 #KUdiscoveries https://t.co/qbez25f8Pa
«»
Follow us on Twitter »