LAWRENCE — The University of Kansas Spencer Museum of Art has received an award of $7,000 from Humanities Kansas and a $4,000 Community Arts Grant from the Lawrence Cultural Arts Commission to support an exhibition of Haitian art opening in September 2018. 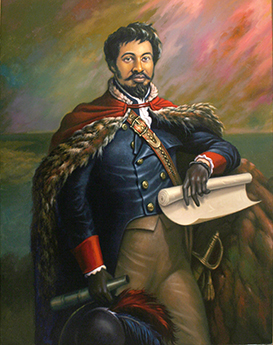 “The Ties that Bind: Haiti, the United States, and the Art of Ulrick Jean-Pierre in Comparative Perspective” will explore the deep historical connections between Haiti and the United States through the lens of 20th-century Haitian art. The exhibition will feature paintings by Haitian-born, New Orleans-based painter Ulrick Jean-Pierre that portray striking historic figures and narrate influential events in a monumental scale. Jean-Pierre’s paintings will be juxtaposed with highlights from the Spencer Museum’s collection of influential 20th-century Haitian art.

“Humanities Kansas supports projects that challenge us to consider our place in the world,” said Julie Mulvihill, Humanities Kansas executive director. “This project uses art to spark a dialogue about the historical connections between Haiti and the United States.”

In addition to supporting the exhibition, these awards will allow the Spencer Museum to host a public event with Jean-Pierre, as well as other educational community programming for all ages.

“‘The Ties That Bind’ marks the first time in over a decade that a significant display of Haitian paintings has taken place in Kansas,” said Spencer Director Saralyn Reece Hardy. “We are looking forward to sharing the stories embodied in these works of art with audiences in Lawrence and across the state.”

The exhibition is organized by Spencer Curator of Global Indigenous Art Cassandra Mesick Braun and Director of KU’s Institute of Haitian Studies Cécile Accilien. Accilien served as a faculty fellow for the museum’s Integrated Arts Research Initiative during the fall 2017 semester.

Image: This portrait of Jean-Baptiste Point du Sable is one of several paintings by Ulrick Jean-Pierre that will go on view in an upcoming exhibition of Haitian art at the Spencer Museum. Image courtesy of Ulrick Jean-Pierre.