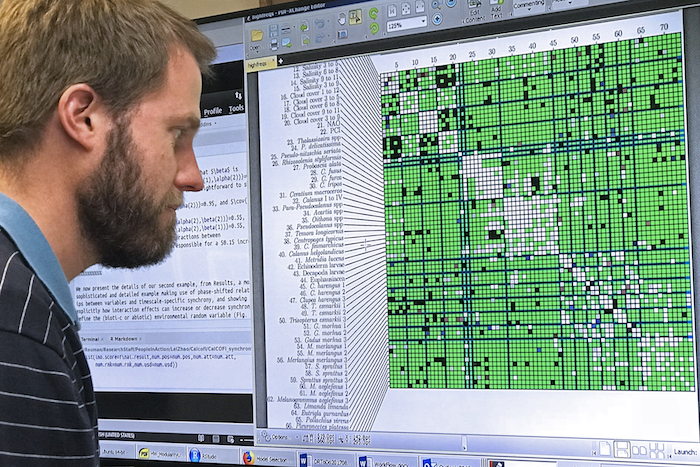 LAWRENCE — A recent $426,609, three-year grant from the National Science Foundation will enable a new investigation of how populations in different places react to changes in environmental factors (like temperature, rainfall) over time and space, which researchers dub “synchrony.” Spatial synchrony of population dynamics can be seen in organisms as diverse as mammals and single-cell organisms, at distances up to thousands of miles, and relates to resource shortages and pest outbreaks. 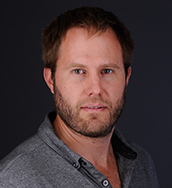 “Synchrony is when multiple populations in different places all fluctuate in the same way,” said Daniel Reuman, professor of ecology & evolutionary biology at the University of Kansas and senior scientist with the Kansas Biological Survey. “One of the causes of population synchrony is synchrony of environmental variables — like the amount of rainfall. When rainfall in different areas is correlated through time, like a drought that’s spread across a large area, that will affect all populations across that area in similar ways.”

Reuman said environmental factors that impact one species across a large area could alter an entire food web, synchronizing that species’ prey, predators and competitors across the area.

“If you have changes in climatic synchrony affecting population synchrony of one species, and that species interacts with others, the effect might cascade through the food web,” he said. “There also is theoretical evidence that changes in synchrony can influence extinction risks.”

In part, the KU researcher’s new work will focus on analyzing “hierarchical dynamical systems” in ecology and how they respond to fluctuating variables.

“If you think of a predator and the prey of that predator, that’s basically a simple version of what we call a hierarchical dynamic system,” Reuman said. “Let’s say the prey is something small that doesn’t move very far and the predator is bigger and can move long distances. That predator isn’t necessarily going to care if there’s few prey right here — it can just go somewhere else. But if prey are scarce in all locations across the state – that’s synchrony — that predator is going to have trouble. It can’t travel far enough.”

Reuman’s investigation could help inform fisheries management, conservation and agriculture. He explained the importance of spatial synchrony using the example of outbreaks and shortages that could impact Kansas crops.

“Let’s say, hypothetically, there are aphids, a crop pest, on farms all across Kansas — and during some years on any given farm there might be a lot of aphids, and other years not a lot,” he said. “Crop-future markets probably don’t care whether a particular farm has a lot of aphids as long as there are enough other farms not blighted by aphids that year. But if you have aphids across all farms, crop futures could be affected.”

“It’s the spatial coordination of events that makes a difference for a larger system.”

Reuman’s work on synchrony combines biology and mathematics to develop mathematical models that shed light on species populations. Using this methodology, the research could predict factors that increase the risks of extinction for a species.

“You have to know the math and do the technical aspect, and you have to know the ecology to know what the important phenomena are,” he said. “The best models have what you want to study in them, and they abstract away the unimportant things. Figuring out which is which is the art of it.”

“We use data sets from large monitoring efforts or satellite data,” he said. “It’s way more data than one person could collect alone. We’ve used 35-year data sets from a network of suction traps that capture aphids in the United Kingdom. We’ve used data on plankton collected using devices towed behind ships. We apply statistics — some of which we develop ourselves and some of which exists already. If we went out to gather data the best we could do is add a tiny amount to the mountain of data you need to do this work, and that already exist.”

The new NSF grant funds full-time work for a postdoctoral researcher, Shyamolina Ghosh. Reuman said he’s searching for an undergraduate student with quantitative and biological interests to participate in the research. He said results from the new research will appear in papers published in scholarly journals over the coming several years.

Photo: Daniel Reuman investigates how populations in different places react to changes in environmental factors (such as temperature and rainfall) over time and space, which researchers dub “synchrony.” Credit: University of Kansas.