LAWRENCE — The 2018 Rocket Grants have awarded a total of $60,000 for 11 artist projects in the Lawrence and Kansas City area. Rocket Grants, a partnership of Charlotte Street Foundation and the Spencer Museum of Art at the University of Kansas, support innovative, artist-driven projects outside of established arts venues. 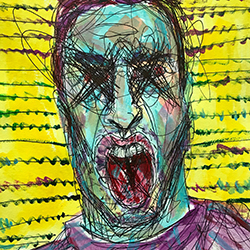 “This year’s Rocket Grants submissions reveal the significance, diversity and passion of artists and artwork in this region,” said Saralyn Reece Hardy, Spencer Museum director. “Every year the Spencer Museum is honored to help facilitate this project that emphasizes the crucial role of art in public dialogue.”

The 2018 awards include nine Project Awards, which receive up to $6,000, and two Research & Development Awards, which receive $2,000 upfront and $4,000 contingent on an implementation proposal. Since the program began in 2010, it has awarded $452,000 to 92 projects. Funding for Rocket Grants is provided by the Andy Warhol Foundation for the Visual Arts.

A public awards ceremony for this year’s recipients will take place at 5:30 p.m. June 7 at Travois in Kansas City. Recipients will each give three-minute presentations about their projects. For more information on this year’s Rocket Grants recipients, visit rocketgrants.org.

A chaotic, multivalent intersection of reality TV and propaganda pageantry.

A mental and physical space for veterans to explore their emotions, histories and stories through a creative healing process and exhibition.

Three members of the Ioway Tribe will bring local and tribal communities together to memorialize the rich history of the area.

A social music movement that uses solar and battery-power energy and integrates the audience into performances.

A one-time, multiday day event honoring trans and queer influences in fashion, music and the media.

A classic hip-hop jam with deejays, graffiti writers and the live creation of art on canvas using breakdance moves.

A mobile platform for open visual, literary or culinary creation.

An evolving, traveling exhibit documenting the immigrant experience of three K.C. Latinx neighborhoods and their ties to the borderlands of today.

Image courtesy of John Sebelius, who received a 2018 Rocket Grant for his project helping veterans explore their emotions and stories through art.