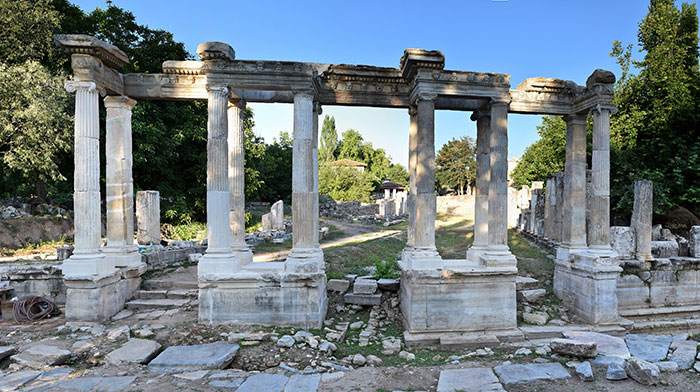 LAWRENCE — As a University of Kansas professor has spent two years trying to recreate an ancient Roman structure in western Turkey, he has enlisted the help of a very modern technological tool — a 3-D printer. 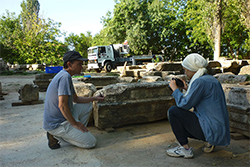 Phil Stinson, associate professor of classics, has been piecing together 3-D-printed models of marble stones. He was trying to figure out exactly how they fit together when the propylon — which means "gate" in ancient Greek — was built in the 20s A.D. as an entrance and exit for the temple complex at Aphrodisias in western Asia Minor, or modern Turkey. The temple complex was named the Sebasteion, which means "temple to the Roman emperors."

Instead of the real massive marble blocks, Stinson is able to fiddle with plastic pieces only inches in size but containing the exact detail of nooks and crannies of the actual stone blocks due to the use of his Creality CR-105 3D printer, housed in the classics department in Wescoe Hall. The Agisoft Photoscan Pro software has guided the printer by examining several photographs of the blocks from all angles to create an accurate 3-D model of them. 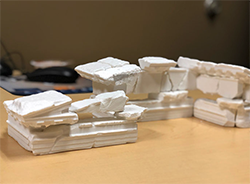 "Doing this is certainly going to save me time at the site this summer, especially from manipulating the blocks around with a crane," Stinson said. "I am also not sure how much we can use the crane because the concrete platform we have would have trouble supporting all this weight."

To overcome these challenges initially of limited access to the site in Turkey and logistical challenges and cost of manipulating the real marble blocks, he enlisted the help of Yasmeen El-Jayyousi, KU graduate student in architecture, to help with the photogrammetry and printing process that included collecting data and images at the site via hand-held cameras and drones and then printing them back in Lawrence. 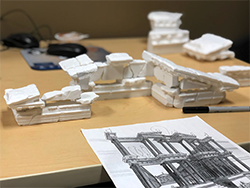 "It was like doing architecture backward," El-Jayyousi said. "Instead of creating or designing something, we were using whatever clues we had to try and understand how people may have originally designed or assembled the structure and using that to piece the physical structure and its history back together."

Stinson’s propylon project is part of a larger excavation of the Aphrodisias site and is a collaboration among the Republic of Turkey's Ministry of Culture and Tourism, New York University and the University of Oxford in the United Kingdom. It is the fourth year of the privately funded five-year project.

The ancient town of Aphrodisias likely had a population of 10,000, but it is known for its metropolitan architectural design, monuments and marble sculpture.

For the propylon that Stinson is looking to recreate and studying, the gate led to a grandiose temple complex that was dedicated to the goddess Aphrodite and the Julio-Claudian emperors of the early to mid-first century A.D.

"The architecture of the building survives at a higher level of preservation than the statues that were displayed on it," he said. "The statues seem to have been removed from the structure in the early Christian period, and the structure itself stayed in place much longer."

Before that, the temple was originally constructed after the death of Rome's first emperor Augustus in 14 A.D.

"The town Aphrodisias had a special relationship with Augustus and Julius Caesar before him," Stinson said. "They really liked this place because of their temple to Aphrodite."

Caesar's family had claimed divine connections to Aphrodite. During the Roman period, Aphrodisias became an urban center after Rome gave it certain privileges, such as tax breaks and more resources to spend on beautifying the city, he said.

The city's residents likely built the Sebasteion temple complex during a period of uncertainty after the death of Augustus, when they wondered if his successor Tiberius would renew their privileges.

"This gate structure I am working on was nothing short of a gallery of statues of the imperial family at that time," Stinson said.

At this stage, Stinson and his colleagues and students are still trying to determine how the gate's architecture fit together with makeshift metal clamps the original builders used. Stinson from his office in Lawrence has been manipulating the small 3-D-printed pieces like a puzzle to see what might work, and the process will give him a head start when he returns to the site in Turkey in July.

"This is allowing us to visualize the original structure in a way that we wouldn't even be able to physically," Stinson said.

The availability of the 3-D printer and software to use photogrammetry process to recreate ancient sites can be a game-changer in researching ancient structures and history, Stinson said.

"What archaeologists are doing is using basically the same technology that Hollywood uses for character modeling," he said. "But we're using it to model artifacts, and in this case architecture."

Top photo: Phil Stinson, associate professor of classics, is trying to recreate the upper story of this ancient Roman structure in western Turkey known as the propylon — meaning "gate" in ancient Greek. The propylon was built in the 20s A.D. as an entrance and exit for the temple complex known as the Sebasteion at Aphrodisias. Courtesy: Phil Stinson

Second photo: Phil Stinson, associate professor of classics, and Yasmeen El-Jayyousi, KU graduate student in architecture, work at the propylon site in Turkey in July of 2017. El-Jayyousi has helped Stinson with the photogrammetry and 3-D printing process to try to recreate the ancient structure. Courtesy: Phil Stinson

Third and fourth photos: Using a 3-D printer, Phil Stinson is working with 1:20 scale models of marble stones in his Wescoe Hall office. The modeling process will save time and cost of physically moving the marble blocks at the site this summer. Credit: KU News Service