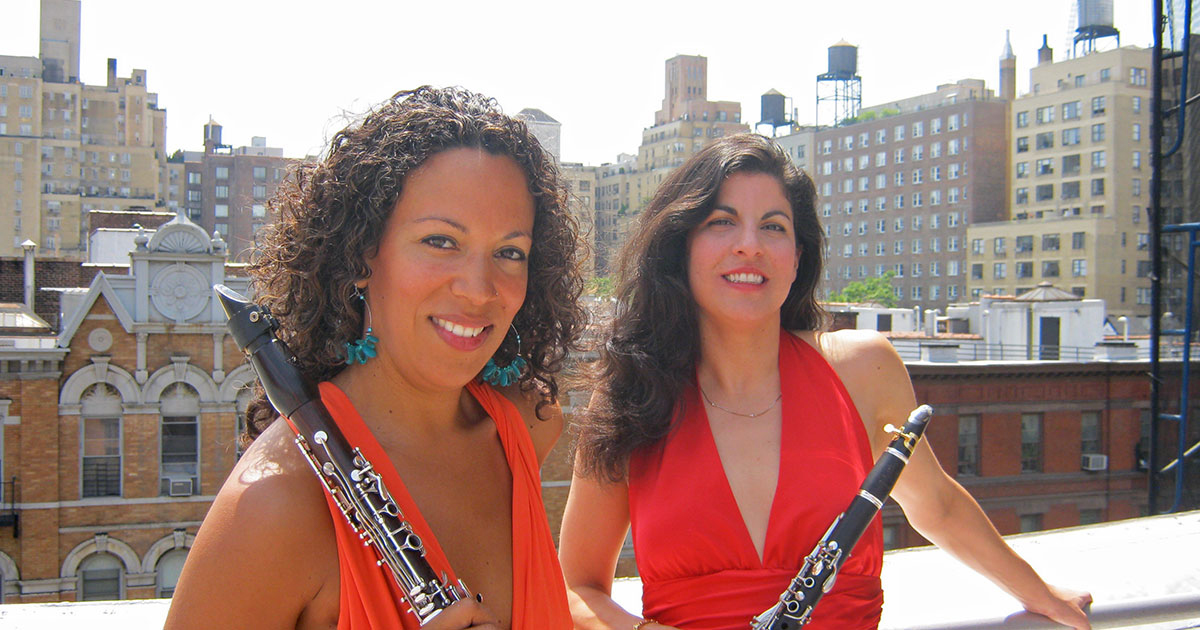 LAWRENCE – After 11 years of teaching at the University of Kansas, during which time she has performed regularly in Colorado as a principal clarinet of the Boulder Philharmonic (and, until a few seasons ago, the Central City Opera), Stephanie Zelnick has embarked upon a new phase of her career.

“My big passion right now has shifted to recording,” said Zelnick, associate professor of clarinet in the University of Kansas School of Music.

In addition to playing in orchestras and recording solo works (she has made two solo albums, is a Naxos and Innova label recording artist and has recorded multiple tracks for compilations), Zelnick has added a new color to her palette – that of a clarinet duo. Her nine-year-old performing collaboration with former Imani Winds ensemble member Mariam Adam, the AdZel Duo, has just released its first, self-titled album, available at adzelduo.com.

“I want to record some standards that I might have a slightly different twist on,” Zelnick said. “But there are a lot of good clarinetists out there. Somebody has recorded every standard really well. So I am trying to find pieces that haven’t been recorded that much, that haven’t been championed or that are by new composers. Pieces that I think are really valid — by people who have really great voices — I try to record those pieces and perform them a lot.”

Zelnick and Adam met in 1995 while attending the Aspen Music Festival.

Since forming their group, Zelnick said, “We work to find composers who, first of all, would write for a pretty restricted medium. It’s two clarinets. So we came up with these composers who had a vision for what our personalities were like, what our lives have been like. These different composers on the album did the same thing.”

The album contains one piece written by Jason Barabba, two by Anne Guzzo and a four-part composition by Mohammed Fairouz. There are also six tracks written during the 19th century by Bernhard Henrik Crusell.

“Crusell, he’s an oldie but a goodie,” Zelnick said. “But the new ones, these are three really unique and innovative composers. It’s a cool, timbral possibility that hasn’t been done that much before — just two clarinets without piano, and they have come up with some great stuff.”

The album was recorded at Oktaven Studios in New York City, and the jacket features original artwork by Lawrence designer David Gnojek, with whom Zelnick has worked on her other two albums.

Zelnick said she is also working with composers and fellow School of Music professors Ingrid Stolzel and Forrest Pierce on new works.

“We are definitely open to what the guys have to say, but since we are a female duo, why not put that all together?” Zelnick said.

Zelnick said she already has another recording in the can “with string players from the Kansas City Symphony of under-recorded works for clarinet and string quartet.”

In addition, she has been working on a book tentatively titled “The High-Altitude Clarinetist” that will deal with the challenges of playing a wind instrument at a mile or more above sea level, as in Colorado, where she has performed as a principal clarinetist in orchestras for the last 20 years. The methods for overcoming that challenge can benefit every player, she said.

In all her endeavors, Zelnick said, “My main goal as a performer is to model to my students what they can do at some point. There is the standard stuff like taking orchestra auditions. But how are you going to teach a private studio? How are you going to invent yourself as a musician? You can make chamber music recordings, be a soloist with an orchestra, do solo recitals. There’s a diverse way to make a living as a musician. It’s important so I have a clean conscience and can sleep at night, knowing that my students are going to be able to have careers. It’s a sacred duty when you take someone on as a music major.”