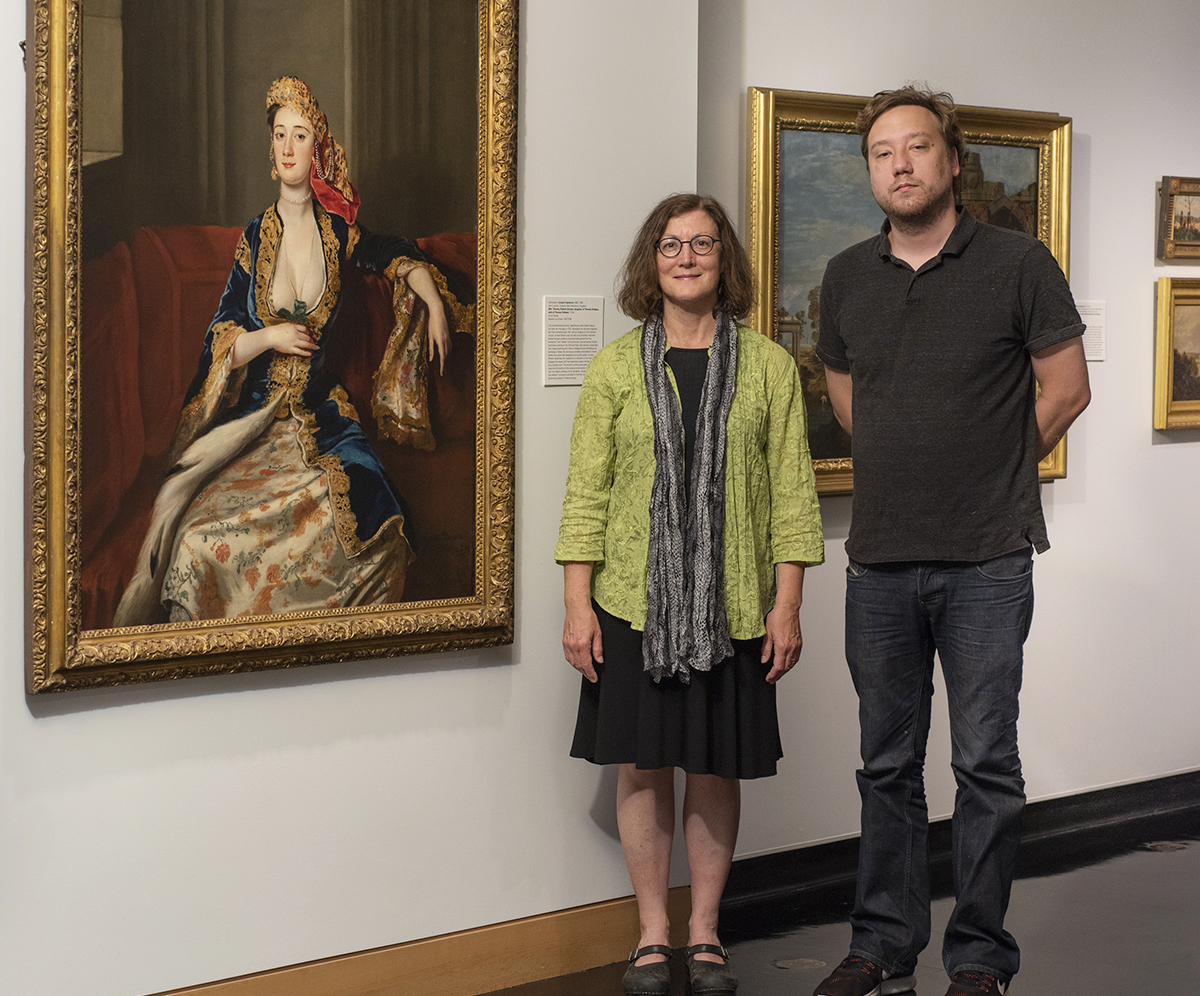 LAWRENCE – With the subject’s knowing gaze, low-cut gown and the jewel-like colors of her embroidered Turkish clothing, the nearly life-size portrait of “Mrs. Thomas Pelham” has been one of the stars of the Spencer Museum of Art’s collection since it was acquired in 1950.

But the museum curators were never sure who painted it – until now.

After years of research, they have reattributed the British 1720s-era painting from Joseph Highmore to John Vanderbank.

This is actually the second reattribution of the painting since 1950. Prior to the 1980s, the painting’s attribution was changed from William Hoare to Joseph Highmore.

“We knew the prior names associated with the maker were not quite right,” said Susan Earle, curator of European and American art. Earle is also a courtesy assistant professor in the Kress Foundation Department of Art History and an affiliate faculty member in the Department of Women, Gender & Sexuality Studies. “We’ve been working on it for years.”

That process came to a conclusion a few weeks ago when Earle and her curatorial colleague Tyler York wrote a proposal to reattribute the painting to Vanderbank and to create a new object label for the wall beside it. York is a doctoral student in the history of art and was the Spencer’s Andrew W. Mellon Foundation/Loo Family Intern for European and American Art this past school year.

Earle explained that John Maxon, then-director of the KU Museum of Art, as it was known at the time, bought the painting from a New York gallery in 1950. At that time, it was attributed to Hoare. The Highmore attribution, too, was eventually debunked, for example by a visiting curator from Kansas City’s Nelson-Atkins Museum of Art.

“We have been investigating who would be a more reasonable artist and trying to do it without making a trip to England to look at a lot of portraits,” Earle said.

“You do research on many different levels. You look at objects, books and biographical information, trying to connect the dots to artists who were working at this time who might have been in the orbit of the Pelham family.

“That was how we ruled out Joseph Highmore. He was a prominent portraitist, but a tiny bit later; it had to be someone a little earlier.”

Here’s where digital scholarship came into play, as York and one of his predecessors, Chassica Kirchhoff, were able to consult now-digitized records held in British archives to better pin down Annetta Pelham’s and John Vanderbank’s lifetime and residence in England.

“She died a few years after she was married,” York said, “so we have the time frame when it could have been painted. John Vanderbank was not very good with his money, and he had to flee England as a debtor in 1729.

“The artists previously considered, Highmore and Hoare, didn’t come into vogue as eminent portrait artists in England until after this point, whereas Vanderbank in the 1720s, if he was not the foremost was one of the premier portrait artists in England. He painted portraits for royalty. He made Sir Isaac Newton’s portrait. A family as high-class as Thomas and Annetta Pelham would not have sought out a copyist.”

Knowing that previous researchers had suggested Vanderbank as the possible artist, York nailed down Vanderbank’s family connection to the Pelhams.

“It turns out that John Vanderbank’s father, John Vanderbank the elder, was the head of the most prestigious tapestry workshop in England called The Great Wardrobe. It supplied the royal family with tapestries, and he was known for tapestries depicting exotic themes, including Middle Eastern subjects.

“Thomas Pelham, Annetta’s husband, was a textile merchant — a very prosperous and prestigious one — and he would have likely had business connections with John Vanderbank the elder.

And there’s this “little tidbit” connecting the families, York said: “John Vanderbank’s brother named one of his sons Moses Pelham Vanderbank, so there are all sorts of little connective tissue that led us to this.”

Lastly, and perhaps most importantly, “Mrs. Thomas Pelham” matches Vanderbank’s style, York and Earle said. Annetta Pelham was born in Constantinople, represented in the portrait by her Middle Eastern clothing. In his proposal for reattribution, York writes that Vanderbank’s portrait of “John Dodd, of Swallowfield, Berkshire” has a similar focus on the subject in the foreground and way of depicting his embroidered clothing against a sketchy background.

Earle said “Mrs. Thomas Pelham” anchors the Spencer’s long-term exhibition titled “The Empire of Things” and organized around the concept of the global circulation of art.

“The focus of this is to ask, ‘How do objects end up museums? How do they circulate around the world? How do they end up in Lawrence, Kansas, at this museum?' This work represents some of those ideas,” Earle said.

Earle and York say Mrs. Pelham’s posture, with her knees spread apart beneath her dress, was highly unusual for the 1720s.

“She’s smiling, her eyes are not looking directly at us, but it’s definitely a low-cut dress,” Earle said. “The combination of the low-cut dress and her body facing directly to us with her legs posed as they are, you just don’t see that, and that’s partly why this is a really special work.”