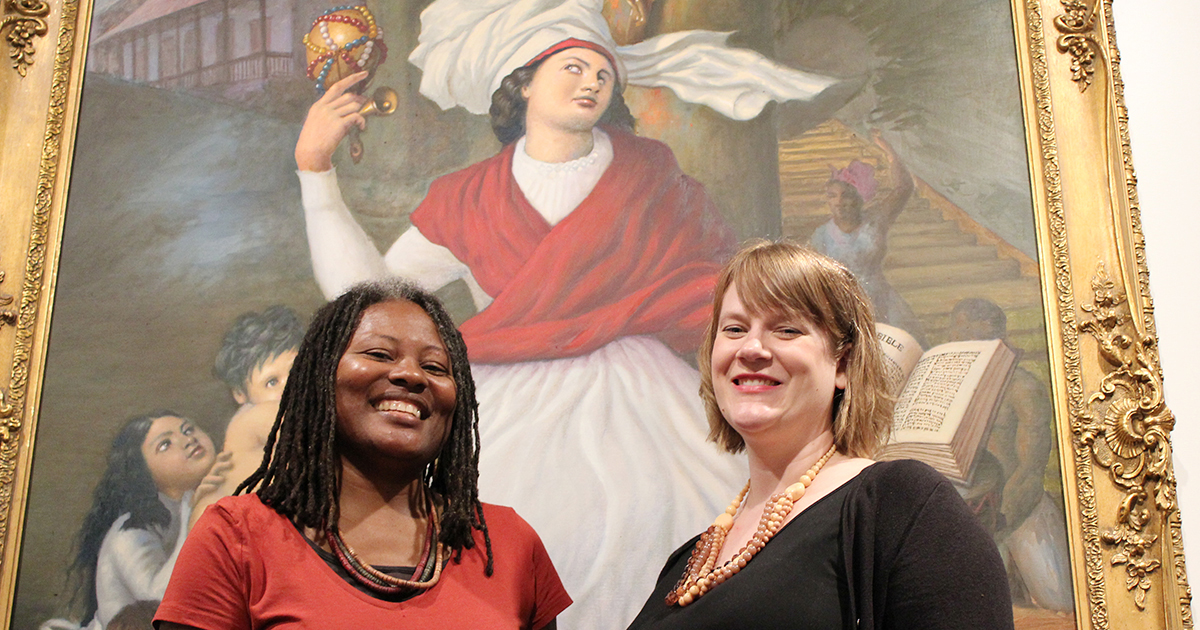 LAWRENCE – True, Haiti has suffered earthquakes and hurricanes, colonialism and other insults. Now, as a sort of antidote, comes an exhibition at the Spencer Museum of Art designed to illuminate the island nation’s beauty and its relations with its continental neighbor to the north. 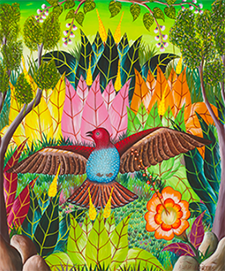 The exhibition “The Ties That Bind: Haiti, the United States and the Art of Ulrick Jean-Pierre in Comparative Perspective” is one of several Haitian-related events taking place this fall on the University of Kansas campus, including the Common Book and Common Work of Art for the 2018-19 school year. The show opens Sept. 8 and runs through Jan. 7.

Cécile Accilien, associate professor and acting chair of the Department of African & African-American Studies, has been working with Cassandra Mesick Braun, the Spencer museum's curator of global & indigenous art, for nearly two years on the exhibition. Accilien’s work on the show was supported by the museum’s Integrated Arts Research Initiative, funded by the Andrew W. Mellon Foundation. Accilien also directs KU’s Institute of Haitian Studies, established in 1992, and is associate director of the Center for Latin American & Caribbean Studies.

Accilien said she was made aware that the Spencer had “a nice collection of Haitian art” soon after she arrived on campus in 2015. That was four years after native Kansan Mary Lou Vansant Hughes gifted nearly 100 works by contemporary Haitian artists to the museum. Hughes became a collector while her husband, an American diplomatic service officer, was stationed in Port-au-Prince during the 1970s.

Hughes loaned about 40 works from her collection for a 2007 exhibition at the Spencer Museum, but that was the last time a significant display of Haitian art occurred at the museum. “The Ties That Bind” offers a chance to stimulate a public conversation about the issues they raise.

The exhibition pairs selections from the museum’s permanent collection with 12 paintings, many of them larger-than-life-size portraits of Haitian historical figures, by Haitian native Jean-Pierre.

At Accilien’s request, Jean-Pierre loaned the Spencer Museum eight new paintings, including a portrait of legendary New Orleans Creole “voodoo queen” Marie Laveau that is the 2018-19 Common Work of Art, and which he made especially for the exhibition. The other four Jean-Pierre paintings on view are loans from private collectors.

Jean-Pierre today has homes and studios in both New Orleans and Atlanta. Accilien said she first became familiar with his work while she was a graduate student at Tulane University in New Orleans.

So when the idea of a Haitian or Caribbean-themed exhibition in 2018 began to take shape, Accilien took some of her IARI grant money and flew to New Orleans with a colleague to visit Jean-Pierre’s studio “to pick out the work that we thought will fit nicely in the exhibit,” she said.

Accilien shared the main themes of the exhibition:

“For each theme we wanted to show how his work connects to the art from our collection. The collection is incredible. You have some of the most important contemporary Haitian artists represented,” Accilien said.

She said showing works that portray Haitians and Caribbean people in all of their complexity helps viewers “to go against stereotypes.”

“They have stereotypes of Haiti being only linked to poverty, disaster, Vodou,” Accilien said. “It’s important for them to see these positive images that go against the stereotypical images of these places. … I think art, music and film provide spaces to have these complex conversations.”

Jean-Pierre will be on campus Oct. 16-24 to participate in a variety of programs, including the Spencer’s IARI program on social history (Oct.16-18) and the Unexpected Caribbean Symposium (Oct. 18-20). And Edwidge Danticat, the Haitian-born author of the 2018 Common Book, will speak at KU Sept. 6, two nights before “The Ties That Bind” opens.

“The Common Book is about a theme that is very much an important part of our current global and national conversation — immigration — but from a global perspective,” Accilien said. “The title is ‘Create Dangerously: The Immigrant Artist at Work,’ so we will be having various conversations with students about what it means to create dangerously; what it means to be an immigrant. This book continues the conversation started by last year’s Common Book, ‘Citizen,’ by Claudia Rankine, which raises important questions about what it means to be a citizen – locally, nationally, internationally or globally – and what our responsibilities as citizens should be.”

Jean-Pierre’s “Marie Laveau,” the Common Work of Art, is on display now, before “The Ties That Bind” opens, in the museum’s Jack & Lavon Brosseau Center for Learning, surrounded by other works from the collection by immigrant artists that are in dialogue with it, Mesick Braun said.