LAWRENCE – The Robert J. Dole Institute of Politics at the University of Kansas has announced that it will honor former U.S. Secretary of State James Baker with the 2018 Dole Leadership Prize.

Baker will accept the award at a public program at the institute at 2 p.m. Nov. 7. The program will be free and open to the public. A livestream of the event will be available at doleinstitute.org. 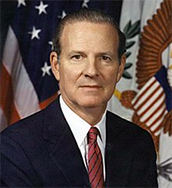 Baker served in senior government positions under three U.S. presidents, including as the nation’s 61st secretary of state under President George H.W. Bush. During that time, Baker traveled to 90 foreign countries as the United States confronted the unprecedented challenges and opportunities of the post–Cold War era.

His career in public service began in 1975 as undersecretary of commerce to President Gerald Ford. He would go on to serve through January 1993, culminating in his appointment as secretary of state.

Baker was White House chief of staff for President Ronald Reagan beginning in 1981, and he was appointed secretary of the treasury by Reagan in 1985. He also served as White House chief of staff and senior counselor to Bush. Long active in American presidential politics, Baker led presidential campaigns for Ford, Reagan and Bush over the course of five consecutive presidential elections from 1976 to 1992. In the 2000s, he served in numerous federal appointments, including as co-chair of the Federal Commission on Election Reform alongside former President Jimmy Carter.

Baker is the honorary chairman of the James. A. Baker III Institute for Public Policy at Rice University. The Baker Institute was founded in 1993 and is one of the nation’s premier nonpartisan public policy think tanks.