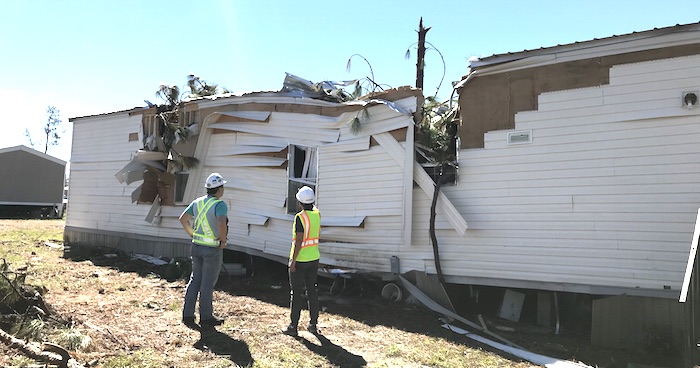 LAWRENCE — It’s commonplace in U.S. coastal areas and floodplains to upraise homes in order to keep living areas dry in case the water rises. However, mobile and wood homes standing a few feet off the ground could be a lot more susceptible to winds exerting force from underneath and increasing the force of loads on walls and ceilings — a possibility that has been studied little, until now. 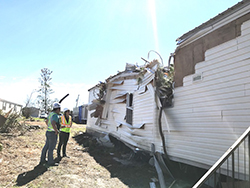 Today, a researcher from the University of Kansas is investigating elevated residential buildings in the aftermath of Hurricane Michael’s impact of the Florida panhandle, where recorded wind speeds reached and exceeded design wind loads along the coast.

Elaina Sutley, assistant professor of civil, environmental & architectural engineering at KU, is performing the work with a new $45,000 RAPID grant from the National Science Foundation. 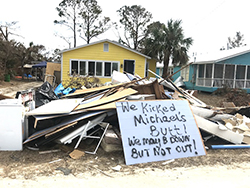 “Hurricane Michael made landfall on October 10, with wind speeds within a few miles per hour of a Category 5, and impacted the Florida panhandle,” she said. “This was the most powerful hurricane that has affected that part of Florida on record and one of the most powerful in history — Andrew was the closest comparison in 1992. With the RAPID grant, we proposed collecting data on two topics. The first was elevated wood housing and the second was elevated manufactured housing — more commonly known as ‘mobile homes.’”

Sutley said elevated residential buildings are governed by a patchwork of building codes, including ASCE 7, the American Society of Civil Engineers’ minimum design loads for buildings. 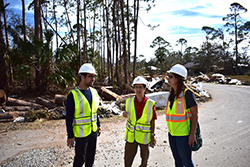 “For elevated wood structures, in ASCE 7 there’s nothing to account for the fact that they’re elevated rather than having four walls on ground, with air flowing underneath that could change pressures on walls and roofs,” she said. “So, we were specifically looking at wind pressure on the exposed underside of floors and anything that could influence pressure on wall surfaces. We also wanted to see if there are fatigue failures of components on the mobile homes. Many mobile homes are designed to 1980s wind loads, so there has been 40 years of updates lacking to design standards. We wanted to see how they’re performing and make some qualitative and quantitative assessments. We think some components may first fail in fatigue leading to catastrophic failure of the system.”

Based on ongoing experimental work, Sutley and her team identified wind damage could be greater to permanently fixed housing elevated between 3 and 7 feet compared with housing elevated less than 3 and greater than 7 feet. To perform an assessment, only a few days after the wind stopped blowing, the KU researcher and her team arrived in the Florida panhandle. 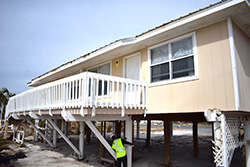 According to Sutley, undertaking research in a disaster zone where so many people recently had lost their homes wasn’t easy.

“This was not the first disaster site I’d been to, but it was important to spend some time reflecting on what we were seeing,” she said. “It was my student’s first time seeing something like this, and he had to pause a few times to take it all in. We were around some people who had just come back home to see what had happened, and it was hard for them to form complete sentences. They were distraught seeing what was going on — sometimes they would start crying. We weren’t interviewing them, we were appropriately asking if we could look at their property — but it was our duty to listen to them if they had something they wanted to share, even though we weren’t using that as data for our research.” 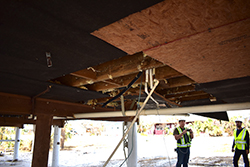 Sutley and her colleagues surveyed damaged housing, making photographs and recording data on their smartphones. The team wanted to record damage to structural and nonstructural components, which often begins with gutter systems, roof-and-wall-sheathing nailing and skirting, which could fatigue and fail under hurricane loads, then cascade into catastrophic failure through vulnerabilities created in the wall and roof systems by these fatigue failures.

“We took pictures of every building site we could access, zoomed out so you could see the whole side,” she said. After checking for safety, she said, “Then we wanted to look underneath where the foundation is exposed to get very close-up pictures of what was going on under the structures. We wanted to see if anchors or concrete-and-pile settings were damaged, and look at roof-to-wall connections, porch attachments, carport attachments and building-envelope components that might be subject to loading — and we took pictures of any damage. We also used a smartphone app, ESRI’s ArcGIS-based Survey123 app. I designed a survey to capture specific information, and the app pulled the geocoordinates, and the date and time.”

This field data will be used to validate experimental and analytical research Sutley and her team are performing to advance the state of knowledge on structural behavior, wind pressures, and component behavior and failure modes for elevated site-built and manufactured housing. The collected data will be analyzed and categorized for damage levels, then mapped with wind-speed and surge height to grasp effects of wind speed and direction on damage for the types and elevations of buildings considered. Further, images and survey data will be stored on DesignSafe-CI, then made available to the broader research and engineering community.

“It would be great for building codes and local decision-makers who determine them,” she said. “In Florida, the mobile home industry and manufactured home residents could benefit from the data as well. The insurance industry should also pay attention — it matters a lot to them.”

Lastly, Sutley suggested residents of mobile homes would do well to safeguard their properties with a few safety measures that are believed to make a difference in high winds.

“One of the things they can do is check the anchorage,” she said. “How are the homes fixed to the ground? North and South Carolina, Florida and California all have had major programs to subsidize the cost of specialized ground anchors, and we saw them on almost every manufactured home in Florida. So, the first thing is to make sure it’s connected to the ground. If it’s just on concrete blocks, it’s likely to fall over in moderate wind speeds. The second thing would be to secure attachments. A lot of the time, there are porches or carport attachments, and these are poorly connected to the ground as well as loosely connected to the main structure. Once removed from the actual home it creates vulnerability because it’s ripping off part of the external building envelope. Thirdly, it's a lot costlier when you start adding sheathing or adding metal hurricane straps to the structure itself — but it’s a major type of retrofit to consider to get significantly better performance.”