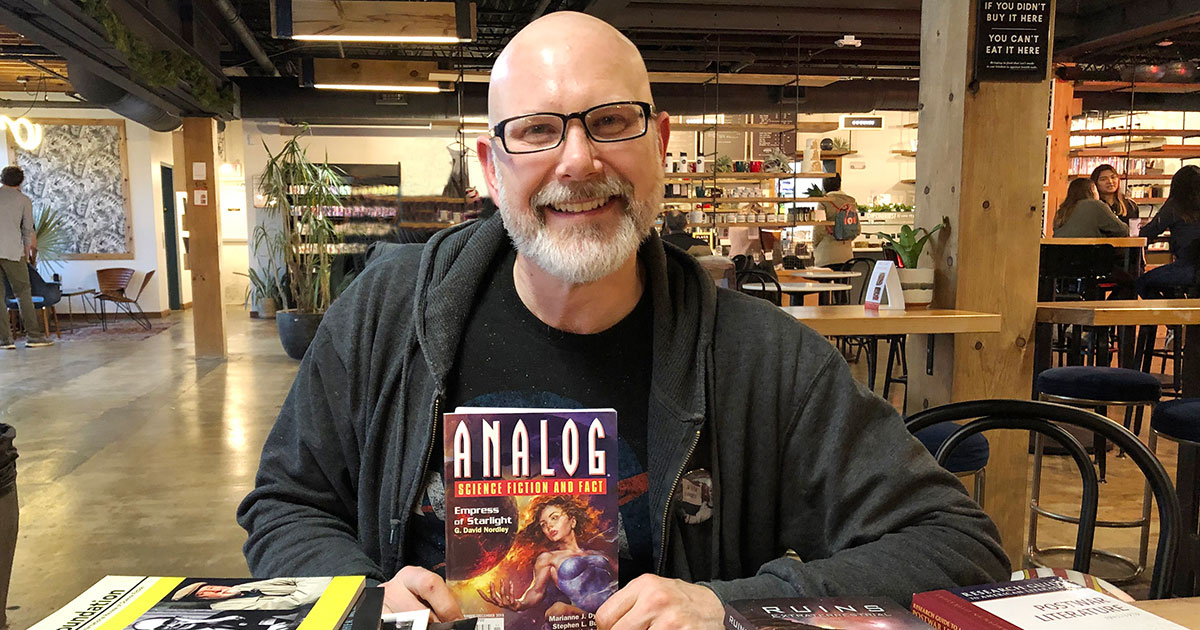 LAWRENCE – Before Christopher McKitterick could sell his latest novella to the venerable pulp magazine Analog Science Fiction and Fact, the editors insisted he justify one of the story’s central conceits: Rather than send individuals on space missions in rocket ships, the protagonist’s civilization itself – an entire solar system – altered its course through space, exploring new corners of the galaxy.

“All the science had to work, all the technology had to work, and the civilizations had to work,” McKitterick said of Analog’s editor, Trevor Quachri. “He was very rigorous that way.”

“So when I got this feedback, I thought, ‘Well, OK, I can fix this. It shouldn't be too hard to move a star, right?’ I was really wrong.”

As a lecturer in the University of Kansas Department of English and director of the Gunn Center for the Study of Science Fiction, McKitterick has been melding scientific facts, or ideas drawn from them, with fiction writing for many years. He also has a background as a technical writer and astronomer.

McKitterick’s latest, “Ashes of Exploding Suns, Monuments to Dust,” appears in the November-December issue of Analog, his work’s seventh appearance in the magazine.

“I'd first gotten the idea for that particular piece of the story back in the 1990s, probably,” McKitterick said. “I was at a conference where John G. Cramer, a science fiction writer and physicist, talked about using something like a solar sail to move a star.

“The idea is that if you know that you're heading toward a star that's going to go supernova a million years from now, you just sort of put a sail around your star and let the photon pressure move you and change your orbit around the galaxy.”

McKitterick said he was determined to make the fiction work, at least from the editor’s point of view, so he set to work on outlining the science. Suffice to say it involves stellar engines, Dyson swarms, black holes and the like.

“I did tons of research,” he said. “I literally spent six months doing math trying to make that one piece work. … So I invented a new way of moving a solar system.

“And I have six pages of research notes and math to prove it works. I sent this all with the much-revised story back to the editor and was like, ‘Here's all of my math. Here's the research that shows people are doing theoretical work on it right now. And we're doing some lab work on things like this process.’ I thought, ‘If you have this level of tech, I can do a little bit of hand-waving stuff here, as long as, for the most part, we know it works.’”

All this just to scientifically justify one of the plot points in “Exploding Suns” and to reinforce the set of parallel metaphors.

That’s before we even get to writing, believably and compellingly, of the inner conflicts and outer actions of the unnamed, ungendered, first-person narrator of the story, a Space Force captain of a race that branched off from the human family tree millennia ago. Or the implications of resisting interstellar empire that the captain represents.

But McKitterick said he was glad Quachri was tough on his first iteration of the story, just as former Analog editor Stanley Schmidt had always been.

“People had to be able to believe that part,” McKitterick said. “I spent so much time doing a thing that really was only there to represent in a metaphorical way what the society is like, and that took me as long as writing the story.

“But I'm really glad that he sent it back to me. The science part added 500 words, at most. But I re-envisioned the character and some of the actions and some of the things that I had gotten critiques on … for how to make it a better story. And I was really happy with it in the end.”

Without giving away too much, McKitterick said, “It's a person-who-learns-better story” with reflections on the personal, societal — even universal — levels, if you look for them. And if you don’t? Well, there’s some good, old-fashioned dramatic action, too.

“I didn't want to write a war story,” McKitterick said. “It's a story about the fallout from war. It’s about what is honorable. What is right? What is noble? What's our duty to our family and to our culture and to the future?

“That's what the main character ends up doing for the rest of their life, helping re-establish these civilizations that had been destroyed, not as museum pieces, but as living civilizations that now are able to change instead of remaining rigid in the ways that caused all of their downfalls.”