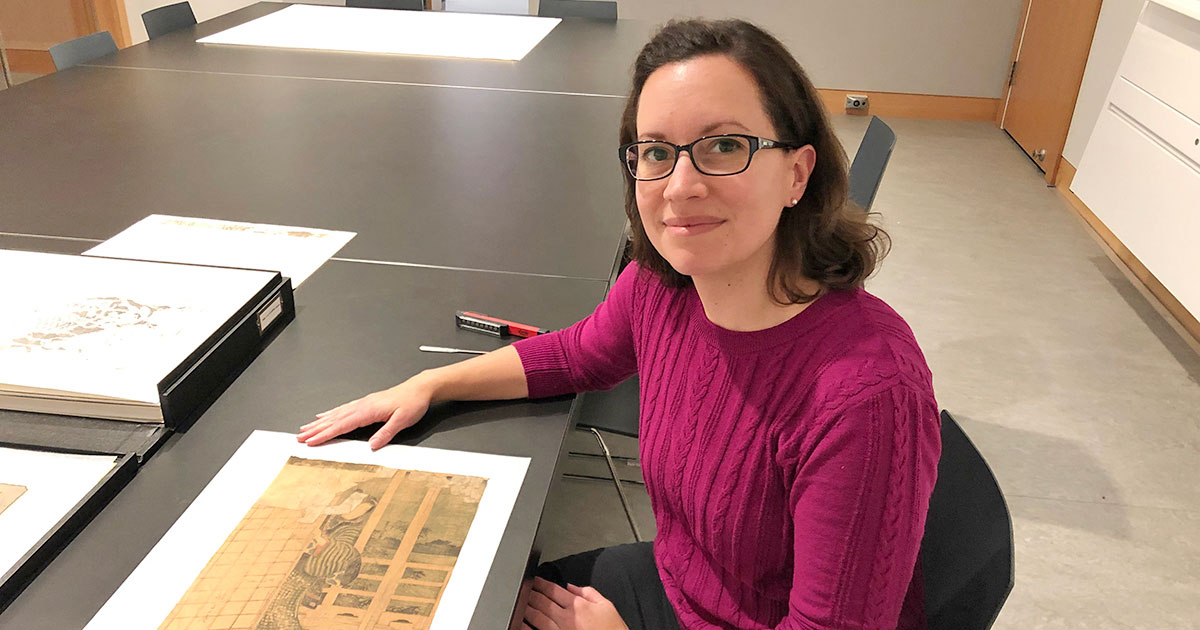 LAWRENCE — Amassing a collection of books and art objects is one thing. Preserving and presenting them for the benefit of the public is quite another. And now, in part through a grant from the Andrew W. Mellon Foundation, the University of Kansas has a new conservator and a new conservation laboratory to help accomplish those goals.

The Mellon Foundation announced the $300,000, four-year grant in February 2018, but it was just last month that Jacinta Johnson arrived on campus to begin her work as associate conservator. The position is a collaborative effort between KU Libraries and the Spencer Museum of Art.

And while for the past 20 years KU Libraries has had a conservation lab in the basement of Watson Library, Johnson will spend most of her time in the newly enhanced and expanded laboratory that opened in July in the Kenneth Spencer Research Library. With grant funds and support from other KU units, the lab has been equipped with large, moveable work tables, a photo bay and a so-called “wet lab” containing a big sink with a de-ionized water dispenser, chemicals, a biosafety cabinet and other specialized conservation equipment.

That’s the stuff Johnson will use in her primary mission of preserving paper objects, prints, drawings, photographs and the like from the KU Libraries’ and Spencer Museum’s collections.

The libraries' head of conservation services, Whitney Baker, said she and the two other conservators on staff concentrate primarily on books and other library archives and materials. And while they obviously work with paper, “we don't work on fine art,” she said.

Johnson has begun polling curators at the libraries (there are seven units on campus) and the Spencer Museum about their priorities for her conservation efforts. She will collate those requests into a plan of work, she said. But one of the benefits of having Johnson on staff, Baker said, is that she will be available to respond when institutional priorities shift.

“The idea is that we would find projects in the collections at both sites – the museum and the library — that have common threads — and then we can build a bigger story to tell the public about conservation and about how these two collections relate,” Johnson said.

Indeed, the two collaborating institutions here are related in that Kenneth and Helen Spencer were a married couple, and their philanthropic donations helped to establish the library and museum that bear their names, respectively. The library celebrates its 50th year this year, while the museum just turned 40.

Johnson said she plans to interact with faculty across the university in hopes of making museum and library collections more available to them. That might mean a professor using archival material for a particular lesson, she said, or perhaps offering experimental possibilities to a chemistry graduate student interested in the polymeric (i.e., adhesive) properties of an old painting.

Another goal for the position is to increase diversity and inclusion in the field of conservation and to model it as a career opportunity for KU students.

Johnson said she came to the field only after she completed her undergraduate degree in fine arts from Portland State University. She later earned a master of science degree from the Winterthur/University of Delaware Program in Art Conservation.

Johnson describes her job as solving a series of problems that the artworks or other works on paper present.

“Before we even begin a treatment,” Johnson said, “we have a discussion with the curator to find out what are the issues here? What’s the goal? How are they planning to use the objects? If it's a print that they've noticed has started to yellow over time, we try to figure out why is it yellowing, and can we do anything about it? And then we'll have a discussion with them about what we see and what we think can be done, if anything at all.”

This may involve researching the artist’s working process and materials, even to the point of trying to divine their intent, Johnson said. Did they mean for the paper to show its age, perhaps? All of this factors into the conservator’s ultimate approach.

Johnson said she looks forward to diving into the work.

“We’ve got this toolbox of techniques, but every item requires something slightly different,” Baker said.

Sofía Galarza Liu, the Spencer Museum’s head of collection management, is excited about the lab’s expansion and Johnson’s advent.

“Conservation work supported by this position will enable the museum to sustain artworks in the collection for the benefit of future generations,” she said.