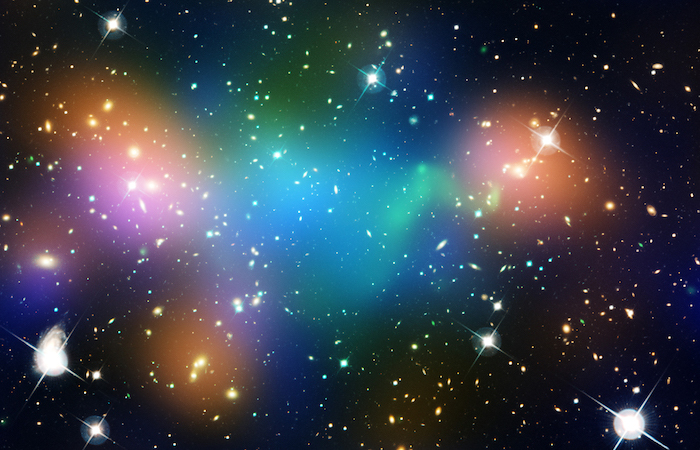 LAWRENCE — Can’t find your house keys? Frustrated by that sock that seemed to disappear during laundry?

Don’t feel so bad. It turns out scientists have a hard time detecting some 95 percent of the matter and energy that make up the universe, according to NASA.

Now, a research team from the University of Kansas has earned a three-year, $750,000 grant from the U.S. Department of Energy EPSCoR State/National Lab Partnership program as well as $150,000 in matching funds from the state of Kansas to hunt new ways to detect and understand dark matter and dark energy.

Particle theorists K.C. Kong and Ian Lewis, and astrophysicists and cosmologists Mikhail Medvedev and Sergei Shandarin will partner with scientists at DOE’s Fermi National Accelerator Laboratory and Argonne National Laboratory to carry out the investigation.

“Most of the universe is a question mark,” said Lewis, assistant professor of physics & astronomy at KU. “Two of the biggest puzzles in fundamental physics are dark matter and dark energy — a whole bunch of matter in the universe we don’t understand. These are ‘known unknowns,’ or big questions out there we know we don’t understand, and those are what we are going after.”

The KU team will work with scientists running supercolliders like the Large Hadron Collider and neutrino detectors at Fermilab, and also generate computer models to guide experiments looking for indications of dark matter and dark energy.

“The group is proposing a comprehensive program that includes very sensitive detectors and accelerators, and state-of-the-art numerical simulations in conjunction with a deep understanding of the complex and exotic dark matter possible interactions and dark energy effects,” said Hume Feldman, professor and chair of physics & astronomy at KU. “Since there are many possible scenarios involved, it is absolutely necessary to explore a wide variety of cosmic energy scales and intensity frontiers, each sensitive to different possible configurations and scenarios of the dark sector.”

“Neutrinos are very weak interacting particles, and their experiments are built to see these rare events anyway, and you could look for dark matter events with those same experiments,” he said. “We’ll use the same detectors, but try to find a new way to use them. One idea of using the neutrino detectors is that some dark matter could accumulate in the sun and it could annihilate itself into different forms of dark matter that comes streaming out of the sun — and hopefully, you could see that with a neutrino detector.”

In the meantime, Medvedev and Shandarin will partner with Argonne National Laboratory on computer simulations of the cosmos, called “N-body simulations,” to model astrophysical forces under a variety of dark-matter scenarios.

The project, which builds on expertise and strengths in KU’s Department of Physics & Astronomy, could push forward scientific understanding of the fundamental makeup of the cosmos.

“I’m describing it as theoretical physics phenomenology,” Lewis said. “My colleague K.C. Kong and I were interested in seeing how beyond-standard-model physics could show up in experimental data, and what could that tell us about fundamental problems like dark matter. We’re trying to bridge pie-in-the-sky theory with actual experiments, we're kind of experts on that. Medvedev and Shandarin are experts in things like the cosmic web and space physics and what you can do with dark energy.”

Along with the investigation carried out with the KU faculty researchers, the new grant will provide funds for graduate and undergraduate KU students and postdoctoral researchers to study dark matter and dark energy.

“We’re budgeted for graduate students and postdocs in the DOE-EPSCoR grant,” Lewis said. “There are also matching funds from the state of Kansas, including additional funding for graduate and undergraduate students. We also support their travel to Fermilab and Argonne National Laboratory to work with our lab partners.”

Photo: This image shows the distribution of dark matter, galaxies and hot gas in the core of the merging galaxy cluster Abell 520. Credit: NASA