LAWRENCE — It’s cliché to describe something very noisy as “louder than a jet engine.” But supersonic jet engines, like those powering fighters flown by the U.S. military, are so much louder than regular jet engines that scientists have a special term for their sound — “broadband shock-associated noise.” 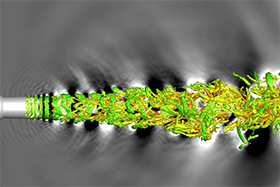 Now, a team of faculty and students from the Department of Aerospace Engineering at the University of Kansas will design and test innovative technologies to cut noise from supersonic military jets. The U.S. Department of Defense’s Strategic Environmental Research and Development Program (SERDP), the DoD’s environmental science and technology program, is supporting a one-year, $200,000 effort at KU, with the potential to expand that support in the years ahead.

“This project will test ideas to reduce jet noise from supersonic military aircraft,” said Z.J. Wang, Spahr Professor of Aerospace Engineering at KU, who is heading the new effort. “At the moment, the noise is so loud that it affects the health of personnel working in close proximity to the aircraft and people living close to the military base. This is a challenging problem, and we’ve suggested some novel ideas which have potential.” 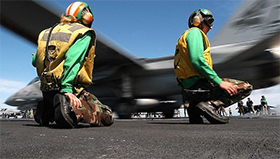 The researchers will investigate the potential of installing vanes inside the jet engine exit nozzle to create “shear layer swirl” that promotes mixing of jet exhaust with surrounding air, thereby cutting noise.

The team, studying computational fluid dynamics and computational aero-acoustics via supercomputers and conducting research in fundamental flow physics jet noise and acoustic measurements at the KU department's Garrison Flight Research Center, will aim for an ambitious three-decibel reduction in jet noise, which in effect cuts acoustic power in half.

“Swirl is the rotational motion of flow,” Wang said. “When supersonic jet exhaust blows out of aircraft nozzle, it’s normally straight out — there would be little to no swirl. The idea here is to generate some strategic rotational motion at the exit to enhance mixing of the jet with surrounding stationary air to reduce supersonic jet noise. There have been a lot of studies in noise mitigation that show this kind of mixing can reduce noise.”

Indeed, mixing of jet outflow with the ambient air to cut noise isn’t a new idea. Commercial jets have used devices on jet nozzle lips for years to achieve a similar noise-cutting effect. But according to Wang, the technology used on subsonic jets isn’t as effective to the U.S. military’s supersonic fighters.

“Commercial airliners have used the chevron nozzle — a saw-tooth kind of shape — to reduce noise,” he said. “For subsonic aircraft, that concept has been shown to be very effective, so it’s almost universal in commercial airplanes these days. But that concept isn’t as effective for supersonic jets. Here we’re trying to enhance mixing with strategic production of rotational flow. I don’t think anybody has tested this idea yet in this setting. Swirl generation vanes will be integrated inside the nozzle wall to generate the desired level of rotational flow.”

One design challenge confronting the KU researchers is how to strategically generate enough swirl in the supersonic jet’s exit flow to cut noise while minimizing the loss of the jet’s thrust.

“The swirl vanes will inevitably block the flow and produce drag somewhat, so there will be some performance loss in terms of thrust,” Wang said. “Our idea in strategic swirl injection is to minimize this loss while at the same time maximizing jet noise reduction.”

The team will investigate the possibility of noise-reducing vanes adjusting to a neutral position after a supersonic jet has taken off, so the jet engines operate with a very minor loss of power once the aircraft is at cruising altitude.

“Vanes can be adjusted to purely axial position, with nearly zero penalty in terms of thrust,” Wang said. “You’ll essentially get the full thrust.”

The concept is based on previous investigations by members of the team, Wang said.

“Professors Saeed Farokhi and Ray Taghavi published several works on enhanced mixing of swirling jets with application to fuel and air to maximize engine combustion efficiency by means of swirl,” he said. “It was proven experimentally that it was effective. So, when the DoD call for a proposal came and the five of us were interested, we had some brainstorming sessions and noted that the mechanism of chevrons was just enhanced mixing — so we knew that embedded shear layer swirl might have potential in supersonic jet noise reduction.”

The grant also will help train a new generation of aerospace engineers via experiments at KU’s flight research center and computer modeling at two facilities — the KU Center for Research Computing and the National Center for Supercomputing Applications (where a separate grant to Wang secured 200,000 node hours of computing time on Blue Waters, one of the world’s biggest supercomputers).

“We’re employing two doctoral students, one master’s student and one undergrad researcher,” Wang said. “Those students will be doing experiments and computations, closely working with faculty. This project on advanced technologies and innovative concepts will provide valuable experience for our students that could shape their future.”

Top image: Research at the University of Kansas could cut jet noise and benefit ground and carrier-based personnel in the U.S. military. Credit: U.S. Navy.