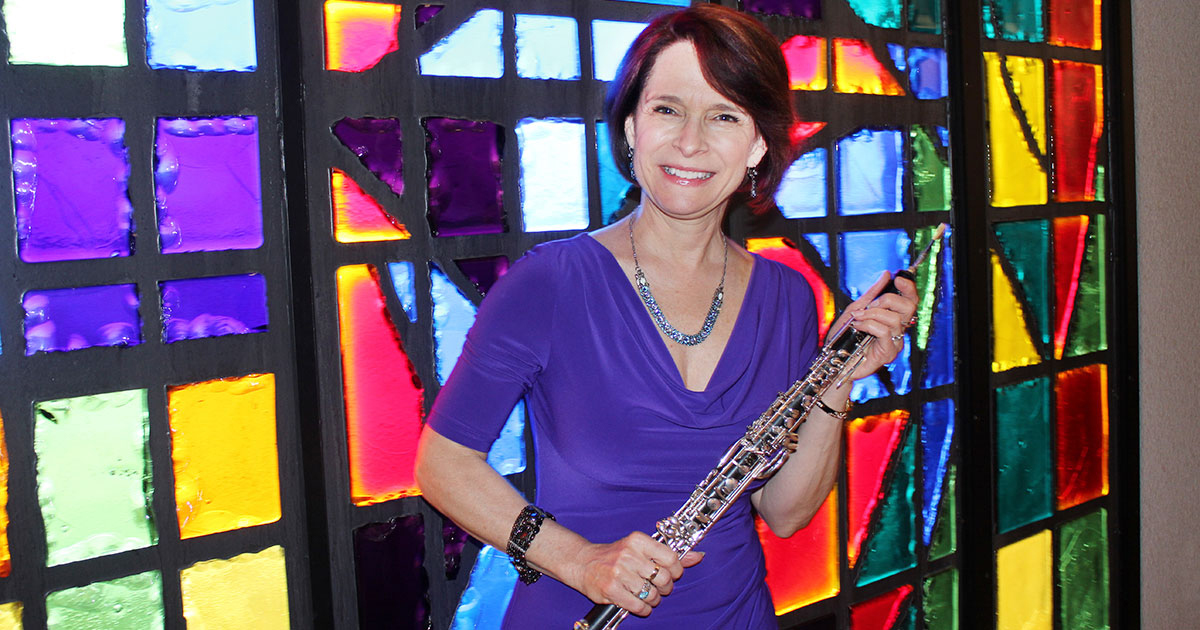 LAWRENCE – For an oboe player, the music of the Baroque Period is a logical place to begin recording. That’s what University of Kansas Professor of Music Margaret Marco did with her first solo CD in 2009, “Hidden Gems: Oboe Sonatas of the French Baroque.”

In contrast, her new recording, “Still Life,” features Marco and several fellow composer/performer faculty members in a series of new works for solo and chamber ensemble. The recordings were made on campus, too, at Swarthout Recital Hall, Bales Organ Recital Hall and the studios of Kansas Public Radio.

Despite critics who praise her tone and command of her instrument (she performs with the Kansas City Chamber Orchestra and other groups), there’s no need for her to re-record the standard classical repertoire for oboe at this point, Marco said.

“The first CD consists of baroque oboe sonatas by little-known French composers,” she said. “In the early 2000s, I got a grant to go to Paris and study the works that are in the Bibliothéque Nationale and found that there were hundreds of works for the oboe that weren't published and weren’t recorded and probably hadn't been performed in 300 years. So I brought some of the prints home to edit and record. … I'm actually planning to return to the Bibliothéque Nationale for a further look at the music and to record a second CD.”

In contrast, she said, her latest recording “is all new music.” However, Marco noted, the recordings are alike in that they feature music that hadn't been previously recorded.

“I'm happy with the contribution — to be able to present new pieces to the public and add beautiful, new music to the repertoire,” Marco said. “And that's true about both CDs. It just requires slightly different skills to record music from basically the two bookends, chronologically speaking, of the entire oboe repertoire.”

For the new CD, Marco said, she was inspired by the “many talented composers and my colleagues here” at KU.

“It's almost like ‘let's just get this news out there,’ because this latest CD mostly comprises compositions by composers with ties to Kansas.”

The cover image is of Cathedral Grove in Muir Woods National Monument in northern California, whose towering redwoods were the inspiration for Pierce’s piece.

While two of the pieces feature the members of the flute, oboe and piano trio Allegrésse – Lawrence-based flutist and KU alumna Annie Gnojek and KU music lecturer Ellen Sommer on piano – Haaheim’s “Circular Ruins” features music generated by a computer and by percussionist and recording engineer Jason Slote.

“Contemporary composers often write music that pushes the envelope beyond what is considered normal playing technique,” Marco said. “This causes performers to dig a little deeper and discover new ways of producing sound. Ingrid’s music exploits the sheer beauty of timbre of each instrument she writes for. In combining the acoustic sounds of oboe and percussion with computer-generated sonorities, Kip is creating entirely new sounds for the oboe. The idea of adding computer-generated sounds to live music has been around for a while, but I’ve never recorded a piece of this nature before. Kip’s is one of the only pieces written for oboe, percussion and computer.”

Furthermore, Marco said, Pierce’s “Cathedral Grove” calls for “the use of extended techniques.”

“For this work I'm creating sounds that Bach never dreamed could come out of the oboe. The piece explores the extremes of the oboe tessitura. Pierce also calls for timbral trills and multiphonics. It actually sounds quite beautiful. It's not like suddenly the instrument sounds hideous — far from it. It's just like ‘wow, this instrument can make all these sounds that composers before the 20th century never dreamed of.’”

Marco’s connection to Juliana Hall is a video recording Marco made of Hall’s works for oboe and soprano and English horn for the International Alliance for Women in Music Online Conference. Hall writes extensively for voice. Her work, titled “A Certain Tune,” is a set of five songs based on the poetry of Sara Teasdale.

Look for Marco’s “Still Life” at the end of May on CD Baby, iTunes, Amazon, YouTube and Spotify.