LAWRENCE — Martha “Matt” Mueller, a University of Kansas alumna and retired librarian, left an estate gift of more than $1.4 million to support the university’s libraries and to provide scholarships for students with financial need. A self-described saver, Mueller lived frugally while being able to travel the world. 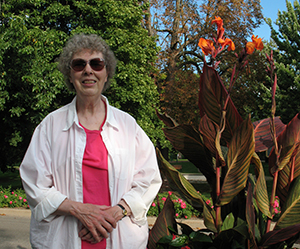 Mueller, known by friends as Matt, retired in 1994 as a librarian at the New York State College of Ceramics at Alfred University in Alfred, New York, where she had worked for 25 years. She was a world traveler who visited more than 20 foreign countries and all of the lower 48 states. She died in 2018 at 83.

Mueller also was dedicated to service in her community: She had a fondness for children and dogs and volunteered regularly at her local Montessori preschool and at a greyhound rescue organization. She often could be seen collecting cans for recycling, and she donated the money she collected to the local public library to the tune of $2,000 a year.

A Joplin, Missouri, native, she was a dedicated student who graduated from high school at 16. She received a bachelor’s degree in education from KU in 1955 when she was 19. She was a proud KU alumna, loved the campus architecture and often reminisced about her time there, especially as an employee at KU libraries.

She started saving early. In a memoir she wrote, “While working as a part-time student assistant at two of [KU’s] libraries, I saved every penny of the 55 cents an hour I earned.” She used that money to pay for a trip by ship to France, as well as a guided bus tour of Europe.

“The funds that Matt Mueller has directed to KU Libraries will directly support our mission to transform lives by advancing discovery, innovation and learning,” said Kevin L. Smith, dean of libraries. “We are beyond grateful for this expression of support that will benefit current students and faculty as well as future generations of scholars.”

The gift establishes the Mueller Family Fund, which will be divided in half to provide unrestricted support for KU libraries and to create undergraduate scholarships for students who have financial need, with preference for students from Joplin, Missouri, and Eureka, Kansas. The Mueller Family Fund recognizes her mother and father, Helen and Felix Mueller, and her late sister, Jeanne Mueller Lewin. Helen and Jeanne were both KU graduates.

Mueller earned a master’s degree in library science in 1958 from the Carnegie Institute of Technology. She worked as a junior high English teacher in Eureka, as a researcher and librarian for an investment banking firm on Wall Street in New York and at Oakland University’s Kresge Library in Rochester, Michigan. At Alfred University, she was an avid team trivia competitor and supported the school’s performing arts.

She was bitten by the travel bug early in her life. She was determined to complete a circuit of the world thanks to a remark from a classmate in grade school who boasted that her grandmother was so wealthy, she had traveled around the globe. “Then and there I decided to prove when I grew up that one did not need to be rich to do so,” Mueller wrote in her memoir.

She loved sharing travel stories as well as stories of her childhood experiences, especially during World War II.