Those are the responses the word “fat” elicits. 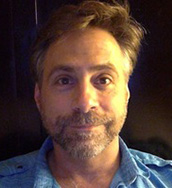 “Disgust is an emotion that’s not about vision. It’s about touch, the fear of contact,” said Christopher Forth, a University of Kansas professor of history and Dean’s Professor of Humanities.

“If it’s not about aesthetics, why does fat provoke this sense of, ‘I can be contaminated by this?’”

That’s one of the questions addressed in Forth’s upcoming work, “Fat: A Cultural History of the Stuff of Life” (Reaktion Books, 2019). The publication has already garnered national interest after The Atlantic published a 2,000-word excerpt in May taken from the chapter “Grease and Grace: The Disenchantment of Fat?” 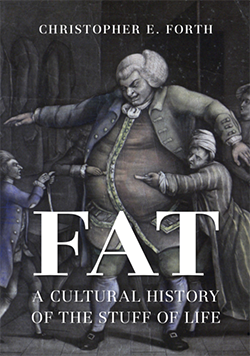 He wrote, “Only her arms and legs remained intact. After examining what was left of her body, a local physician concluded, in a report cited years later, that the conflagration ‘was caused in her entrails’ by the variety of combustible materials to be found there, including alcohol and fat, ‘an oily liquid … of an easily combustible nature.’”

Forth said, “I have two favorite chapters, and they’re both gross.”

In addition to the aforementioned “Grease and Grace,” he favors one titled “The Fat of the Land” because of his fascination with its agricultural context.

“I had heard the phrase ‘living off the fat of the land,’ which I thought was a metaphor. It’s not. That phrase means the soil is literally sticky, unctuous, swelling. When people used to call soil fat, they meant it,” he said.

Overall, the professor describes the book as “a dramatic reinterpretation of fat and the reasons for the stereotypes about it.”

Forth spent 11 years researching and writing “Fat.” He traveled to Australia, the U.K. and many regions of the U.S. while investigating the subject.

The 352-page book delves into the history of fat, tracing the cultural, philosophical, religious and even racial connections. What once was considered healthy and desirable slowly morphed into the modern perception. He said this attitude can first be attributed to the Greeks, who originally celebrated then began to distrust less-than-Adonis-like physiques.

But the tipping point came in the late 18th century.

“Fat became a kind of pollutant that had to be excreted in order to purify the body,” Forth said.

“You start to see fat observed in non-Western peoples — particularly Africa, India and China — and this becomes a problem of not just connecting it with dirt but of nonwhiteness. It was unseemly, filthy and uncivilized.”

Forth asserts contemporary reactions by the medical community reinforced this negative outlook.

“Physicians will try to address the symptoms being manifested with immediate reference to a person’s weight — the idea that losing weight will fix this or that problem, which it won’t. The weight in many cases is incidental to the actual problem. So the health care industry is caught up in their own sense of disgust and misunderstanding about those who are overweight,” he said.

As someone who tries to avoid using the word “obesity” because of its pejorative connotation, Forth said individuals can simply look at the political news of the day to see how conflicted Americans are when it comes to the concept of fat.

“You have a lot of people who very rightly condemned him for his overt, nasty fat-shaming. But after the election, it was common to call out Trump on his own fat, but also to attribute fatness to his supporters — then go the extra mile and suggest fat is connected to foolishness or stupidity. Then they connect that to the image of domesticated animals who follow and do what they’re told,” Forth said.

“So the fat-shaming of women that many Hillary Clinton supporters rightly condemned, they seem very happy to fat-shame on different grounds when it seems OK.”

This is the fourth book written solely by Forth, who’s been at KU since 2007. Past work includes “Zarathustra in Paris: The Nietzsche Vogue in France, 1891-1918,” “The Dreyfus Affair and the Crisis of French Manhood” and “Masculinity in the Modern West: Gender, Civilization and the Body.”

Forth considers his expertise to be the history of the body, including sexuality, senses and emotions.

As for the ultimate influence of “Fat: A Cultural History of the Stuff of Life,” Forth said, “I’d like it to expand the ways we think about how and why fat stereotyping works.”