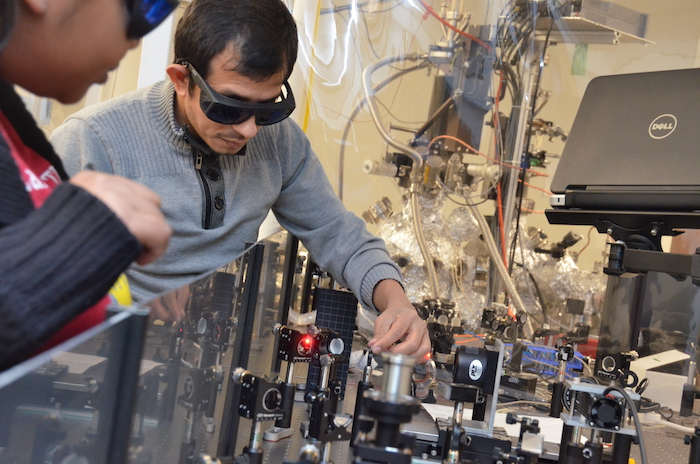 LAWRENCE — Imagine printing electronic devices using a simple inkjet printer — or even painting a solar panel onto the wall of a building.

Such technology would slash the cost of manufacturing electronic devices and enable new ways to integrate them into our everyday lives. Over the last two decades, a type of material called organic semiconductors, made out of molecules or polymers, has been developed for such purposes. But some properties of these materials pose a major hurdle that limits their widespread use.

“In these materials, an electron is usually bound to its counterpart, a missing electron known as ‘hole,’ and can’t move freely,” said Wai-Lun Chan, associate professor of physics & astronomy at the University of Kansas. “So-called ‘free electrons,’ which wander freely in the material and conduct electricity, are rare and can’t be generated readily by light absorption. This impedes the use of these organic materials in applications like solar panels because panels built with these materials often have poor performance.”

Because of this problem, Chan said “freeing the electrons” has been a focus in developing organic semiconductors for solar cells, light sensors and many other optoelectronic applications.

The introduced 2D layer allows the electrons to escape from “holes” and move freely. The findings have just been published in the Journal of American Chemical Society, a leading journal in chemistry and interfacing areas of science.

Over the last few years, many researchers have been investigating how free charges can be generated effectively from hybrid organic-2D interfaces.

“One of the prevailing assumptions is free electrons can be generated from the interface as long as electrons can be transferred from one material to another in a relatively short period of time — less than one-trillionth of a second,” Chan said. “However, my graduate students Tika Kafle and Bhupal Kattel and I have found the presence of the ultrafast electron transfer in itself is not sufficient to guarantee the generation of free electrons from the light absorption. That’s because the ‘holes’ can prevent the electrons from moving away from the interface. Whether the electron can be free from this binding force depends on the local energy landscape near the interface.”

Chan said the energy landscape of the electrons could be seen as a topographic map of a mountain.

“A hiker chooses his path based on the height contour map,” he said. “Similarly, the motion of the electron at the interface between the two materials is controlled by the electron energy landscape near the interface.”

Chan and Zhao’s findings will help develop general principles of how to design the “landscape” to free the electrons in such hybrid materials.

The discovery was made by combining two highly complementary experimental tools based on ultrafast lasers, time-resolved photoemission spectroscopy in Chan's lab and transient optical absorption in Zhao's lab. Both experimental setups are located in the basement of the Integrated Science Building.

In the time-resolved photoemission spectroscopy experiment, Kafle used an ultrashort laser pulse that only exists for 10-quadrillionths (10-14) of a second to trigger the motion of electrons. The advantage of using such a short pulse is the researcher knows precisely the starting time of the electron’s journey. Kafle then used another ultrashort laser pulse to hit the sample again at an accurately controlled time relative to the first pulse. This second pulse is energetic enough to kick out these electrons from the sample. By measuring the energy of these electrons (now in a vacuum) and using the principle of energy conservation, the researchers were able to figure out the energy of electrons before they were kicked out and thus reveal the journey of these electrons since they were hit by the first pulse. This technique resolved the energy of the excited electrons as it moves across the interface after the light absorption. Because only electrons near the front surface of the sample can be released by the second pulse, the position of the electron relative to the interface is also revealed with atomic precision.

In the transient optical absorption measurements, Peng Yao (a visiting student) and KU graduate Peymon Zereshki, both supervised by Zhao, also used a two-pulse technique, with the first pulse initiating the electron motion in the same way. However, in their measurements, the second pulse does the trick of monitoring electrons by detecting the fraction of the second pulse that is reflected from the sample, instead of kicking out the electrons.

“Because light can penetrate a longer distance, the measurement can probe electrons in the entire depth of the sample and therefore provide complementary information to the first techniques that are more ‘surface sensitive,’” Zhao said. “These detailed measurements enabled us to reconstruct the trajectory of the electron and determine conditions that enable the effective generation of free electrons.”

The collaborative work from the two research teams will provide a blueprint on how to design interfaces that can turn light into electrical current with high efficiency. Both teams are funded by the National Science Foundation through a CAREER Award (Chan) and a Condensed Matter Physics Award (Zhao).