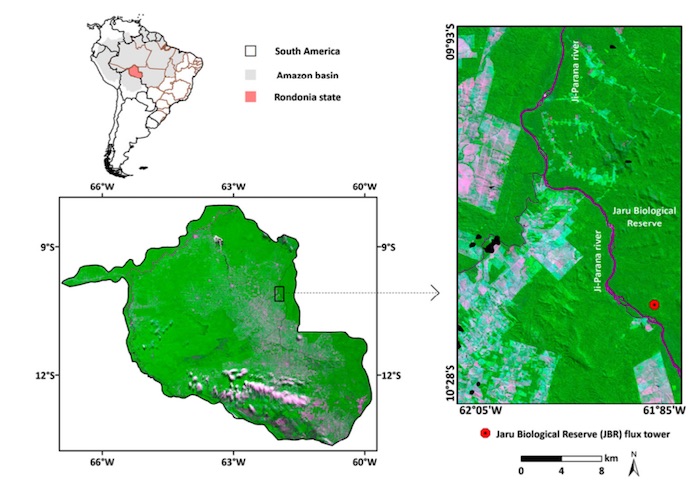 LAWRENCE — Throughout August and early September 2019, media around the world have reported on the extensive forest fires ravaging Brazil’s Amazon rainforest. Much of the concern stems from the Amazon’s significance to regulating the world’s climate. According to the Associated Press, the Amazon absorbs 2 billion tons of carbon dioxide every year — about 5% of global emissions. Thus, fires in the region eat away at this carbon-absorbing capacity while at the same time adding carbon to the air through burning. 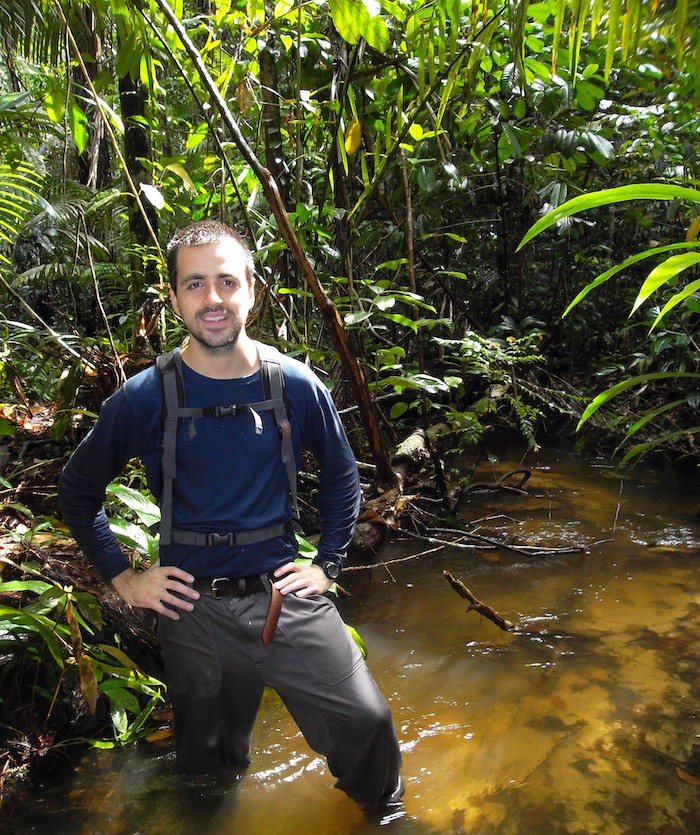 A recent study in the peer-reviewed journal Ecohydrology headed by University of Kansas researcher Gabriel de Oliveira gives important context to the fires burning big swaths of the Amazon today, most of which were set intentionally by farmers and ranchers to convert forest into land suitable for grazing animals or growing crops. The researchers sought to discover how these changes to land cover affect the exchange of water and heat between the surface of the Amazon and the atmosphere overhead.

“This is the first study to examine the biosphere-atmosphere interactions in the Amazon with such high spatial resolution satellite imagery,” said de Oliveira, a postdoctoral researcher in the Department of Geography & Atmospheric Science at KU. “We tried to understand the impacts of land-cover changes and deforestation in general. When you clear-cut the forests, and you convert it either to pasture or agriculture — or cut the forest, but for some reason don't plant anything and then have a type of vegetation called ‘secondary succession’ — our idea was to try to understand how that impacts energy, like the radiative fluxes and water fluxes, or evaporation in general.” 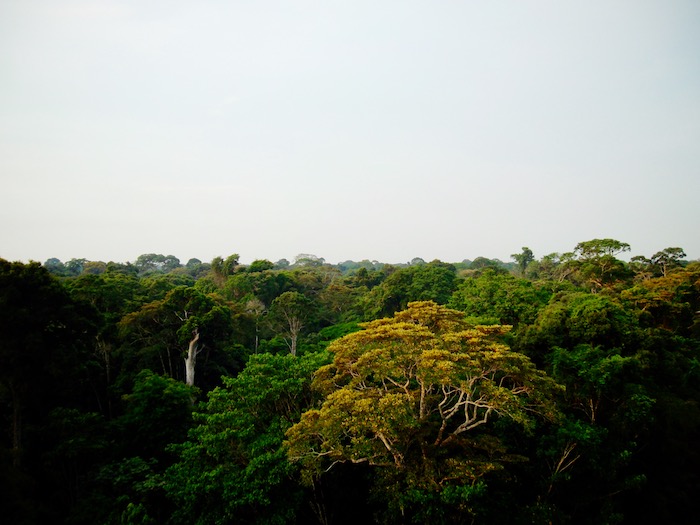 In the paper, de Oliveira and his colleagues analyzed information from both satellites in space and weather stations on the ground in the Amazon. With data from the Advanced Spaceborne Thermal Emission and Reflection Radiometer (ASTER) and Large‐Scale Biosphere‐Atmosphere Experiment in Amazonia (LBA), they examined surface energy and water changes over different land‐cover types in one wet year and one drought year in eastern Rondônia state, Brazil. The team also found statistically significant differences in several important measures prior to and after one year of deforestation.

"Using NASA satellite images with high spatial resolution (15m) obtained by the ASTER sensor in Rondônia state, in the south-western Brazilian Amazon, we found that deforestation and consequent transition to pasture or agriculture to grow soybean tend to increase in two to four times the soil and air temperatures in the region,” de Oliveira said. “We also observed an approximately three times higher evapotranspiration over forested areas in comparison with nonforested areas.” 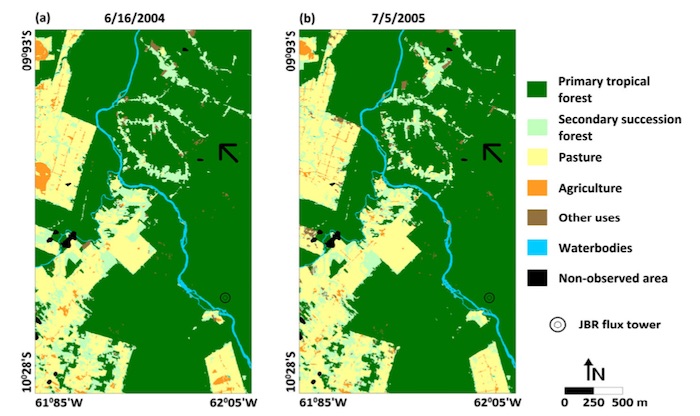 The researchers discovered significant variances between areas on opposite sides of the Ji-Paraná River, one side of which had suffered more deforestation than the other side, located within the Jaru Biological Reserve protected area. They measured spatial variation of albedo (or the fraction of the incident sunlight that the surface reflects), net radiation (or the total energy, derived from sunlight, that’s available at the surface), soil and sensible heat fluxes (or how much heat is transferred from the surface to the atmosphere), and evapotranspiration (the process by which water is transferred from the land to the atmosphere by evaporation from the soil and by transpiration from plants).

De Oliveira, who was raised in Brazil, said the rest of the world depends on the Amazon region to help moderate global climate.

“It’s important because it’s the largest rainforest in the world,” he said. “Precipitation in the tropics, all the water fluxes that go on in the tropics, affect the whole world. The Amazon has a very important role in that. There's no other area in the world like the Amazon’s unique ecosystem. It’s pretty fascinating. I’m from South Brazil, a totally different environment than the Amazon. You could compare it with Kansas. But when I started studying for my master’s degree, my adviser told me, ‘You're going to work in the Amazon rainforest.’ And I told her I’d never been there. But I spent two months in the rainforest doing research. And of course, you know, I fell in love. I'm very passionate about the Amazon and have been there so many times since then, so I have a lot of experience and stories of things that have happened there.” 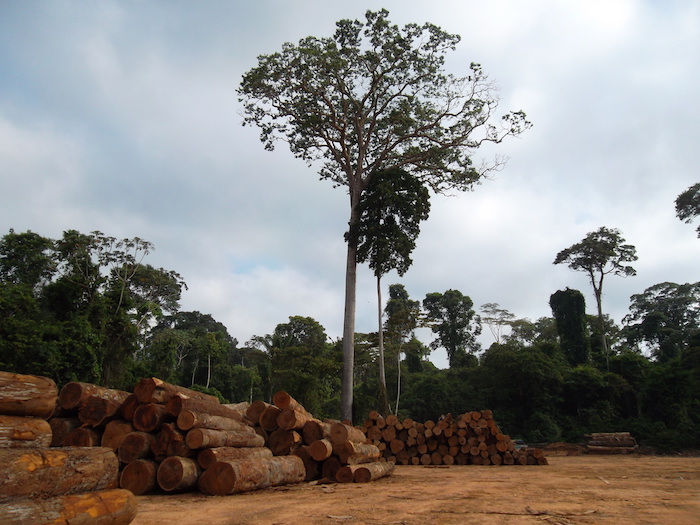 The KU researcher cautioned that although forest fires in the Amazon have received attention in the media this year, the fires happen to a greater or lesser degree every year.

“Fires in the Amazon happen every year during the dry season,” de Oliveira said. “We have agricultural areas, areas that were deforested in the past — but in order to clear the area for the next year, or to make the soil a little bit better for the next year, they set a fire. They claim they’re only setting fire to burn agricultural lands. But sometimes the fire gets out of control, and it plays a part in more deforestation. Fires get out of control in agricultural land and reach the forest and burn the forest. But these fires happen in the Amazon every year, so it’s pretty straightforward. The worst years were in 2005, 2010 and 2015 because of severe drought events. Everything was really dry, and the fires would get out of control. There are no natural fires in the Amazon. They’re all set by human beings.”

Top image: This map shows the study area and location of the flux tower used in this study.

Middle right image: Land‐cover map of the study area for (a) June 16, 2004, and (b) July 5, 2005. The arrows show the fishbone pattern of deforestation in the Brazilian Amazon.