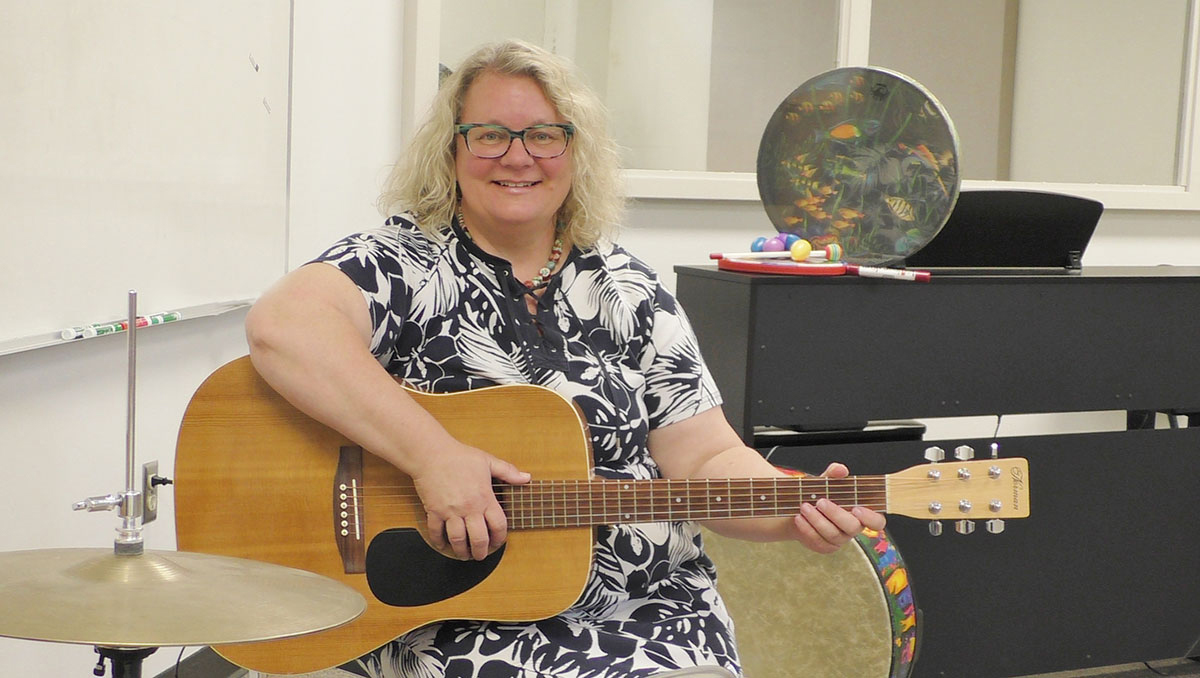 LAWRENCE – Telling an adult, much less a preschooler, to calm down is easier said than done. But it is a skill that can be learned.

So that is what Deanna Hanson-Abromeit, University of Kansas associate professor of music, is working on. She and a colleague recently won a grant from the American Music Therapy Association to experiment with what they believe is an effective way to train preschoolers to regulate their emotions.

“You hear a song from childhood, and it brings you right back to that original memory with the smells and the emotions and everything, right? So there's this real power in music,” she said.

Clearly, Hanson-Abromeit said, music has a transformative power that therapists want to tap. Hanson-Abromeit said the concept she calls musical contour regulation facilitation, or MCRF, stemmed from her questioning the whole notion of music as therapy. The hope is that learning emotion regulation during childhood will help the children resist the urge to act out in violent, counterproductive ways when they become teens and adults.

But in Hanson-Abromeit's clinical work with premature infants, she said, “I really didn't understand what was creating change. I did recognize that subtle adjustments in tempo, melodic contour and dynamics created very subtle but important changes in these premature infants — physiological and behavioral responses. And that really started me asking major questions.”

Hanson-Abromeit said music therapy emerged after World War II when physicians began noticing that making music with veterans suffering from what we now call post-traumatic stress seemed to make them calmer and happier. KU’s School of Music was a pioneer in the field. But of the intervening years, she said, “Neuroscience has given us so many more avenues for understanding music. … And yet we still have that question of how and why is music functioning for therapeutic change?”

If that can be defined, the KU researcher said, “then we can define and create targeted music interventions.”

That is what Hanson-Abromeit and her colleague Kimberly Sena Moore, assistant professor of professional practice at the University of Miami’s Frost School of Music, are now exploring.

Their previous study in the Journal of Music Therapy showed evidence that typical preschoolers benefited, in terms of emotion regulation, from MCRF training.

“Emotion regulation tends to develop from a perspective of external cues,” Hanson-Abromeit said. “When a baby cries and a caregiver comes over, figures out what the baby's needs are and meets them, she is providing regulation for their aroused state by meeting their needs. As we age, a shift happens for less and less external cues as we start to learn how to do that internally. For example, we provide pacifiers to babies, and they learn that by sucking, they can calm themselves. They also notice what it feels like when they're aroused — they're hungry, they're crying, their diaper is wet — and nobody responds to them.

“As we age, we start to gather strategies from around us, and we either develop healthy emotion regulation or we don’t.”

“Emotion regulation is tied to long-term executive functioning, our ability to set goals and move forward,” she said. “It's tied to learning and being able to pay attention in the classroom. There are all kinds of health issues that are related to lack of ability to regulate yourself. We may exhibit behaviors such as aggression or anxiety.”

In a 2015 Frontiers of Neuroscience article, Hanson-Abromeit and Sena Moore described what characteristics of music stimulated what types of physiological changes during various states of arousal.

Knowing what types of sounds work in this way, Hanson-Abromeit said, “We can compose music that's intentionally designed to create the change.” So the researchers wrote their own simple songs, designed either to stimulate or calm, for use in the MCRF intervention. Hanson-Abromeit demonstrates in the video at right.

In their previous feasibility study, “There were moderate effect sizes, and it was shown to be acceptable to the parents and teachers,” Hanson-Abromeit said.

In their upcoming study, the 15-minute experimental periods will expose children to music that shifts up and down, back and forth, between high- and low-arousal sounds. And whereas their previous experiment dealt with typically developing children, the study that starts in the fall and runs through December will target at-risk youths at a Head Start facility in the Miami area, where families all have incomes at or below the federal poverty line.

“The primary outcomes of this study that we're looking at is our dosage,” Hanson-Abromeit said. “We want to know is this intervention effective if done three times a week, or just one time a week?”