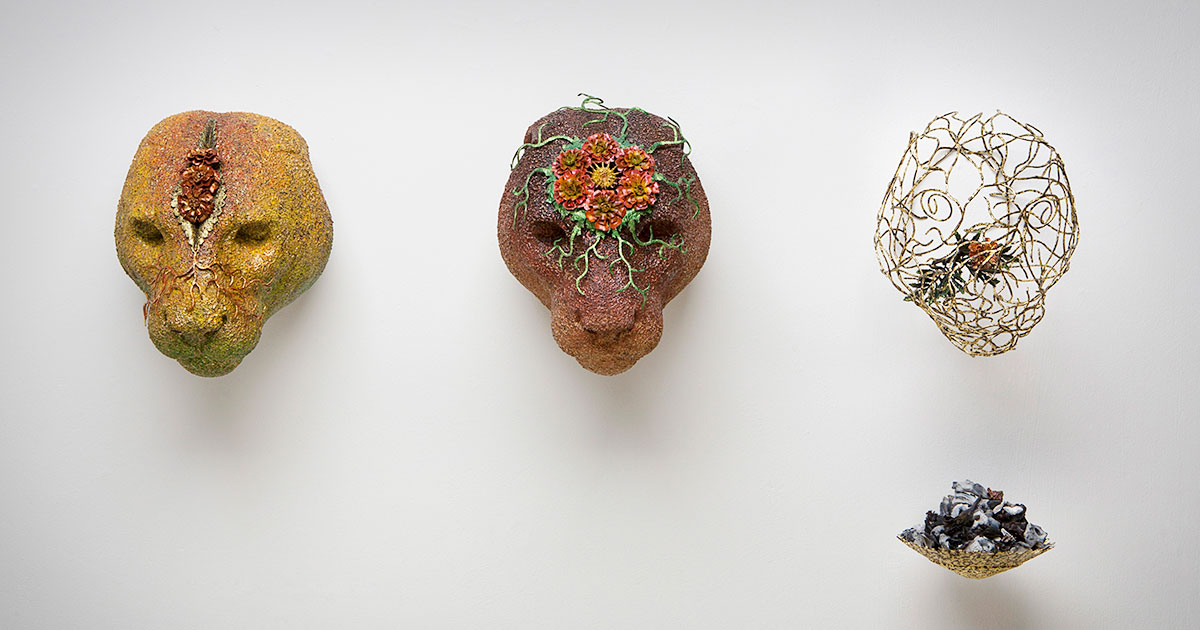 LAWRENCE – If you want a Kansas City Royals-branded casket or a Marine Corps urn, you can buy one online. But if you want a one-of-a-kind funerary urn or a reliquary shaped like a marigold flower, then Gina Westergard, University of Kansas associate professor of visual art, is the person to see.

The metalsmithing artist was inspired to create vessels for cremains after moving to the countryside in 2000.

“A sabbatical to Italy, marrying an organic farmer and moving to the country shifted my focus,” Westergard said. “I thought, as a maker of functional objects, what is the most significant object I can make? If I'm making jewelry, I'm thinking about the wearer. Or if I'm making a teapot, I'm thinking about somebody using it to serve tea. So as a maker of functional objects, an urn is the most significant object I could make. Because within it lies a human, and you have the whole history connected to this person. I'm interested in the idea that objects are really not inanimate because we bring our own stories; we bring our own memories. We bring connections that are associated with us to objects, to the work, and I think that's what makes them more special and unique.”

From Italy, Westergard said, she has incorporated the concept of the reliquary, or highly decorated holder to venerate a bit of the physical remains of Catholic saints. Another influential encounter during that trip, Westergard said, came while hiking in the Italian Alps, when she came upon cemeteries containing headstones engraved with photos of the deceased.

“Some of the graves felt so intimate that I felt like a voyeur, but they just really grabbed me,” she said. “I started thinking more about these objects that tell stories, and that led into the funerary urn.”

When Westergard moved to the farm, living on 137 acres near Pomona, she quickly and intimately encountered the circle of life and death among animals. Simply put, she was inspired by roadkill.

“I wanted to do some sort of tribute to them,” she said, showing off a photo of the first urn of its type that she created. “It was very cathartic for me. This is the first piece where I took the jewelry off of the body and put it into the vessel.” 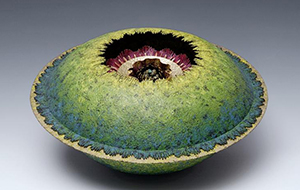 Many of Westergard’s urns have lids that come off and/or have recessed areas into which smaller vessels fit. She likes the interaction of discovery that is required from viewers. In one urn, when you stare down into the recessed opening on the top, a glass taxidermy eye stares back up at you from the bottom. Others pieces contain gemstones and are brightly painted and/or colored with 24K gold leaf.

“Back in the ’80s, when I started my studies in metalsmithing and jewelry, it was taboo to cover metal with paint,” Westergard said. “It took me several years to give myself permission to break the rules and understand that being an artist meant you don’t have to justify what you're doing as long as you were making thoughtful and quality work. Painting my pieces creates emotional and expressive qualities that I can’t achieve with traditional metal finishes.”

In addition, Westergard uses electroforming tools available to her on campus to gild actual flowers and seed pods from her farm, coating them with layers of copper or silver and incorporating their natural forms into her urns. She likes the symbolism of capturing something that was living and turning it into a metal object that will forever remain in the work.

Westergard has made about 20 funerary urns and reliquaries, each one taking months to hammer form, saw, enamel, gild and paint. Some were made for friends and will eventually contain cremains, but for now they exist as objets d’art. Several of them are in a show that continues through Sept. 27 at the John Sloan Fine Arts Center Gallery at Lock Haven University of Pennsylvania.

Memorials are another type of object that she creates. The postcard for the show features a detail from the work that illustrates a tribute piece, which Westergard has titled “A Somber Tale.” It was inspired by a cougar she saw on her farm, plus a visit to the National Museum of Finland, where she saw piles of charred bones that were spread for ceremonial purposes by the medieval-era peoples of Estonia and Finland.

“This piece is about the Florida panther, which is on the endangered species list,” Westergard said. “When I started making this, there were only 35 left in the country … They're cut off there now, on the tip of Florida, and they can't mate with other cougars. They've become inbred, and this has resulted in deformities such as shortened and kinked tails. Hence the title ‘A Somber Tale’ — that little play on words, you know? Titles are important to me — that they all have significance.”

Westergard’s cougar heads also contain marigold flowers, plus elements that look like roots or arteries – used to symbolize the species’ struggle to survive.

Death and extinction are difficult subjects to address. She said she tries not to be too explicit in her work when talking about what lies beyond.

“However you view what happens after death, I try not to put too much description into that — allowing people to put their own views and beliefs into it. I strive to make contemplative works that are markers, which celebrate a life that has passed and evoke memories that remain,”  Westergard said.