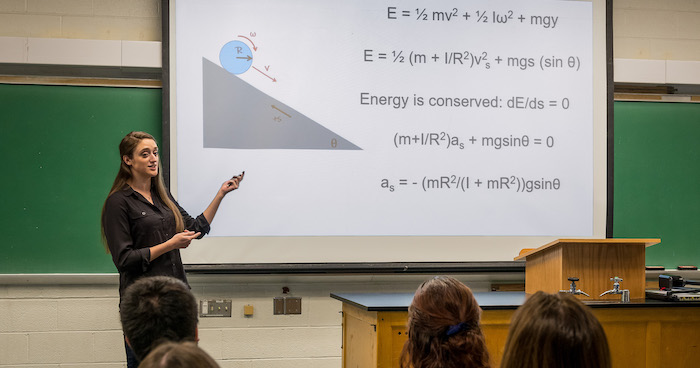 LAWRENCE — Courses in introductory physics are required for nearly all university STEM degree programs not only because physics is considered foundational to those disciplines, but also because it provides students practical experience in applied mathematics. The latter is especially true for calculus-based physics courses, which typically provide students their first exposure to using calculus outside of their math classes.

Now, a team of physicists and educators at the University of Kansas has developed a curriculum for college-level students that shows promise in helping students in introductory physics classes further practice and develop their calculus skills, especially those who test lower in core math abilities. They term the approach “energy-first.”

“It’s almost always the case that in introductory physics courses students are first taught mechanics in the context of forces. Later in the course, they are shown that they can also apply the concept of energy to solve most of the problems they already learned to solve with forces,” said co-author Christopher Fischer, engineering physics director and associate chair of physics & astronomy at KU. “We decided instead we want to teach energy first — because, number one, we think it's a more generally applicable way of thinking about physics. Number two, it also allows us to achieve our secondary goal of providing the students with more opportunities to use and practice their calculus skills.”

From fall 2015 to spring of this year, Fischer and his KU colleagues monitored students and performed testing in two introductory physics classes at KU taken mostly by students pursuing degrees in the physical sciences and engineering. For one, they devised an “energy-first” curriculum. For the other, they kept to a more traditional approach that taught students about forces before teaching them about energy.

The presence of two different physics courses using different curricula naturally provided an opportunity for the researchers to compare the outcomes of students in the two courses.

“We sought to compare, as best we could, apples to apples,” Fischer said. “In other words, we compared students who had the same ACT math scores but who took different physics courses to determine what effect our new physics curriculum had on student outcomes.”

The researchers worked with the KU Center for Teaching Excellence and the KU Office of Institutional Research & Planning to obtain the students' ACT math scores.

Fischer and his colleagues found engineering students taking the new “energy-first” physics curriculum tended to earn higher grades in subsequent engineering classes (for instance, in a mechanical engineering class for which either of the two introductory physics classes was a prerequisite).

“What we saw was the engineering students who were taking our new physics curriculum did better in their engineering classes,” he said.

Furthermore, the biggest benefits to student performance in downstream engineering classes were seen in students who had lower math ACT scores but took the “energy-first” physics class.

“The benefits were even larger the lower your initial math abilities were,” Fischer said. “So, engineering students who had lower ACT math scores had larger benefits from taking this new curriculum, which got us thinking maybe tasking students with solving more problems using calculus in this physics class is helping them with their applied math skills in general, as well as their physics skills.”

The KU researchers examined how well students had picked up on the physics content by performing more assessments, again finding those in the “energy-first” cohort had the edge over those in the old-style introductory physics class.

While these results certainly argue for the adoption of an “energy-first” approach, Fischer stressed because of the small sample size and limited demographics of students at only a single, large Midwestern university, the “energy-first” curriculum would need to be tried out on a broader level before concluding it was a superior method for teaching introductory physics to college-age students.

“We didn’t have tens of thousands of students in our study,” Fischer said. “We looked at only a few thousand. Thus, it’s important that other universities try this new curriculum to see if our results can be replicated. Indeed, we would happily welcome other institutions to collaborate with us to test if our results are robust — that’s essential.”

Additionally, the KU researchers hope to develop and implement an assessment to use in physics classes to understand math transference better.

“Is this new way of teaching physics helping students improve their applied calculus skills?” Fischer said. “To our knowledge, no one has built an assessment targeting that specific question. So, we're trying to figure out how to design such an instrument.”

Finally, Fischer said the team would like to build off the lessons learned from the implementation of the “energy-first” physics approach to modify the curriculum of other classes in the department.

“Is there a way we could design something similar, or at least take advantage of this sort of design methodology for our department’s algebra-based physics classes?” he said. “This naturally also motivates us to reach out to high schools to find collaborators to help us develop new and improved ways of teaching physics in a way that would be more useful for high school students.”