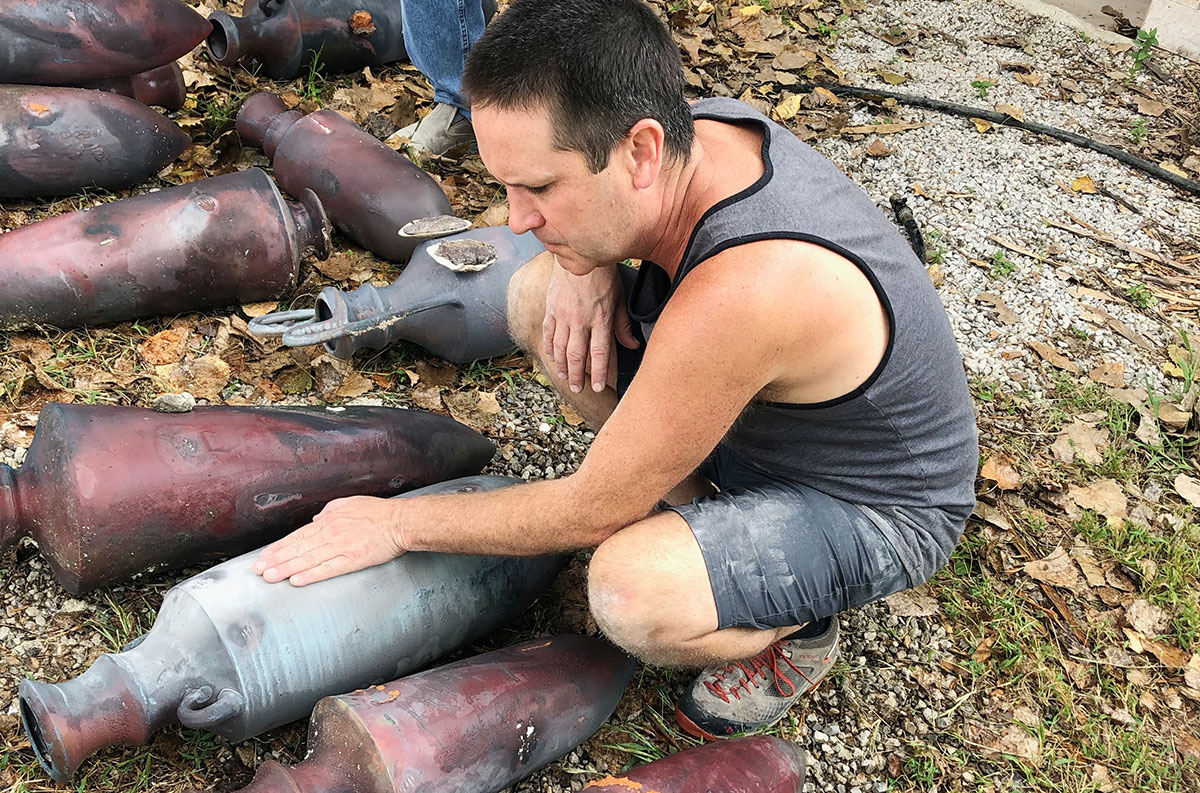 LAWRENCE – At first, it might seem unlikely for two University of Kansas Department of Visual Art colleagues to show their work together.

As he prepared a series of large vessels for their joint show opening Oct. 4 at the James May Gallery in Algoma, Wisconsin, Maude contemplated the similarities he sees in his and Jordan’s approaches to work.

“I've never really talked to her about it,” Maude said. “I don't know if she's intentionally referencing it, but I can see a postmodern influence in her work, but through the process of hand-dyeing and quilt making and using materials that come from a traditional craft practice. (Ed. note: See separate story on Jordan's work here.)

Maude spoke as he watched a computer-controlled laser cutter follow his program and etch a design onto the surface of a pot he had pulled from the fire a couple of days before. (See video at right)

And whereas some of Jordan’s fabric patterns remind Maude of Jasper Johns, he was intentionally referencing 1960s op artist Bridget Riley in the pattern he was etching onto the surface of his pot.

Maude said he has been inspired by working at artist residencies in Korea, China, New Zealand and Denmark.

“That’s become a major part of what I do,” he said. “And what I look at is not just historical ceramics, but what's happening in contemporary ceramic art, because they're all connected. It's the same thing as if you were a painter and you didn’t have an understanding of what happened in the Renaissance. …  It’s like you're a new mathematician and you didn't know the Pythagorean theorem. That would be odd, right? So I've been doing a lot of research into that, and a lot of the images that I'm laser-cutting onto the surfaces are images of historic vessels from China, ancient Greece and Native American imagery. Those are really the three areas that I've been sort of focusing on recently.”

Maude will mount about two dozen pieces on the walls for the Wisconsin exhibition, falling into two categories — ceramic plates that read almost like paintings and vessels that he calls amphorae. An amphora is a two-handled, narrow-necked jug of a type popularized by the ancient Greeks and Romans.

Onto the surface of both types of work, Maude will have laser-etched various designs.

He likes the way the precise and obviously not handmade laser cuts contrast with the clearly handmade ceramics.

Their mottled reddish surfaces are the result of hours of firing in the Chamney Barn “train kiln” (named for its resemblance to a locomotive engine) at over 2,000 degrees Fahrenheit and Maude’s introduction of wood ash into the firebox at various points in time. It’s a laborious process that starts with wheel throwing or piece building, proceeds to a gas-fueled bisque firing, usually includes the application of glaze and is followed by a final wood-kiln firing before moving to the etching machine. There is a lot of hauling around heavy yet fragile pieces from studio to kiln and back to studio before the public ever sees them. A ceramicist has to be prepared for breakage and failure, Maude said. But when it works, and the fire deposits the wood ash onto the glazed surfaces of the pots, resulting in unpredictable swirls and colors, it’s a type of magic.