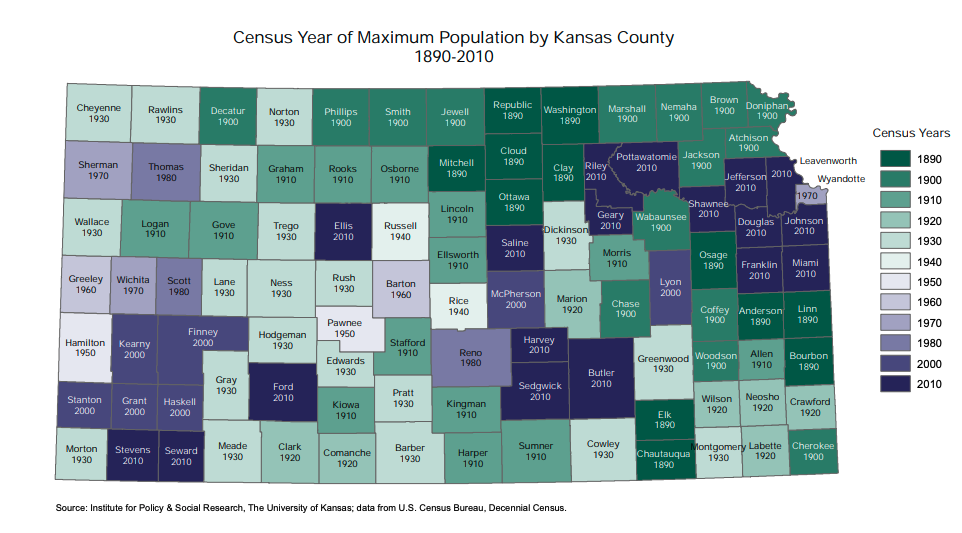 LAWRENCE — Sixty-eight of 105 counties in Kansas peaked in population before the Dust Bowl. The most recent Kansas Statistical Abstract includes this and other interesting facts about Kansas.

The Institute for Policy & Social Research at the University of Kansas recently published the 53rd Edition of the Kansas Statistical Abstract, which contains social and economic data broken down by state, county and city.

“It is important for business and community leaders as well as policymakers to understand the changing demographic, social and economic characteristics of Kansas,” said Genna Hurd, IPSR associate researcher and KSA editor. “The KSA covers data on Kansas from climate to crime, parks to population, and energy to employment. We are honored that IPSR and KU have been able to provide this service to the people of the state for more than 50 years.”

These visualizations reflect ongoing areas of interest for Kansans, such as a county-by-county look at the average small business loan amount at origination and a map of natural attractions and scenic byways in Kansas. And, with a presidential election coming up in 2020, one new map shows voter participation rates in the United States, by state, for the November 2016 election.

Each year, the KSA is compiled from state and federal data sources ranging from the Kansas Board of Regents to the Census Bureau. It is available at no cost from the IPSR website at https://ipsr.ku.edu/ksdata/ksah/.

“Working on the KSA has been an incredible and unique experience. I am lucky to be involved in research and data collection at IPSR, and I think the KSA showcases how useful this research can be on a local, state and national level,” said Abigail Byrd, IPSR student research assistant and KU 2019 Student Employee of the Year.

Search options »
Subscribe to KU Today
KU in the news
Newsweek — Thu, 01/16/2020
One of these NASA astronauts could be the first woman on the moon
The Los Angeles Times — Wed, 01/15/2020
Column: Trump’s China trade deal doesn’t even get us back to square one, despite immense cost
It's #FossilFriday , and there's an app for that. 📱 #KUdiscoveries https://t.co/HdHHdK379m
«»
Follow us on Twitter »
Why KU
Apply »
One of 34 U.S. public institutions in the prestigious Association of American Universities
44 nationally ranked graduate programs.
—U.S. News & World Report
Top 50 nationwide for size of library collection.
—ALA
5th nationwide for service to veterans —"Best for Vets: Colleges," Military Times