LAWRENCE — When food we’ve swallowed reaches our stomachs, it finds an acidic environment. The low pH in the stomach helps to begin digestion — and has been thought to kill the bacteria that hides in food that otherwise could harm our bodies. 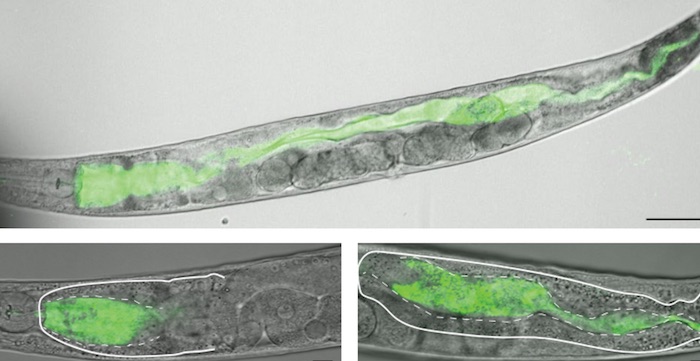 However, recent work from the Ackley and Chandler labs in the Department of Molecular Biosciences at the University of Kansas runs counter to this idea, instead suggesting lower pH in the digestive tract may make some bacterial pathogens even more harmful.

Their findings, published in the peer-reviewed journal PLOS Pathogens, could have implications for addressing the crisis of antibiotic resistance in bacterial infections around the world.

“These wormlike animals are transparent, so we can watch things that happen inside them quite easily,” said co-author Brian Ackley, associate professor of molecular biosciences at KU. “Using pH-sensitive chemicals developed at KU, called Kansas Reds, we were able to monitor the pH inside the digestive system and watch what happens when they eat harmful bacteria, compared to nonharmful bacteria.”

According to the KU researchers, under normal conditions while feeding on healthy bacteria, C. elegans digestive tracts are moderately acidic compared to human stomachs. But these model species’ stomachs also show regional differences within the digestive tract. When they ingest pathogens, they neutralize the acidic environment.

This observation suggested the animals could discriminate between good and bad bacteria, and harmful bacteria prompted a less acidic digestive tract in C. elegans — a result that runs counter to what one might expect if the acidic environment was generated to kill bacteria.

To test this, the researchers used animals with mutations in genes that helped regulate the pH in their digestive tracts.

“When animals had a more acidic digestive system, they were more likely to be affected by pathogenic bacteria — again counter to what one might guess if acidity was useful in killing harmful bugs that might sneak into the body with food,” Ackley said. “Our lab teams were able to show the effect on the animals was specifically due to the pH by adding a base to buffer the digestive tract. We used bicarbonate, the same agent our bodies use to neutralize stomach contents when they pass into our intestines. Neutralizing the pH in the mutant animals reverted the accelerated infection by the pathogenic bacteria.”

The KU researcher said different species react differently when their bodies sense pathogenic bacteria — but some biological reactions are common to many animals.

“A general response involves the creation of chemicals, like hydrogen peroxide or hypochlorous acid — aka bleach — near the bacteria, and then having specialized immune cells eat the dying bacteria,” Ackley said. “To keep our bodies safe, the immune system only deploys these defenses when it’s sure it is being invaded. The work in C. elegans may suggest a way the body can have these defenses ready to go at a moment’s notice — that is, keep the chemical environment in a moderately acidic state where making those chemicals is difficult, then, upon infection, simply neutralize the environment to deploy the defenses.”

The researchers believe there may be reasons to believe these systems could work similarly in people.

The genes they studied in C. elegans also exist in humans and control parts of the immune system. Further, research in other labs has shown occasions in humans where problems with regulating pH are associated with increased risk of infection. Moving forward, the researchers want to understand the mechanism at a deeper level.

“Our goal is to boost this natural defense system in people as a way to either avoid or reduce the use of antibiotics,” Ackley said. “Right now, our antibiotic use is unsustainable, and bacteria are evolving resistance at an alarming rate. If the system discovered in C. elegans is in fact still present in humans, it would suggest bacteria are much slower to adapt to this defensive strategy than they are to antibiotics.”