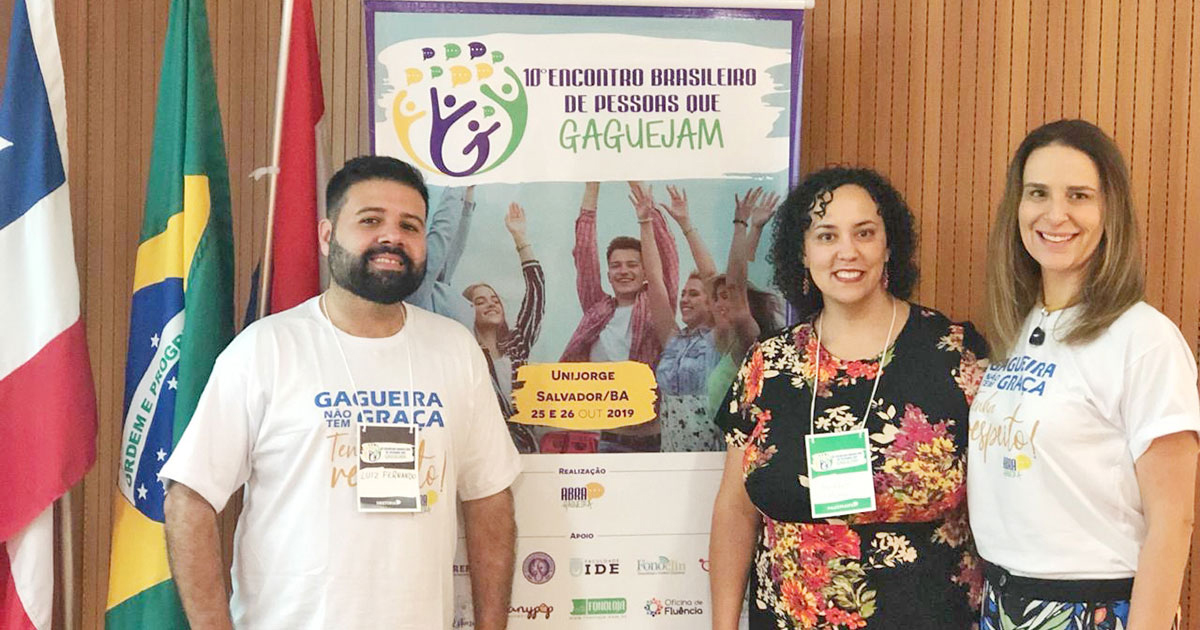 LAWRENCE – Ana Paula Mumy had been a speech-language pathologist for 15 years before her child’s bout of stuttering set her career on a whole new path working on the disorder.

Now a clinical assistant professor in the Department of Speech-Language-Hearing: Sciences & Disorders at the University of Kansas, Mumy is taking her interest in the treatment of stuttering across borders, drawing on her heritage as a native of Brazil to help translate a film about stuttering into Portuguese for South America’s largest market.

Mumy traveled to Brazil in late October to speak about and show the film “When I Stutter” at the annual conference of the Brazilian stuttering association, Abra Gagueira.

While there are many theories, Mumy said the cause of stuttering is not well understood, even among experts in the field. There is treatment, however. She hopes the new movie will increase public awareness about stuttering and its effect on those who stutter.

“There are a lot of myths about what causes it — that people are just putting it on, or that they can turn off a switch and stop stuttering,” Mumy said. “There's little tolerance for it ... even from a parent's standpoint. They just want it to go away. And if it doesn't, there's often a lot of guilt or shame or other emotions — both from the family perspective and the person's perspective. So there's a lot of emotional baggage that goes along with it, which affects their quality of life.”

Mumy understands the bewilderment others can feel when they encounter a person who stutters.

“You may not know exactly what's happening, like, ‘Why are they repeating?’ And sometimes it manifests itself in a very visible way,” she said. “They may move their head or their eyes, or it might even involve their hands or a foot tapping. It can become very visually distracting and confusing for the listener, so that creates a lot of stigma.”

Mumy said “When I Stutter,” created between 2012 and 2016 by fellow speech-language pathologist and now documentarian John Gomez, goes a long way to dispelling those myths.

“It has been a great teaching tool in various ways,” Mumy said. “My students watch the film, which gives them an immediate understanding of what stuttering is. They see how it manifests itself, both behaviorally and emotionally, and it connects them to the stuttering experience.”

Mumy met Gomez in 2017, at Camp Shout Out in Holton, Michigan, a residential summer camp for children and youths who stutter. His film had premiered a few months before that and soon thereafter screened at the Kansas International Film Festival, which is when Mumy saw it for the first time.

“I was completely wowed by it,” she said. “Not only does it explain the stuttering experience, it sheds light on many aspects that aren't as visible or understood.”

Mumy had worked in the field of speech pathology for 15 years before finding her “calling” in the treatment of stuttering, which is a subset of fluency disorders.

“I had been working in the schools,” Mumy said, “primarily with articulation and language.”

Because she is trilingual -– English, Spanish and Portuguese -– working with multilingual students became her sub-specialty within that field.

“I came to the realization when my son began to stutter that I needed to become a student and really figure this out so that I could best help him,” Mumy said. “That was the beginning of my journey.”

Now Mumy is working on board certification as a fluency specialist. She went to Camp Shout Out in 2015 and 2017 as a trainee, returning as a facilitator in 2019. She also has become a leader of a local chapter of the National Stuttering Association.

Mumy’s son, like 80 percent of youngsters who stutter (typical onset is age 3-5), recovered after a while. She says there is “a strong genetic component to stuttering, but also neurophysiological components,” and it apparently runs in her family, because her twin nephews still stutter at age 12.

“They're in the 20% of kids who will manage it for the rest of their lives,” Mumy said. She wants to help them and those like them through her work in the field.

“Fluency disorders is near and dear to my heart in a way that it has not been before,” she says.

By last year, “When I Stutter” had already been translated into Spanish and four other languages, so Mumy offered to help Gomez translate the film into Portuguese. The film contains subtitles, even in English, so for Mumy it was a matter of translating that text with the help of Daniela Zackiewicz, her colleague in Brazil, whom she had met through an online conference on fluency disorders.

“She founded what is essentially the Brazilian stuttering association, which is similar to the National Stuttering Association here,” Mumy said. “They have a website. They put out a lot of resources for families and professionals. They organize support groups. And then her clinic specializes in working with individuals who stutter.”

It is at the meeting of that association that Mumy spoke and showed the film Oct. 25. A theater owner showed it for free on 14 screens across the country in honor of International Stuttering Awareness Day on Oct. 22. It was also shown at Santa Casa University of São Paulo, which houses a speech-language pathology program.

Mumy is pleased to help address the issue in this way in the country where she lived until immigrating to the United States at age 10.

“The film has grown with support from different people,” she said. “We're going to have different avenues to get it out there. The reason this is significant is because out of all communication disorders in Brazil, stuttering is probably the one that carries the most stigma. And it's also largely misunderstood, like it is here.”

Photo: Ana Paula Mumy (center) spoke in October at the meeting of the Brazilian stuttering association with its current president, Luiz Fernando Ferreira (left), and its founder/director, Daniela Zackiewicz (right).