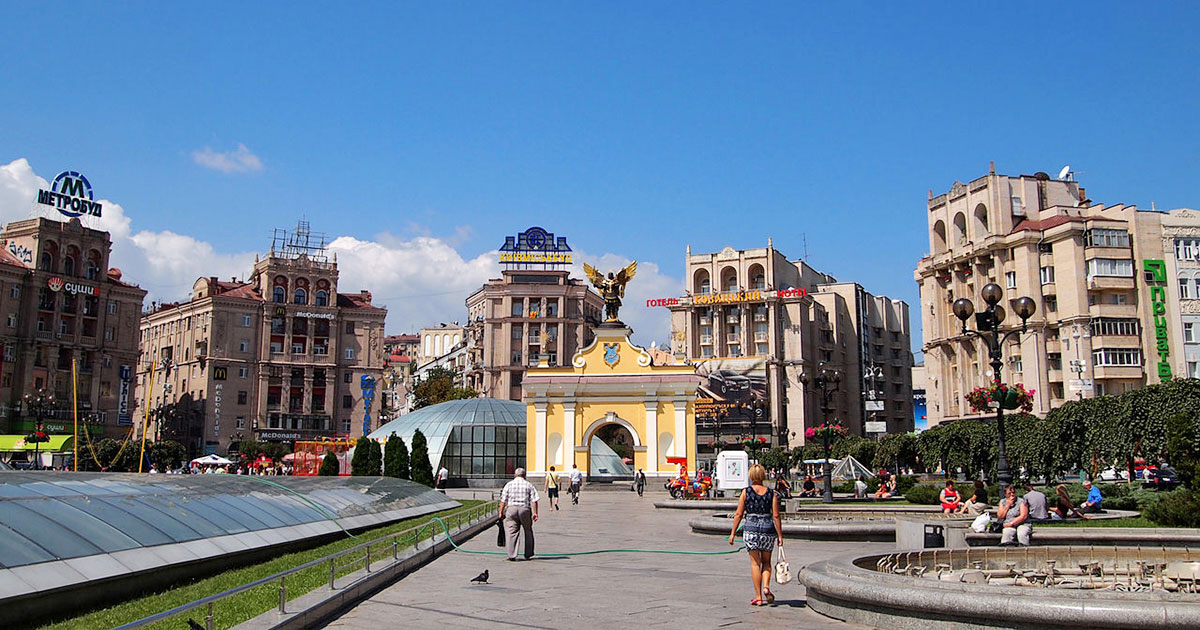 LAWRENCE — Why does even the acting U.S. ambassador to Ukraine mispronounce the name of its capital city, Kyiv?

He’s overcorrecting, trying to make up for a history of Russian colonialism, according to two Ukrainian natives who teach their native language at the University of Kansas.

Judging from a barrage of comments on social media, many Americans who grew up eating the dish Chicken Kiev and hearing the city name pronounced with two distinct syllables, the second one accented — (Key-EV) — find it confusing to read the current spelling “Kyiv” and to hear impeachment inquiry witnesses like Ambassador William Taylor say it as a single syllable rhyming with “Steve.”

However, neither pronunciation is correct, according to Oleksandra Wallo, assistant professor of Slavic languages & literatures. The confusion stems from Russia’s imperial domination of Ukraine stretching back to the 19th century, according to Wallo and her fellow Ukraine native, Vitaly Chernetsky. Chernetsky is an associate professor of Slavic languages & literatures and directs KU’s Center for Russian, East European & Eurasian Studies.

It was under a thorough program of Russification, which in the Soviet period even involved relocating thousands of Russian speakers to Ukraine, that Russo-Ukrainian place names and spellings like Kiev and Lvov, where Wallo was born, were promulgated. This, too, was when the locution “The Ukraine” was popularized, signifying it a region of a larger empire, such as the (United States) South.

Ever since Ukraine won its freedom with the breakup of the Soviet Union, its government and people have pressed for international recognition of their sovereignty to include a return to Ukrainian spellings and pronunciations like Kyiv and Lviv. In 2018, the foreign ministry launched the hashtag campaign #CorrectUA, including #KyivNotKiev

“There have been attempts since Ukraine regained independence,” Chernetsky said. “But even then, they were debating how to transliterate from Ukrainian properly, and there were a couple of alternative versions, some of them really clumsy looking, like K-Y-Y-I-V. The three vowels in a row definitely looked strange and confusing to people. So they settled on the preferred English-language spelling in the early 2000s, and gradually, slowly but surely, the Ukrainian Ministry of Foreign Affairs and Ukrainian embassies abroad started a campaign of awareness, encouraging people to adopt this spelling. I think the model they followed is how the Chinese back in the 1980s asked people to stop using ‘Peking’ and start using Beijing. It took a few years, but the whole rest of the world accepted this spelling 'Beijing,' and now nobody even shrugs or remembers. But we still have a food named Peking Duck, and the same thing for Chicken Kiev. You can still use the old spelling because that's an English name, a fixed name for a dish.”

And yet, Chernetsky noted, The New York Times only adopted the “Kyiv” spelling for the capital Nov. 18 – halfway through the first round of impeachment hearings.

“In the West, there has been a lot of resistance,” Chernetsky said, “which is very different compared to Beijing instead of Peking, or Mumbai instead of Bombay, because those came to be accepted fairly quickly. And there was no logical reason for that resistance.”

Perhaps some of the reticence can be attributed to the difficulty many Americans have pronouncing Kyiv the Ukrainian way. Chernetsky and Wallo noticed some diplomats on Capitol Hill as well as some national broadcast journalists slurring the syllables (two should remain, albeit with the first one accented) into one.

“I think they approximated it,” Chernetsky said. “They are not sure, so they are slurring these two vowels, and it becomes indistinct. You can have a very clear part one and part two. If you separate parts one and two, and do not make a glide or a diphthong, that actually is much easier to understand, because in the Ukrainian language, the vowels are clearly separated. They do not normally slide one into another.”

Another thing that fell harshly upon Wallo’s ear during the impeachment inquiry was when U.S. diplomats referred to “the” Ukraine.

“It's ironic that in a hearing that is discussing the links between Russia and Ukraine and the U.S., people who are completely on the side of Ukraine in this story still keep saying ‘the Ukraine,’ therefore implying that it’s part of Russia,” Wallo said.

“It's not malicious,” Chernetsky said. “This is how you were taught in secondary school. You internalize that rule, and it requires an effort to change. Sometimes people are moving fast in their conversation, or they can still be confused. So we would like them not to be confused.”

As for Burisma, the Ukraine-based natural gas company whose payments to Hunter Biden have embroiled it in the current impeachment proceedings, its name has no particular meaning in Ukrainian language, the professors say. In that way, it’s akin to the names some pharmaceutical companies give their products.

“It just sounds cool,” Wallo said. “It’s mysterious in its meaning and sounds foreign to the local ear.”

Photo: Maidan Nezalezhnosti, or Independence Square, is the heart of Kyiv and was the site of dramatic protests during the 2004 Orange and 2014 Euromaidan revolutions. Credit: Tiia Monto / Wikimedia Commons