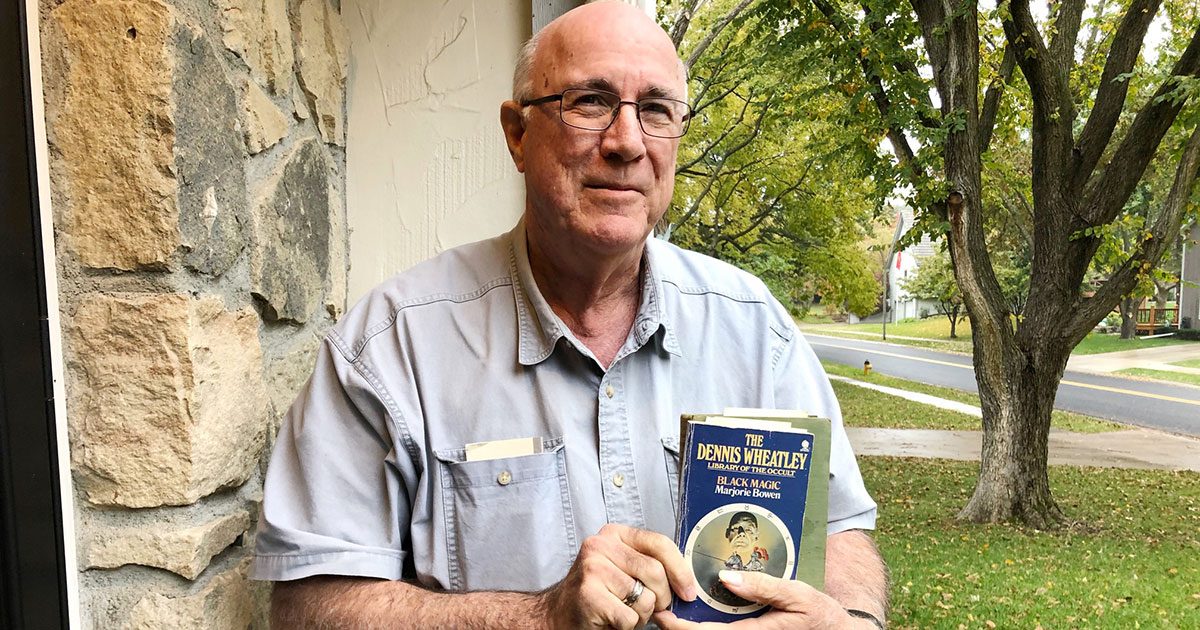 LAWRENCE – “Daphne du Maurier gets all the press, but Marjorie Bowen was every bit as good,” said John Tibbetts, University of Kansas associate professor of film & media studies. “In fact, Bowen wrote a short story that I believe du Maurier ripped off for ‘Rebecca!’”

Tibbetts has become so fascinated with the early 20th-century British writer – once popular, critically acclaimed and immensely prolific, but now forgotten – that not only has he written a new biography, “The Furies of Marjorie Bowen,” but he is planning a “Marjorie Bowen Reader” in hopes of bringing her out-of-print work to a new generation.

Tibbetts has always loved science fiction, horror, ghostly tales and the gothic – a product, he said, of his father’s interest in the same. He first encountered Bowen when he found her 1949 short story collection, “The Bishop of Hell,” in his father’s library.

Her name occurred to him in 2016, Tibbetts said, when it came time to choose a subject for his yearly contribution to Weird Fiction Review, in which he celebrates an overlooked author.

“I remembered that little book of short stories and took it off of what is now my own bookshelf and read and read some more,” Tibbetts said, “and I thought, ‘This woman is amazing.’”

While Bowen published a couple of autobiographical memoirs during her lifetime (1885-1952), Tibbetts’ book is the first biography. The KU researcher received the cooperation of the Bowen estate, including access to some never-published materials. And he convinced Pulitzer Prize-winning critic Michael Dirda, another Bowen fan, to write the book’s foreword.

At this great remove, Tibbetts said, it’s difficult to comprehend the level of artistic and commercial success Bowen achieved, though it’s almost impossible not to admire what it took to rise from an impoverished, unloved and uneducated childhood to become something like the Stephen King of her day.

Bowen began writing her first novel, “The Viper of Milan,” when she was just 16 years old and continued writing at a pace that still beggars belief. She published more than 150 novels and biographies, more than 200 short stories and dozens of essays of social commentary.

Not only did she enjoy commercial success, but Bowen drew the admiration of such writers as Mark Twain, Graham Greene and Arthur Conan Doyle.

Part of the problem of her current obscurity is that she had a variety of pen names, of which Marjorie Bowen was but one, used primarily for weird fiction of a type Tibbetts calls “female gothic.” She was born Gabrielle Margaret Vere Campbell and, in addition to Marjorie Bowen, published under the noms de plume Joseph Shearing (crime fiction), George R. Preedy (historical novels), Robert Paye, John Winch and Margaret Campbell.

“Together,” Tibbetts wrote in the book’s introduction, “they constitute a major body of work that, although unheralded today, I argue constitutes a formidable contribution to the art of the short story in the first half of the 20th century.”

A handful of Bowen’s tales were turned into British motion pictures, the best known of which is 1948’s “Blanche Fury,” starring Stewart Granger.

Today, even if they are all out of print, Tibbetts contends that Bowen’s works are worth reading. In addition to her compelling weird tales of poisoners and ghosts, Tibbetts wrote, Bowen’s oeuvre contains “devastating indictments of the stifling conventions of society and gender that impede women’s struggle against male authority.”

While Protestant champion William of Orange was perhaps her ultimate hero, Tibbetts said, Bowen did more than dabble in the mysticism and theosophy of her day.

“She was a God-fearing Christian mother,” Tibbetts said. “But in her own philosophy around spiritual inclinations, I think she was very much a pagan. She didn't worship at altars or anything like that, but I think she kept her mind free of dogma. She had a healthy respect for mythology and classical history and was a very merciless critic of the excesses of orthodox Christianity.

“I'm not saying she was an atheist. I'm saying she was kind of a pantheist, believing that when we're gone, we're going to return to dust. We're part of the universe. And that, rather than bemoan our fate, we should take advantage of the life we have now. ... It's the courage to find beauty in darkness. It's the courage to find beauty in despair, beauty in nihilism, beauty in transgression, cynicism and corruption. To look the world squarely in the eye and say, ‘OK, having said all that, there is beauty here also.’ It's a brave kind of stance.”

Photo: John Tibbetts with one of the Marjorie Bowen books he collected while writing a biography of the prolific early 20th-century British writer. Credit: Rick Hellman/KU  News Service