LAWRENCE — A University of Kansas student, who is preparing for a career that will help him expand equitable health care and educational opportunities for all, has earned a George Marshall Scholarship that will fund graduate study in the United Kingdom. 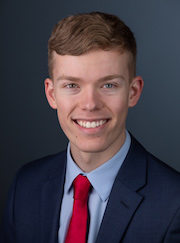 Sam Steuart, a senior from Topeka majoring in American studies and biochemistry with a minor in Spanish, earned the prestigious scholarship after becoming KU’s 20th Harry S. Truman Scholar last year. He is one of 46 students from across the country to win the Marshall Scholarship, which provides funding for U.S. students of high academic ability to study in the United Kingdom.

Steuart said the Marshall Scholarship was a reflection of the many people who had helped him get to where he is now, including all of his teachers from the schools he attended in the Shawnee Heights school district.

“My family and community believed and invested in me, and they gave so much to ensure that I grew up in an environment that supported my health and education,” Steuart said. “It was because of what was invested in me that I had the ambition and opportunity to do what I’m doing now.”

"I congratulate Sam on this latest recognition of his work in support of better health care and educational outcomes for all,” said Chancellor Douglas A. Girod. “He is an exemplary Jayhawk who is an inspiration for all who cross his path, and I look forward to seeing all he will accomplish as he continues his work in the future."

Steuart plans to apply to Oxford University, where he intends to pursue a degree in comparative social policy. Specifically, he said he hoped to be able to analyze how different countries approach welfare policies, learning what works well and what doesn’t. Then, he said, he could bring that knowledge back to the U.S. and apply it to his own career.

The scholarship is designed to strengthen ties between the United States and the United Kingdom, and it is named after former U.S. Secretary of State George Marshall. Other students interested in applying for the Marshall Scholarship or other national scholarships may contact KU’s Office of Fellowships at fellowships@ku.edu.

Steuart said he appreciated that he was able to pair the Marshall Scholarship with the Truman Scholarship.

Marshall served under Truman when he developed the Marshall Plan that provided economic recovery to Western Europe after World War II.

Steuart said he also appreciated the connection to his work, which will involve studying why certain welfare policies typically enjoy stronger support in Europe than in the United States. Some of those policies came about because of the Marshall Plan, Steuart said.

“These will be skills I will need for my future as I learn how to shape the politics and grow public support for policies that provide health care and educational opportunities for all our citizens,” he said.

After completing graduate study in England, Steuart said he would apply the funding from the Truman Scholarship toward additional study in medical school in the United States. Steuart said he wants to earn graduate degrees in medicine and in public health.

He plans to pursue a career path as a professor in medicine and public health, eventually leading to leadership positions at federal, state or local agencies related to health care.

And, one day, he said he would consider pursuing elected office.

“Really, it’s about advocating for communities who have historically not had equal access to health care and education,” Steuart said.

Sam is the son of Renae and Jim Steuart of Topeka.