LAWRENCE — Transgender rights have made significant progress in recent years thanks to court decisions and high-profile transgender individuals putting a spotlight on the issue. Much discrimination still exists, though, especially for young people without political power. 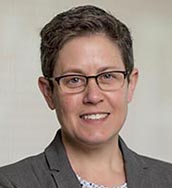 Kyle Velte, associate professor of law at the University of Kansas, argues that combining the efforts to ensure Title IX’s protections of transgender students with ongoing work to challenge birth certificate correction statutes holds transformative potential for both movements. The requirements for gender confirmation surgery to change birth certificates are especially burdensome.

“A lot of transgender folks don’t want to have gender confirmation surgery for a variety of reasons, or they can’t afford it,” Velte said. “That opens them up to a variety of problems in life, especially for young people. I think there’s still a lot of transphobia in society. I’m trying to connect how Title IX protecting students and changing birth certificate requirements can work together. I think students can help lend emotional appeal to these stories, and adults can help with the political side.”

Velte has written an article published in the American University Washington College of Law’s Journal of Gender, Social Policy & the Law that is the first to document how Title IX protects transgender students and connects it to the effort to change laws making it difficult to change gender assignment on birth certificates.

Numerous situations in life require a person to show ID, whether it is at a job interview, voting, boarding a flight, buying alcohol or many others. That can present problems for transgender individuals, especially minors who are required to present birth certificates to schools. More youths are coming out as transgender, yet 16 states require gender confirmation surgery before one may correct the gender marker on a birth certificate. Three states don’t allow correction of gender under any circumstance. That results in students facing many problems at school, chiefly use of restrooms and locker rooms that match their gender identification.

In the article, Velte presents detailed arguments about how Title IX’s federal protection of students on the basis of sex prevents discrimination against transgender students. However, across the country, schools require transgender students to use bathrooms and locker rooms that match their gender at birth. Such policies can be extremely harmful, leading to students attempting to avoid using bathrooms at all, which in turn leads to negative health outcomes such as dehydration and kidney or bladder infections. Those risks, in addition to the bullying transgender students may face, can result in suicide.

The article’s second part summarizes the legal landscape for both movements, outlining decisions and cases currently in the courts. It also points out the importance of identity documents in society for all and the unique challenges that result for transgender individuals. Additionally, it documents the origins of sex-separated facilities in the early 19th century as a means of protecting the virtue of women who were increasingly entering the workplace. Velte also gives in-depth analysis of Title IX, constitutional equal protection, state anti-discrimination laws and school district policies.

Through the article, Velte argued that “the surgical requirement is counterfactual, unconstitutional, unlawful and unethical.” In the article’s third part, she outlined how modern science shows the requirement is counterfactual and argues it violates the First Amendment protections of the right to refrain from speaking and right to be free from endorsing a government message. The requirement also violates due process rights to liberty, dignity, bodily autonomy, gender autonomy and privacy.

The article’s final part presents a proposal to advance the interests of both transgender K-12 schoolchildren and transgender adults challenging surgical requirements for correcting identity documents. Velte points out the strategic benefits of a coalition, how to build such a coalition and how to avoid the disconnect between those fighting for gay and lesbian rights from the movement for transgender rights.

Allowing individuals to change the gender status on birth certificates without requiring surgery is not only the right legal thing to do, but policies requiring students to use facilities matching their gender at birth are unnecessary, Velte said. There are no biological or health reasons for such policies, and there have been zero cases of transgender individuals assaulting someone in a public bathroom, counter to frequent arguments made in support of the policies. In fact, transgender individuals are much more likely to be the victim of such attacks.

“Things are changing for the better as science and society realize gender is not a binary construct,” Velte said. “Medical professionals and psychologists would say these are ridiculous requirements, and I’d like to see the law reflect that as well.”