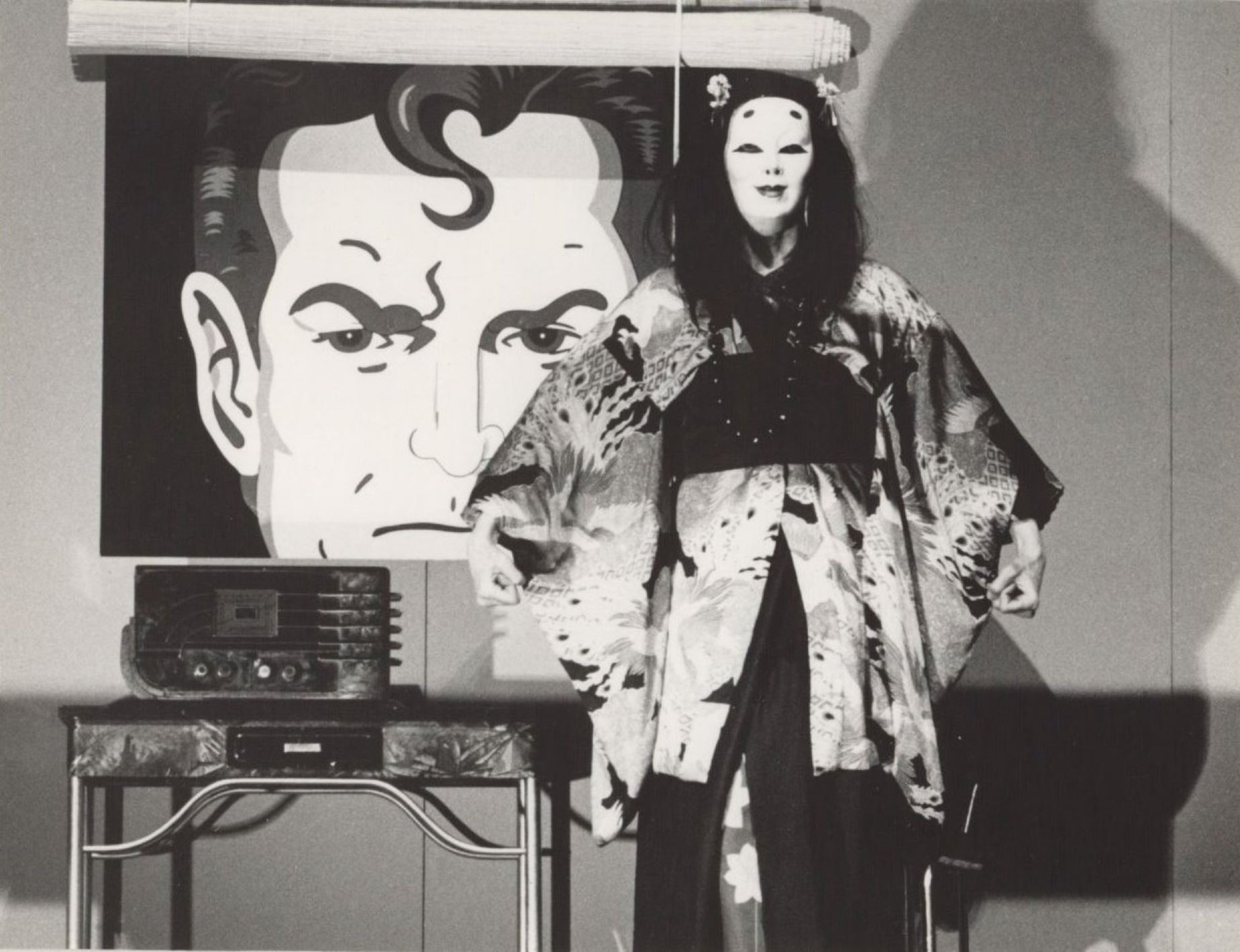 LAWRENCE — An exhibition opening Saturday, Feb. 29, at the Spencer Museum of Art highlights a lesser-known aspect of Lawrence-based artist Roger Shimomura’s career: performance. Between 1984 and 2002, Shimomura wrote and directed 13 pieces that were performed multiple times at venues across the United States. “Staging Shimomura” includes digitally remastered footage from these performances, costumes and props, photographs from production, and other documentation, along with a variety of Shimomura’s prints and paintings throughout his career.

Although Shimomura describes himself as a painter, performance art allowed him to expand and activate central themes in his work through live action. Like his paintings, Shimomura’s performances are deeply biographical, with much of the source material coming from his grandmother Toku’s diaries and tape recordings of daily life. Shimomura and his family, including Toku, were forced to live in an internment camp in Idaho as part of the incarceration of Japanese Americans during World War II. Shimomura said the need to tell stories from Toku's recordings and diary entries pushed him toward performance work. 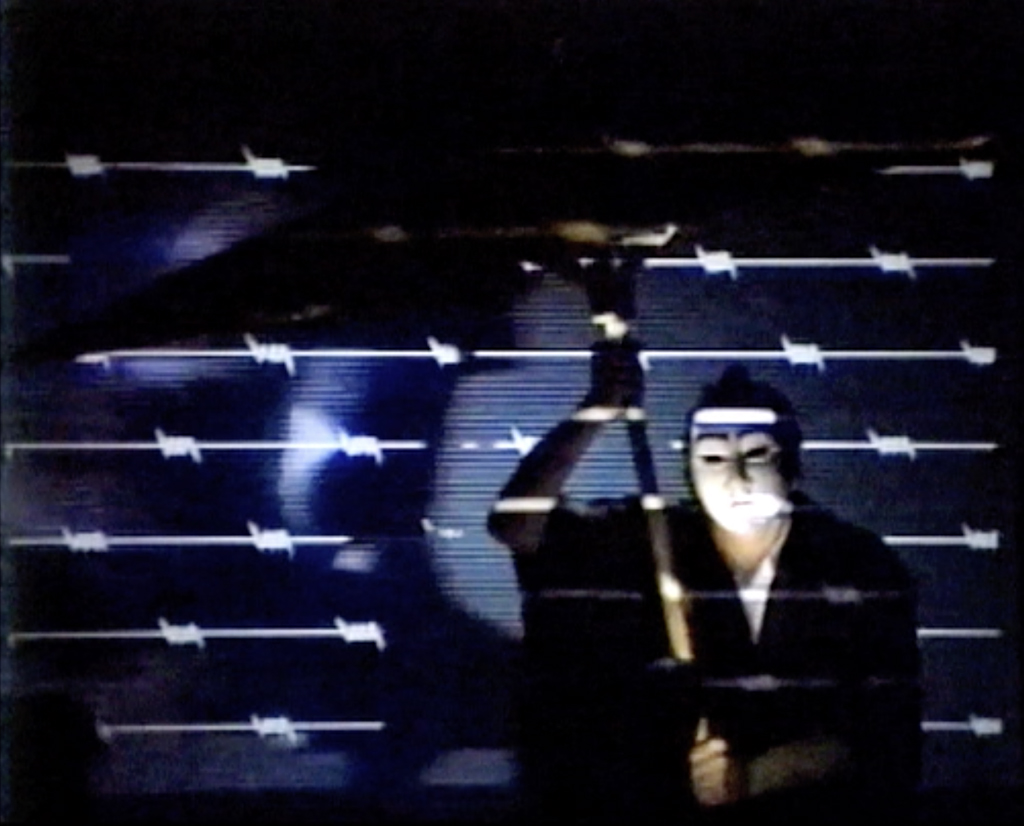 “You can’t paint those things. I mean, you could paint them, but that’s just one way of depicting the experience. A performance allows you to pick up what was before that, and during that, and after that,” Shimomura said. “Having that kind of material is what really shifted my center from painting to performance.”

Spencer Curator Kris Ercums said the dialogue between Shimomura’s paintings and performances created in the exhibition offers visitors a more expansive experience of the artist’s work.

“The performance work really expands his practice and the meanings of his paintings,” Ercums said. “They push even harder on you than the paintings do because of the live action. That’s what’s so compelling about them. They’re much more direct.”

“Staging Shimomura” will help audiences discover a deeper understanding of Shimomura’s rich universe of personal experiences and pop culture references that examine the dark underbelly of stereotypes and racism that continue to resonate with issues in America today.

A lecture series featuring scholars and artists along with a variety of other public programs will further explore themes in the exhibition.

“Staging Shimomura” will remain on view through June 21. The exhibition and related programs are supported by the E. Rhodes and Leona B. Carpenter Foundation, the H. Neil Mecaskey Jr. Foundation, the Franklin D. Murphy Lecture Fund of the Kress Foundation Department of Art History, KU Student Senate, the Linda Inman Bailey Exhibitions Fund and the Friends of the Art Museum.

March 24
Staging Shimomura Lecture Series: Hiroko Ikegami
5:30-6:30 p.m. / Spencer Museum of Art, Perkins Central Court
Hiroko Ikegami (Kobe University) examines Roger Shimomura’s “Seven Kabuki Plays” against the backdrop of his “Diary” paintings, both of which draw on his grandmother’s diaries from the period of the attack on Pearl Harbor and the subsequent incarceration of Japanese Americans.

April 5
Day of Creativity
1-4 p.m. / Spencer Museum of Art
Explore processes and ideas related to theater, performance and identity with hands-on activities, demonstrations and performances that celebrate creativity in various forms. Free and fun for all ages.

May 7
Staging Shimomura Lecture Series: Scott Tsuchitani
5:30-6:30 p.m. / Spencer Museum of Art, Perkins Central Court
Scott Tsuchitani, an interdisciplinary artist and cinematographer based in San Francisco, discusses the influence of Roger Shimomura’s work on other artists, including himself.

Search options »
Subscribe to KU Today
KU in the news
Politico — Tue, 01/12/2021
Trump’s abrupt shift on COVID shots may sow more chaos
The New York Times — Sat, 01/09/2021
Pressure grows for states to open vaccines to more groups of people
RT @UnivOfKansas : A snake that had been part of the herpetology collection at KU’s Biodiversity Institute & Natural History Museum since 20…
«»
Follow us on Twitter »
Why KU
Apply »
One of 34 U.S. public institutions in the prestigious Association of American Universities
44 nationally ranked graduate programs.
—U.S. News & World Report
Top 50 nationwide for size of library collection.
—ALA
5th nationwide for service to veterans —"Best for Vets: Colleges," Military Times