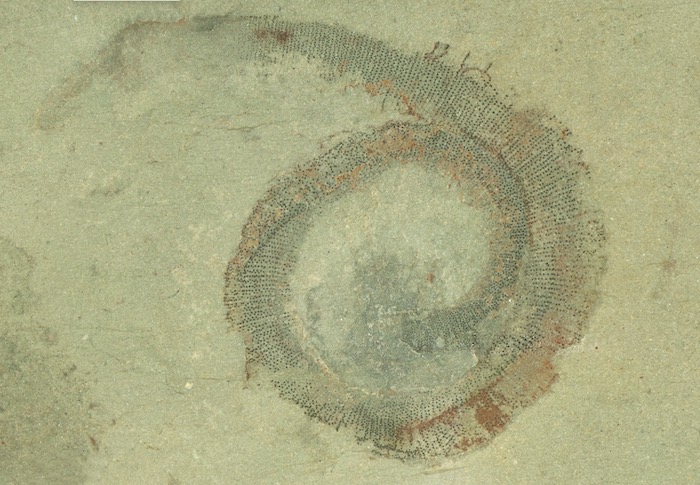 LAWRENCE — When a partial fossil specimen of a primordial marine worm was unearthed in Utah in 1969, scientists had a tough go identifying it. Usually, such worms are recognized and categorized by the arrangement of little knobs on their plates. But in this case, the worm’s plates were oddly smooth, and important bits of the worm were missing altogether.

Discouraged, researchers placed the mystery worm in a “wastebasket” genus called Palaeoscolex, and interest in the lowly critter waned for the next 50 years.

That all changed recently when Paul Jamison, a teacher from Logan, Utah, and private collector, and his student Riley Smith were hunting fossils in the Spence Shale in Utah, a 506-million-year-old geologic unit housing a plethora of exceptionally preserved soft-bodied and biomineralized fossils. (Paleontologists call such a mother lode of fossils a “Lagerstätte.”) There, Smith discovered a second, more thoroughly preserved example of the worm.

Eventually, thanks to Jamison’s donation, the new fossil specimen arrived at the University of Kansas Biodiversity Institute, where Anna Whitaker, a graduate student in museum studies, researched and analyzed the worm with scanning electron microscopes, energy-dispersive X-ray spectrometry and optical microscopy.

At last, Whitaker determined the worm represented a new genus of Cambrian sea worm heretofore unknown to science. She’s the lead author of a description of the worm just published in the peer-reviewed paleontological journal PalZ.

“Before the new species that we acquired there was only one specimen known from the Spence Shale,” she said. “But with our new specimen we discovered it had characteristics that the original specimen didn't have. So, we were able to update that description, and based on these new characteristics — we decided it didn't fit in its old genus. So, we moved it to a new one.”

Whitaker and her colleagues — Jamison, James Schiffbauer of the University of Missouri and Julien Kimmig of KU’s Biodiversity Institute — named the new genus Utahscolex.

“We think they're closely related to priapulid worms that exist today — you can find them in the oceans, and they are very similar to priapulids based on their mouth parts,” Whitaker said. “What’s characteristic about these guys is that they have a proboscis that can evert, so it can turn itself inside out and it’s covered with spines — that’s how it grabs food and sucks it in. So, it behaved very similarly to modern priapulid worms.”

While today, Utah is not a place you’d look for marine life, the case was different 506 million years ago, when creatures preserved in the Spence Shale were fossilized.

“The Spence Shale was a shelf system, and it’s really interesting because it preserves a lot of environments — nearshore to even deeper offshore, which is kind of unusual for a Lagerstätte, and especially during the Cambrian. These animals were living in kind of a muddy substrate. This worm was a carnivore, so it was preying on other critters. But there would have been whole diversity of animals — sponges, and trilobites scuttling along. We have very large, for the time, bivalve arthropods that would be predators. The Spence has a very large diversity of arthropods. It would have looked completely alien to us today.”

Whitaker hopes to complete her master’s degree this spring, then to attend the University of Toronto to earn her doctorate. The description of Utahscolex is Whitaker’s first academic publication, but she hopes it won’t be her last. She said the opportunity to perform such research is a chief reason for attending KU.

“I came for the museum studies program,” she said. “It’s one of the best in the country, and the program’s flexibility has allowed me to focus on natural history collections, which is what I hopefully will have a career in, and also gain work experience in the collections and do research — so it's kind of everything I was looking for in the program.”

While ancient sea worms could strike many as a meaninglessly obscure subject for such intense interest and research, Whitaker said filling in gaps in the fossil record leads to a broader understanding of evolutionary processes and offers more granular details about the tree of life.

“I know some people might say, ‘Why should we care about these?’” she said. “But the taxonomy of naming all these species is really an old practice that started in the 1700s. It underpins all the science that we do today. Looking at biodiversity through time, we have to know the species diversity; we have to know as correctly as we can how many species there were and how they were related to each other. This supports our understanding of — as we move into bigger and bigger, broader picture — how we can interpret this fossil record correctly, or as best we can.”

Image: The new specimen of the worm Utahscolex ratcliffei, which preserves the everted mouthparts (upper left). The body of the worm is covered of rows of tiny round plates, which were used to redescribe the species. Credit: Whitaker, et. al.