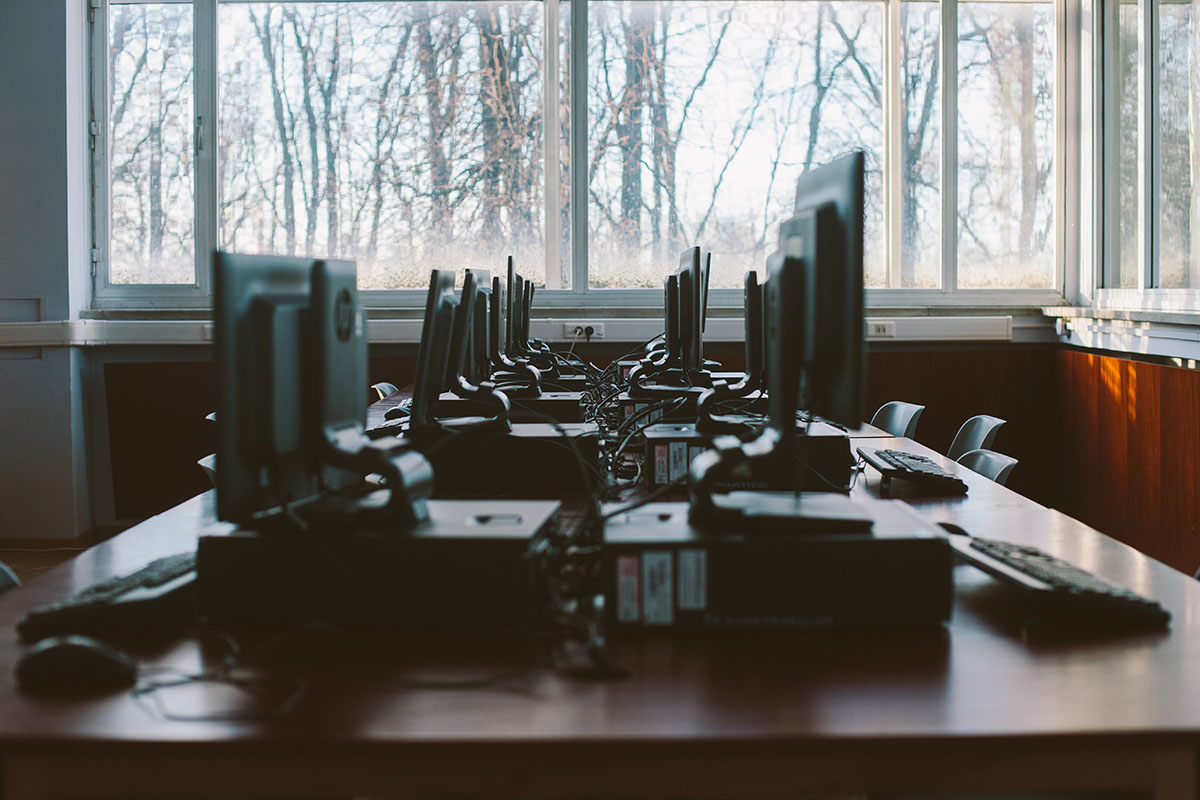 LAWRENCE — About one-third of the U.S. population has no computer and/or broadband internet access at home, or they can only connect through mobile devices such as smartphones. Many of these individuals turn to public libraries as their primary provider of computers and internet access. While an important resource and a public good, those shared library computers have significant limitations, including the inability of users to save their functional preferences or protect their privacy and security settings.

With every visit to a library, these computer users must start their digital lives anew. And some evidence suggests that marginalized, public-access internet users face a host of privacy, security and surveillance threats.

A team of researchers at the University of Kansas has coined the term “digitally homeless” to describe this population’s experiences. Led by Bill Staples, professor of sociology and director of the Surveillance Studies Research Center; Perry Alexander, AT&T Foundation Distinguished Professor of Electrical Engineering & Computer Science and director of the Information and Telecommunication Technology Center; and Drew Davidson, assistant professor of electrical engineering & computer science, the team has recently been awarded a new grant from the National Science Foundation titled “Safeguarding and Enhancing the Experience of Public Internet Users,” funded through NSF’s Secure and Trustworthy Cyberspace program.

The two-year, $516,000 grant will support research about how public internet users navigate the internet and what security threats they face. One outcome of this work will be development of a device the team calls PUPS — public user privacy and security — an isolated, portable, virtual computing environment on a USB stick. It will provide a “digital home” to users, giving them a functional, seamless computing experience from one session and device to the next.

“The goal of our collaboration is to identify the relational points where computing challenges and social and economic vulnerabilities intersect,” Staples, the lead investigator, said. “Our aim is to develop inexpensive, easily replicated and scalable technology that could be adopted widely by public libraries in many different communities to address the security and functional challenges of digital homelessness.”

The proposal continues research that Staples and Alexander have been conducting with support from the NSF since 2017. With that NSF grant, “Digital Inequalities in the Heartland: Exploring the Information Security Experiences of Marginalized Internet Users,” Staples and Alexander’s team studied how people use public library computers in two diverse communities in northeast Kansas, then developed a prototype of PUPS.

Staples, Alexander, and Davidson will expand and diversify their research on public library computer users, working in new locations to observe and interview library patrons and staff. In addition, the team will conduct experiments to learn about the security and surveillance threats that these users face. For example, public computers are usually wiped between sessions, deleting cookies that track users during browser sessions. But it may be the case that they are identified across different use sessions through server-side browser tagging. This practice allows targeted marketing and user optimization, and it may also allow for surveillance of users and discrimination based on user profiles.

The team will then further develop the PUPS device, then distribute it at research sites to monitor use and evaluate its usability and efficacy.

“The PUPS has the potential to offer a new resource to a particularly vulnerable population. We’ve designed the PUPS prototype specifically with the digital homelessness in mind, offering the benefits of a personal computer while taking advantage of public computer infrastructure. The advantage of an interdisciplinary collaboration like this one is that we can refine the prototype in a way that’s very responsive to our target population’s needs through continued study,” Davidson said.

Their research will yield an open-source device for public computer users to maintain privacy settings, software and secure passwords from session to session. The team also will contribute to the currently limited academic literature on digitally disenfranchised people.

In addition to Staples, Alexander, and Davidson, students will be supported by the grant and gaining invaluable research experience. Contributing graduate researchers have included Matt Comi, Walter Goettlich, Sarah Smith and Marissa Wiley.

The work of the project will be supported by KU’s Institute for Policy & Social Research, whose staff managed their previous grant, assisted with development of this proposal, and will manage this grant.

Search options »
Subscribe to KU Today
KU in the news
Bloomberg — Mon, 01/17/2022
MLK Day to draw divisions as politicians misuse his words
The Los Angeles Times — Mon, 01/17/2022
What did King, a Black clergyman, know about foreign policy? He knew plenty (opinion)
Compared to many other planets, TOI-674 B is relatively easy to study, says @KUPhysicsAstro researcher Yoni Brande… https://t.co/1ab5MMDLMU
«»
Follow us on Twitter »
Why KU
Apply »
One of 34 U.S. public institutions in the prestigious Association of American Universities
44 nationally ranked graduate programs.
—U.S. News & World Report
Top 50 nationwide for size of library collection.
—ALA
5th nationwide for service to veterans —"Best for Vets: Colleges," Military Times